In October 2015, we discovered a malicious payload file targeting Apple iOS devices. After investigating, we believe the payload belongs to a new iOS Trojan family that we’re calling “TinyV”. In December 2015, Chinese users reported they were infected by this malware. After further research, we found the malware has been repackaged into several pirated iOS apps that are available for download via multiple channels. In this blog, we will discuss how the TinyV Trojan spreads and how it works.

TinyV was repackaged into some pirated iOS apps for jailbroken devices. Infected iOS apps include “Watermelon Player (西瓜播放器)”, “Youku (优酷)”, “iQiYi (爱奇艺)” and others. After repackaging, these apps were uploaded to websites for downloading.

The infected Watermelon Player was available from its official website xigua[.]com. It is advertised as an app for watching pirated videos online for free. The infected versions of Youku, iQiYi, and other apps were hosted on third party iOS app download sites such as iosqgg[.]com and piqu[.]com (which belongs to a tool named “PiQu Apple Helper 批趣苹果助手”). They were advertised as modified ad-free versions of those popular video players (in China). This URL will re-direct the iOS device to download a PLIST file hosted in “appsre[.]com” and then to install an enterprise app described by this PLIST file. According to the PLIST file, the IPA installer file to be downloaded is “pq_com.youku.YouKu.5.0.ipa”, which is also hosted on appsre[.]com. Figure 4. The infected app installer was actually hosted on appsre.com

The loaded xg.png will invoke its -[hlNDkcAzamMgoaQm downloadDeb] method to connect with the C2 server wx[.]iosyy.me and fetch configuration information. The configuration supplied by the C2 specified a “debUrl” that points to the URL of a ZIP file, and specified a “shName” with the value “zipinstall”.

Figure 6. The extra Mach-O dynamic library accesses a URL supplied by its C2 to download a malicious payload

In the infected Youku, “macro_off@2x.png” will access another page on the same C2 server to get its configuration. This time the “debUrl” value is encrypted with an XOR algorithm. Despite the attempt at obfuscation, after decrypting with the key “0xaf”, the same URL is shown.

After getting configuration from its C2, TinyV will download a ZIP file from the given “debUrl” value. The ZIP file examined here was hosted on another C2 server, apt[.]appstt.com. While we were writing this report, the URL returned a 404 error. However, when we initially investigated it in late October, the URL was still alive and a “deb.zip” file was downloaded.

In the deb.zip, there are 4 files:

After downloading and decompressing this ZIP file, xg.png will execute the zipinstall script to install locka and com.locka.plist as a launch daemon as detailed below. Figure 7. The malicious executable file is installed as a launch daemon

The locka file implements the main malicious behaviors of TinyV, including: 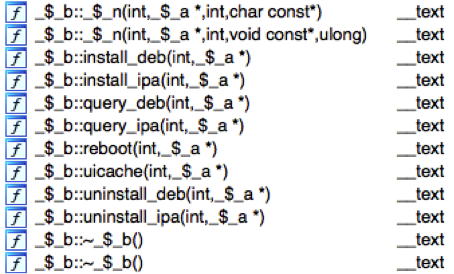 Figure 8. Some of the functions in locka

Just like the previously discovered Trojan YiSpecter, this locka implemented IPA file installation and uninstallation via iOS private APIs is defined in the MobileInstallation framework. Another interesting characteristic of this Trojan is the code in locka was obfuscated with name mangling and junk code insertion techniques, which made it much harder to reverse engineer. Figure 10. The malicious code is inserted with a lot of junk code

It’s also worth noting that we found a function named “ClassStaticFunctionHook” that implemented a runtime hook by itself in a piece of repackaged code. Right now the function is only used to hook an advertisement SDK’s code. However, it could be used to implement much more dangerous behaviors in the infected apps. Previously discovered iOS malware uses the CydiaSubstrate framework to hook. This is the first time we have seen a real world iOS malware sample implement standalone hooking functionality.

On December 12, TinyV began to promote an iOS jailbreak tweak named “XZ Helper (协奏助手)”. Many victims in China found the XY Helper tweak on their iOS devices. Because of TinyV’s code implementation and variety of C2 server commands, even if a victim deleted the promoted tweak, TinyV would immediately install it again. Some victims discussed this abnormal phenomenon in forums including Weiphone and Zhihu. So far we have only observed the malware infecting users in mainland China.

As always, we suggest iOS users do not jailbreak their devices or install any enterprise apps from untrusted sources.

We would like to thank CDSQ from WeipTech for sharing infection cases with us.