By Vicky Ray and Robert Falcone

Unit 42 recently identified a targeted attack against an individual working for the Foreign Ministry of Uzbekistan in China. A spear-phishing email was sent to a diplomat of the Embassy of Uzbekistan who is likely based in Beijing, China. In this report, we’ll review how the actors attempted to exploit CVE-2012-0158 to install the NetTraveler Trojan.

On December 12, 2015, a spear-phishing email was sent to a diplomat of the Embassy of Uzbekistan. The body and subject of the email suggests that the email was spoofed to look like it was sent by the Russian Foreign Ministry and the attachment may contain an official annual report on CHS (Council of Heads of Member States), who form the SCO (Shanghai Cooperation Organization).

It is interesting to note the reference of Ufa in the file name, as the city of Ufa in Russia hosted the SCO BRICS Summit on July 9 and 10, 2015. SCO and BRICS (Brazil, Russia, India, China and South Africa) are intergovernmental international organizations focused on issues of regional security and economic cooperation. Our analysis shows that actors attempted to exploit CVE-2012-0158 to install NetTraveler Trojan. Upon successful exploitation, the attachment will install the trojan known as NetTraveler using a DLL side-loading attack technique. The NetTraveler trojan has been known to be used in targeted cyber espionage attacks for more than a decade by nation state threat actors and continues to be used to target its victims and exfiltrate data.

The DLL side-loading attack technique has been gaining adoption within the cyber espionage realm by threat actors to bypass traditional security systems. Unit 42 also published a blog last year discussing an unrelated attack where the DLL side-loading technique was used.

Figure 3 illustrates the exploitation and the infection flow of the malware. Figure 3 Overview of the infection flow

The payload (DW20.exe) is a self-extracting (SFX) RAR archive that contains the following files: Figure 4 The payload(DW20.exe) is a SFX RAR archive

The SFX RAR uses the following configuration to launch the embedded executable, which is a legitimate application created by Symantec that will side load the rastls.dll DLL:

The figure below shows that the config file, ‘Sycmentec.config’ is encrypted.

The ‘Sycmentec.config’ file can be decrypted using a single byte XOR algorithm using ‘0x77’ as a key. The ‘rastls.dll’ DLL will load and decrypt this file. The decrypted data starts with shellcode that is responsible for loading an embedded DLL and executing it. The embedded DLL is the functional payload, which is a variant of the NetTraveler Trojan that has the following attributes: During execution, NetTraveler creates a mutex of ‘YOYWOW!657’, as shown in Figure 8 below to avoid running multiple instances of its code.

The code then enumerates the 'netsvcs' services, which are services that run within the process space of svchost.exe, specifically ignoring services named ‘6to4’ and ‘Ias’ as these services have been used by other malware families.

When it finds another netsvcs service with a name not matching these two names, it will delete the file associated with the service and copy the ‘rastls.dll’ file to that folder using ‘<service name>ve.dll’ as the filename as shown in Figure 9 below. 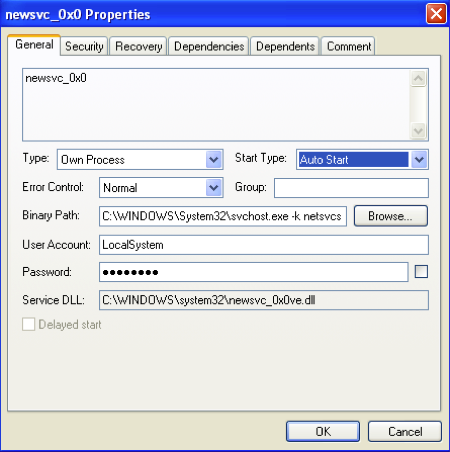 The malware will then change the binary path of the service to point to this new filename and copies the "Sycmentec.config" file to the same folder and the ‘config.dat’ file to the following location:

However, the NetTraveler payload reads the last ‘0xb0’ bytes from the rastls.dll file and uses it to create the "config.dat" file that is later saved to "CERTAPL.DLL". This technique hides the true C2 server from researchers that do not have access to both the rastls.dll and Sycmentec.config files. The "U00P" and "K00P" values are decrypted using a simple algorithm that subtracts the index and then subtracts ten from each character, which is depicted in the following:

At the time of analysis, the domain voennovosti[.]com was resolving to IP ‘98.126.38[.]107’, which is hosted by Krypt Technologies. A report published by Kaspersky Labs in 2011 on NetTraveler also mentions the C2 servers were being hosted by Krypt Technolgies. This web hosting service provider continues to be the hosting provider of choice for the threat actors behind NetTraveler. NetTraveler has been used to target diplomats, embassies and government institutions for over a decade, and remains the tool of choice by the adversaries behind these cyber espionage campaigns. The use of NetTraveler for such a long period of time shows its effectiveness and success by the adversaries in targeting their victims with impunity.

As seen in this case, the threat actors continue to evolve and employ new techniques within their modus operandi, like ‘DLL side-loading’ to install malware. It is likely that the use of ‘DLL side loading’ attack technique will increase due to it’s effectiveness to bypass traditional security systems.

It is essential to raise awareness on such attacks to better protect organizations from adversaries who maybe backed by nation states.