Anonymous proxies play an important role in protecting one’s privacy while on the Internet; however, when unsuspecting individuals have their systems turned into proxies without their consent, it can create a dangerous situation. Palo Alto Networks researchers recently discovered a family of malware, designated ProxyBack, and observed over 20 versions that have been used to infect systems as far back as March 2014.

The primary distribution observed by Palo Alto Networks is focused heavily in Europe with most targets belonging to educational institutions.

In this report, we’ll dive into the behavior of a recent sample of ProxyBack, examine how it establishes the victim proxy, and analyze the traffic using this service.

To be an effective proxy, network traffic must be able to flow through the proxy unhindered. In a typical setup, this may be accomplished by allowing a proxy system to receive traffic over a network socket designated for this function and then forwarding the network traffic on as its own. The problem for a non-legitimate proxy is that the network traffic destined to reach the proxy server, which is a compromised system, will usually not be able to reach it because of firewalls or other network based restrictions put in place to protect systems. ProxyBack gets over this hurdle by building a reverse tunnel over TCP to an attacker controlled proxy server. In other words, it has the victim proxy make the initial call home, thus allowing the proxy server to send its traffic through the tunnel and out to the Internet, or to other devices internal to that network. To establish this tunnel, ProxyBack will initially make a connection to a web server hosting a PHP file that simply contains a URL to another PHP file on the same server. This subsequent PHP file will be used by the malware to send commands to the initial web server and fetch information used to setup its proxy connection. Each GET Request Method observed since early 2014 contains a User-Agent string of “pb”, which makes it trivial to detect.

The first variable passed, “getip”, to the “command” parameter retrieves the public IP address of the victim proxy.

The second variable passed, “getid”, retrieves the ID for the victim proxy, which will be used in subsequent commands to keep track of the victim proxy. From the initial assessment of this malware until today, the ID number has continued to sequentially increment. So far, it has increased by 11,149, which may be indicative of the number of victim proxies compromised.

The third variable passed, “ghl”, to the “command” parameter receives an encoded base64 string for a URL. This URL led to another PHP file, which contained a URL to another PHP file; however, the subsequent URLs were never live during analysis.

The fourth variable passed, “dl”, receives an encoded base64 string, “fA==”, which signifies the delimiter to be used in the subsequent command.

Additionally, the ProxyBack malware is capable of reporting the following operating system versions, which suggests it can run each of them. 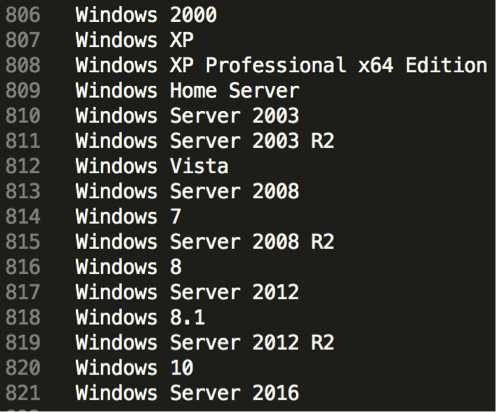 The content returned from the fifth command remains similar between versions. The “version” variable receives an encoded base64 string that includes the version number of the malware and a URL to the malware version, delimited by the previously retrieved character. Another change noted is that versions were previously in the following format, “17.exe”, “20.exe”, and “41.exe”; whereas in November 2015 they started to include the first three letters of the web server domain in which they are hosted, such as “sof1.8.exe” on “softwearfounds[.]com” and “sky2.1.exe” on “skyjfasters[.]com”.

At this point, if the version running deviates from the version returned, it will use the GET Request Method and download the version provided in the output of the “version” variable. After that, the process restarts from the beginning but will keep the same ID value that was previously assigned.

The next variable passed, “getbackconnect”, to the “command” parameter is used to get the IP address and port of the remote system with which the victim proxy should establish the reverse tunnel.

Once the ProxyBack malware has this information, it begins the process of building the TCP session to be used over the course of this session. For this particular sample, the destination port provided was “495”. After the TCP handshake completes, a series of packets with PSHACK flags are transmitted back and forth containing data appended to them that control the flow of this process.

The first packet in this series is sent from the victim proxy to the malicious proxy server and includes a sequence number, followed by a null byte, followed by two bytes that serve as delimiters for the rest of the data.

The proxy server replies with the next packet in the sequence that tells the malware what IP and port to pass as variables in the next GET Method Request to the original server. The last two bytes tell the malware which new socket to open a TCP connection to for transferring the data that is being sent through the TCP tunnel.

ProxyBack now passes the variable “update2” to the “command” parameter with the additional data received from the PSHACK. The web server simply replies with an “Ok”.

The next PSHACK in the series is sent to the victim proxy and tells the malware to create a TCP session over the additional port provided in the second sequence of the PSHACK packets.

The victim proxy sends the 4th PSHACK packet to let the proxy server know it’s ready to continue on the new port.

Similar to the first packet in this PSHACK series, the proxy server initializes the session with a delimiter to be used in subsequent commands.

Also of note is the value 0x02 after the sequence number. This seems to indicate additional commands for this phase are to follow, or possibly the number of packets to expect. The victim proxy responds with the value 0x0500 and then the proxy server sends the final packet in this sequence, which contains an IP address and a destination port, which the ProxyBack malware will open a TCP session with.

After the handshake is complete, the victim proxy notifies the proxy server of the source IP and source port used in the three-way handshake as the last PSHACK packet in sequence 5.

As the last validation step, the proxy server issues a GET Request Method through the tunnel established over TCP/5114 and the victim proxy forwards it on.

The return data from 188.116.23.99 is sent back to 46.165.222.212 over TCP/5114 as data in a PSHACK packet, which completes the validation phase. It’s interesting to note that the proxy server IP and “secret” key are included in the URI. The returned data is a serialized PHP formatted configuration file with information about the web server hosting it. The “secret_string” variable observed in the URI and the configuration file has not changed since the first samples were seen in March of 2014. Every 27 minutes, the ProxyBack malware on the victim machine will send the “update” variable to the “command” parameter on the original web server hosting the PHP file to see if it needs to change malicious proxies or update it’s software.

To wrap up this section, below are the available commands found in the old and new versions of the ProxyBack malware. Throughout the period this malware was observed, neither “log” nor “update” variables were ever passed to the “command” parameter. When a system infected with ProxyBack was actively operating, there was an sizeable volume of traffic being routed through. It was clear that there were legitimate, benign, users of the SOCKS proxy, along with malicious users as well, further adding weight to the conclusion that this is a proxy service. Users of these services should be aware that their traffic is neither anonymous nor safe from tampering.

Upon review of the web traffic routed through our victim proxy, the majority of that traffic appeared to source from an automated system creating fake accounts and soliciting people across dating sites like “farmersonly.com”, “match.com”, “meetme.com”, and “okcupid.com”. The legitimate traffic included sites like eBay, Twitter, Craigslist, Facebook, Wikipedia, and more.

Another website that stood out during this review was “buyproxy.ru”, which was the only site that seemed to match a proxy service found within our captures. Looking deeper into this traffic, we see a GET Request Method to http://buyproxy.ru/proxy/ at less than 4 hours into our capture, which lists our victim proxy. What’s interesting to note here is that our victim proxy’s reverse PTR record is shown in the sixth column, whereas in the second column, our malicious proxy server is listed for users to presumably connect to. In an odd twist of fate, the same users of the service also betray it.

When visiting the buyproxy[.]ru site, it states in their FAQ that they have been in business for over seven years, they provide only private proxy servers that are not in public proxy bases, they average between 700-3,000 proxies per day, proxies usually live between 4 to 24 hours, nothing is logged, and they use a “BackEnd proxy” which shares an IP for access but distributes the exit. In addition, on their main page they tout that the connections are encrypted and use a “proprietary technology of traffic tunneling”.

When accessing the site with a registered account, you are presented with three proxy options: 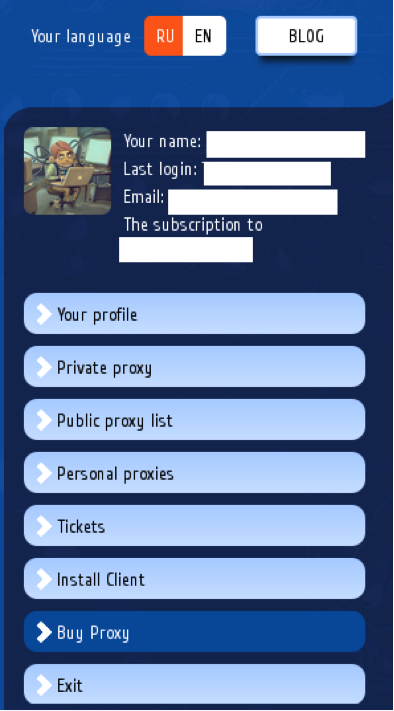 On the “Private proxy” page we find our victim proxy under the United States, among others. One thing that immediately stands out is yellow highlighted entries, which follow the same characteristics as our victim proxy. The IP address differs from the listed domain, possibly implying they are also victim proxies.