The Sofacy threat group continues to carry out attacks using their Zebrocy tool. We first wrote about the Zebrocy tool in a blog that discussed Sofacy’s parallel attack campaigns during the first quarter of 2018, and more recently during Sofacy attacks in late October and early November. The developers of Zebrocy have once again created a new version the Trojan using a different programming language, specifically the Go language. The use of a different programming language to create a functionally similar Trojan is not new to this group, as past Zebrocy variants have been developed in AutoIt, Delphi, VB.NET, C# and Visual C++. While we cannot be certain the impetus for this, we believe the threat group uses multiple languages to create their Trojans to make them differ structurally and visually to make detection more difficult.

We have seen two separate attacks deliver the Go variant of Zebrocy. The first attack occurred on October 11 and relied on a spear-phishing email with an LNK shortcut attachment. The LNK shortcut is meant to run a series of PowerShell scripts to extract a payload from the shortcut to install and execute; however, the PowerShell scripts were coded incorrectly and could not install or run the payload as delivered. Therefore, the first observed attack mentioned in this blog could not be successful, but the tactics, techniques and indicators are worth discussing for situational awareness. More recently, we have seen Sofacy delivering the Go variant of Zebrocy using a document related to the Dear Joohn attack campaign that occurred in mid-October through mid-November.

The attack occurred on October 11, 2018 and involved a spear-phishing email (T1193) discussing the effects of US sanctions on the Russian economy. The “From” address and the signature included the name of an individual at the targeted organization. The “To” field in the delivery email was blank, which makes us believe that the targeted individuals were included in the “Bcc” field of this email. Figure 1 shows the delivery email used in this attack. 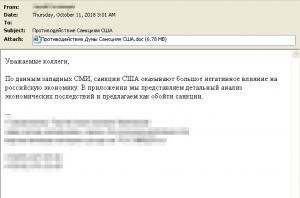 The PowerShell script above attempts to extract another PowerShell script directly from the LNK shortcut file, which it would then execute. For unknown reasons, the actor that created this LNK shortcut included the incorrect filename for the LNK file, specifically C5 regional conference and training workshop on community policing(1).docx.lnk instead of the delivery document Противодействие Думы Санкциям США.doc.  The LNK shortcut filename does not match the filename delivered in the email, so this attack would never be successful as the PowerShell script above would be unable to obtain the payload to install on the system. The C5 regional conference and training workshop on community policing(1).docx.lnk filename included in this LNK file may be an artifact from a previous attack using the same delivery LNK and payload.

Had the attackers included the correct filename to the LNK delivery in the script above, it would have located the PowerShell script in the LNK file by using a hardcoded offset of "3659", which it would have used to seek 3659 bytes into the LNK file. The script would then read a hardcoded number of bytes, specifically 6,924,764 bytes from this offset and executes it. The resulting PowerShell script obtained from within the LNK file has the following contents, of which we have trimmed some of the encoded data and replaced it with "[..snip..]" for brevity:

This final PowerShell script is responsible for decoding an executable and Word document that it will write to the system in the %PUBLIC% folder with names C5 regional conference and training workshop on community policing(1).exe and C5 regional conference and training workshop on community policing(1).docx, respectively. The decoded content written to the Word document contains the decoy content seen in Figure 2 (SHA256:b6b2f6aae80cba3fa142bd216decc1f6db024a5ab46d9c21cf6e4c1ab0bbe58b), which in this specific case is an agenda for a conference that occurred between June 18 and 20, 2018 in Dushanbe, Tajikistan sponsored by Saferworld and the United States Institute of Peace. 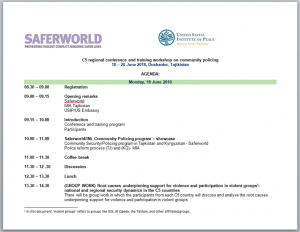 The decoded executable is the payload (SHA256: fcf03bf5ef4babce577dd13483391344e957fd2c855624c9f0573880b8cba62e) whose developer wrote in the Go Language, which appears to be a variant of the Zebrocy Trojan that we have previously analyzed. The use of another language to develop a similar Trojan in functionality to Zebrocy is fitting for this threat group, as we have previously seen this group create variants of Zebrocy in AutoIt, Delphi and C++. The similarities between this payload and previous Zebrocy variants include general high-level capabilities as well as some more specific overlaps. Like other Zebrocy samples, this Zebrocy variant written in Go does initial collection on the compromised system (T1119), exfiltrates this information to the C2 server and attempts to download, install and execute a payload from the C2. The Go variant also has some more specific overlaps in its functionality, including:

The Go variant of Zebrocy attempts to evade automated analysis by checking the executable filename of its process for the “)” character. If the filename does not contain a “)” character, the Trojan immediately exits without executing its functional code. The Trojan looks for this character specifically, because it expects to run as a file named C5 regional conference and training workshop on community policing(1).exe.

The C2 communications between the Trojan and its C2 has the following structure:

The C2 server will respond to this HTTP POST request with ascii hexadecimal bytes that the payload will decode and save to the following file (T1105):

The second attack we observed delivering the Zebrocy variant written in the Go language is related to the Dear Joohn attacks that we have previously published. While the Dear Joohn campaign occurred in mid-October to mid-November 2018, the delivery document (SHA256: 346e5dc097b8653842b5b4acfad21e223b7fca976fb82b8c10d9fa4f3747dfa0) that ultimately installed the Go Zebrocy sample was created on December 3, 2018. This delivery document had an author name of Joohn, which is how we clustered the Dear Joohn delivery documents for that campaign.

The delivery document is configured to obtain a remote template from hxxps://bit[.]ly/2G8QrgL (T1102), as seen in the following from the document’s word/_rels/settings.xml.rels file:

The hxxps://bit[.]ly/2G8QrgL shortened link redirects to the remote template hosted at a URL of hxxp://89.37.226[.]123/Templates/NormalOld.dotm. Previous Dear Joohn delivery documents did not use a shortened link to obtain its remote template, which suggests a shift in techniques used in this campaign. Fortunately for us, the shortened link provides some statistics on how many visitors accessed the link and their country of origin. When accessed on December 5, 2018, Figure 4 shows the statistics for the shortened link, showing the link was created on December 3, 2018 at 12:56 PM, which was visited 75 times from mostly from Turkey. 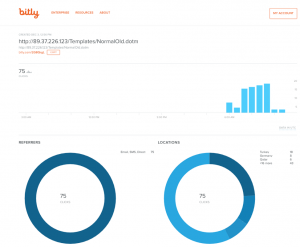 Figure 4 Statistics on visitors to the shortened link used to point to remote template (Accessed December 5, 2018)

The remote template downloaded via this shortened link contains a macro similar to other Dear Joohn samples. The macro differs as it extracts a ZIP from the remote template file (SHA256: c817aab6e8dcaeaeae817a85ba209c0ca690be58b91e6cff0e3f0660336f9506) and saves it to a file named driver_pack.zip. The archive contains an executable named driver_pack.exe (SHA256: b48b3d46ebfa6af8a25c007f77e6ed3c32fe4c6478311b8b0c7d6f4f8c82de76), which is a WinRAR SFX executable archive that contains another executable named comsvc.exe. The WinRAR SFX archive extracts the comsvc.exe payload using the following SFX script:

Like other Zebrocy variants, this Go Zebrocy malware checks the path of the running process to make sure it contains comsvc, as it would if executed by the delivery document that would eventually save the payload to comsvc.exe. If the Go Zebrocy sample was not run as comsvc.exe, it will send an HTTP POST request to google[.]com unlike other Zebrocy variants that will just exit, which we believe this is an attempt to further evade heuristic detection. Figure 5 shows the HTTP request sent to google[.]com.

The data sent in the HTTP POST request in Figure 5 decodes to <#0>0<##0><#1>1<##1><#2>1<##2>, which does not necessarily have any purpose other than filling the same HTTP POST data delimiters that Go Zebrocy will use when communicating with the C2. In the event that the sample was run as comsvc.exe, the Trojan will reach out to the following URL to communicate with its C2 server:

The Go Zebrocy tool will get the volume serial number, take a screenshot of the system (T1113) and gather system specific information using a legitimate library called psutil that is available on Github. The Trojan will call the Host Info function from the psutil library that will effectively gather platform information (operating system, version etc.), the time the system was booted, the system uptime, the system’s GUID, and process IDs for running processes (T1057). The Zebrocy variant will send an HTTP POST request (T1071) to the above URL with post data structured as follows:

The hexadecimal characters in the HTTP POST data are used as delimiters, which represent the following:

The C2 will respond to the above request with a hexadecimal encoded payload that the Trojan will save to the system and execute. The Trojan writes the secondary payload to the following file:

Before executing the dropped file, the Trojan will create an auto run registry key (T1060) to have the secondary payload run each time the user logs in using the following command line (T1059):

The HTTP POST request sent via HTTPS will look as follows, specifically including the first four bytes of the volume serial number and the first four characters of the hostname within the post data in a field labeled "l" as seen in Figure 6.

The Sofacy group continues to use variants of the Zebrocy payload in its attack campaigns. Developers of Zebrocy continue to create new variants of the Trojan using different coding languages, which in this particular case used the Go language. The adversaries made some drastic errors to the delivery LNK shortcut, which made this attack seemingly ineffective. Regardless of the attack’s effectiveness, the techniques and indicators we observed still provide analytical points for correlation and should be included in an organizations security defenses as the group may use the payload and infrastructure in future attacks. It is also apparent that the Sofacy group will use these new variants of Zebrocy across multiple different campaigns, as the Go variant of Zebrocy was delivered via the LNK shortcut and a Dear Joohn delivery document.

Palo Alto customers can protect themselves against this threat by: