Malicious actors employ a range of tools to achieve their objectives. One of the most damaging activities an actor pursues is the theft of authentication information, whether it applies to business or personal accounts. Unless specifically mitigated, this theft often allows an unauthorized actor to masquerade as the victim, either achieving immediate gains or creating a platform from which progressive attack campaigns may launch.

There are a number of threats that endanger the critical secrecy of credentials, including poor operational security practices, social engineering, man-in-the-middle attacks, password hash dumping and cracking, and surveillance malware. In this post, Unit 42 examines various trends in a malware threat set within the surveillance malware category: Predator Pain and its latest derivative, HawkEye.

Surveillance malware covers a broad range of capabilities, including:

Each of these capabilities can be qualified by its scope (i.e., types of information collected) and method (ranging in techniques and sophistication). Additionally, some surveillance software includes its own exfiltration mechanism, while others may depend on external software to accomplish the transfer of captured information.

Both Predator Pain and HawkEye are considered keyloggers, but they also include additional features, such as web browser and e-mail client credential dumping, display capture, and captured information exfiltration. HawkEye is openly sold on a commercial website, whereas Predator Pain is usually acquired through underground forums. Associated features have made this set of malware popular with malicious actors across a number of motivations; however, the most prevalent motivation remains cyber crime, in which stolen information is directly exploited or sold for financial gain. (A list of additional reading links is found at the end of this blog post for anyone interested in learning more about this specific threat set.)

The following sections describe Predator Pain and HawkEye trending and analysis conducted by Unit 42 from July 2015 through September 2015. We leveraged the Palo Alto Networks AutoFocus service, under which this threat set is tagged as PredatorPain.

Almost all of the adversaries Unit 42 observed employing this malware threat set harvest publicly disclosed or leaked e-mail addresses to construct phishing campaign targeting lists. These lists are mostly indiscriminant, with malicious actors seeking any opportunistic gains they can glean from “shotgun” style attack campaigns. The natural exposure of businesses with publicly advertised e-mail addresses (e.g., sales@<domain> or info@<domain>) makes for easy targeting of what typically represents key organizational e-mail distributions. In other words, these distributions normally reach a number of staff at the target organization who are motivated by their importance to business, increasing the likelihood of them inadvertently executing malicious code on their systems.

Observed sessions revealed an interesting pattern in distribution volume ramping up on Sunday for peaks over Monday through Wednesday, with significant volume dropping from Thursday onward. We believe this corresponds with focused business targeting early in the workweek, per the previously noted targeting process employed by most cyber crime actors.

Figure 2 shows the delivery methods observed for the Predator Pain and HawkEye threat set over the period of interest, with e-mail by far being the preferred delivery method for adversaries. With these distribution methods in mind, Figure 3 shows an AutoFocus visualization for the 80 countries Unit 42 observed as targeted by the Predator Pain and Hawkeye threat set during the noted time period. Not surprisingly, the top-ten list of most highly targeted countries includes 7 of the 23 wealthiest in the world, based on GDP per capita:

The top ten targeted industries accounted for 82% of sessions:

We suggest three reasons based on this combination of observed countries and industries targeted:

The Predator Pain and HawkEye set of malware is feature rich, compared to most other keyloggers. The following are the capabilities Unit 42 observed as most often enabled for this threat set during the focal time period (ordered by prevalence):

This threat set includes three main methods of exfiltration: E-mail, PHP-based Web Panel, and FTP. Figure 4 shows the HawkEye keylogger’s settings page, where the method employed by an instance can be specified. 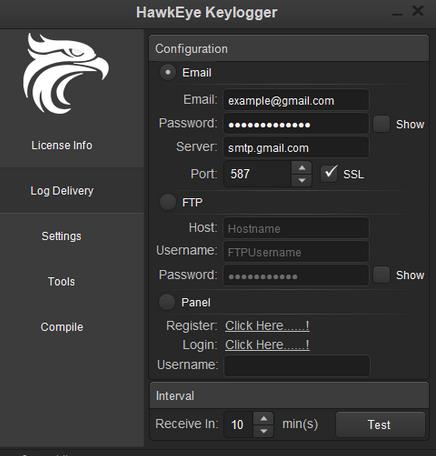 The Predator Pain and HawkEye configurations analyzed by Unit 42 over the focal time period revealed the following break-out for exfiltration method, with e-mail constituting the preferred method across a number of malicious actors: Prevention is the best strategy when it comes to the threat posed by keyloggers, such as the Predator Pain and HawkEye set. System hardening, integrity assurance, software version and patch management, and user awareness are just the first steps towards threat mitigation.

Recommendations to protection against this class of threat include:

The following are some analyses for the Predator Pain and HawkEye malware threat set that expand on associated capabilities, attributed actors, and observed campaigns: