Earlier this week Symantec released a blog post detailing a new Trojan used by the ‘Duke’ family of malware. Within this blog post, a payload containing a function named ‘forkmeiamfamous’ was mentioned. While performing some research online, Unit 42 was able to identify the following sample, which is being labeled as ‘Trojan.Win32.Seadask’ by a number of anti-virus companies.

Our analysis has turned up more technical details and indicators on the malware itself that aren’t mentioned in Symantec’s post. Here are some of our observations:

Once the UPX packer is removed from the malware sample, it becomes quickly apparent that we’re dealing with a sample compiled using PyInstaller. This program allows an individual to write a program using the Python scripting language and convert it into an executable for the Microsoft Windows, Linux, Mac OSX, Solaris, or AIX platform. The following subset of strings that were found within the UPX-unpacked binary confirms our suspicions. 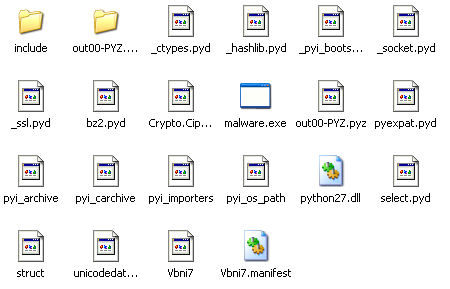 We can then use a tool such as uncompyle2 to convert the Python byte-code into the original source code. Once this process is completed, we quickly realize that the underlying Python code has been obfuscated. Tracing through the obfuscated code, we identify an ‘exec(ZxkBDKLakV)’ statement, which will presumably execute some Python code. Tracing further, we discover that this string is generated via appending a number of strings to the ‘ZxkBDKLakV’ variable. Finally, we find that after this string is created, it is base64-decoded and subsequently decompressed using the ZLIB library. The following simple Python code can be used to circumvent this layer of obfuscation:

The remaining Python code still appears to be obfuscated, however, overall functionality can be identified.

As we can see below, almost all variable names and class names have been obfuscated using long unique strings.

Using a little brainpower and search/replace, we can begin identifying and renaming functionality within the malware. A cleaned up copy of this code can be found on GitHub. One of the first things we notice is a large blob of base64-encoded data, which is additionally decompressed using ZLIB. Once we decode and decompress this data, we are rewarded with a JSON object containing configuration data for this malware:

This configuration object provides a number of clues and indicators about the malware itself. After this data is identified, we begin tracing execution of the malware from the beginning. When the malware is initially run, it will determine on which operating system it is running. Should it be running on a non-Windows system, we see a call to the infamous ‘forkmeiamfamous’ method. This method is responsible for configuring a number of Unix-specific settings, and forking the process. Continuing along, we discover that this malware has the ability to persist using one of the following techniques:

The malware copies itself to a file name referenced in the JSON configuration.

After the malware installs itself, it begins making network requests. All network communications are performed over HTTP for this particular sample; however, it appears to support HTTPS as well. When the malware makes the initial outbound connection, a specific Cookie value is used.

In actuality, this Cookie value contains encrypted data. The base64-encoded data is parsed from the Cookie value (padding is added as necessary).

The resulting decoded data is shown below.

The underlying data has the following characteristics.

XORing the first single character against the second character identifies the length of the random string. Using the above example, we get the following.

Finally, the encrypted data is encrypted using the RC4 algorithm. The key is generated by concatenating the previously used random string with the new one, and taking the SHA1 hash of this data.

This same key is used to decrypt any response data provided by the server. The server attempts to mimic a HTML page and provides base64-encoded data within the response, as shown below. 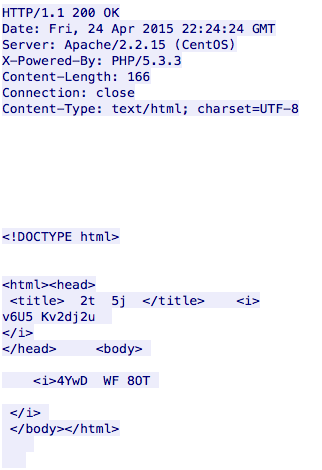 Data found within tags in the HTML response is joined together and the white space is removed. This data is then base64-decoded with additional characters (‘-_’) prior to being decrypted via RC4 using the previously discussed key. After decryption occurs, the previous random string used in key generation is updated with the random string. In doing so, the attackers have ensured that no individual HTTP session can be decrypted without seeing the previous session. If the decrypted data does not produce proper JSON data, Seaduke will discard it and enter a sleep cycle.

Otherwise, this JSON data will be parsed for commands. The following commands have been identified in Seaduke.

In order for the ‘self_exit’ or ‘seppuku’ commands to properly execute, the attackers must supply a secondary argument of ‘YESIAMSURE’.

Overall, Seaduke is quite sophisticated. While written in Python, the malware employs a number of interesting techniques for encrypting data over the network and persisting on the victim machine. WildFire customers are protected against this threat. Additionally, Palo Alto Networks properly categorizes the URL used by Seaduke as malicious.