Summary
Unit 42 has discovered a new malware family we’ve named “Reaver” with ties to attackers who use SunOrcal malware. SunOrcal activity has been documented to at least 2013, and based on metadata surrounding some of the C2s, may have been active as early as 2010. The new family appears to have been in the wild since late 2016 and to date we have only identified 10 unique samples, indicating it may be sparingly used. Reaver is also somewhat unique in the fact that its final payload is in the form of a Control panel item, or CPL file. To date, only 0.006% of all malware seen by Palo Alto Networks employs this technique, indicating that it is in fact fairly rare.
While we don’t have information on the intended targets in this case, previous reports on this activity have identified targeting primarily among the “Five Poisons” which are movements the Chinese government perceives as dangerous. They are:

The attackers used both families concurrently from late last year through November 2017 and there is some C2 infrastructure overlap between the two families, as well as links to historical reporting.  We explore those ties and provide an in-depth analysis of the new malware below.

Reaver Malware Analysis
To date, Palo Alto Networks Unit 42 has identified 10 unique samples and three distinct variants of a new malware family we have named “Reaver”. As such, we identify each variant as Reaver.v1, Reaver.v2, and Reaver.v3.
Reaver.v1 has been observed delivering a payload that uses HTTP for network communication, while versions 2 and 3 use a payload that uses raw TCP connections for this communication.
The flow for Reaver is as shown: 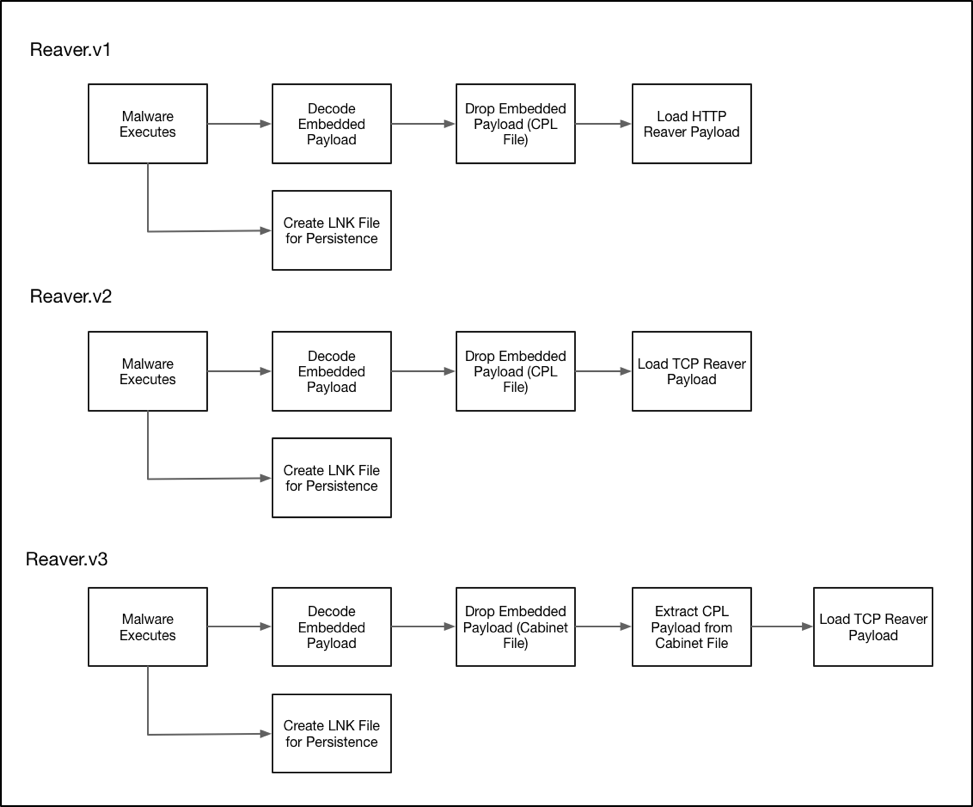 Reaver.v1
The earliest variant of Reaver begins by attempting to enable the SeDebugPrivilege privilege for the running process. In the event this is successful the malware will use the following path to store any dropped files:

It proceeds to load and decrypt and embedded bitmap resource file. This decrypted data is written to the following location:

Alternatively, if the privilege was unable to be obtained, Reaver.v2 will obtain the user’s startup folder by querying the following registry key:

Reaver proceeds to write a shortcut file to ‘%TEMP%\~WUpdate.lnk’. This file is then copied to a filename of ‘Windows Update.lnk’, which is placed in the startup path previously identified. This shortcut file points to the path of the previously written ‘Applet.cpl’ file. Finally, Reaver.v1 will execute the ‘~WUpdate.lnk’ file in a new process, thus loading the recently dropped malicious CPL file.

Reaver.v2
Reaver.v2 begins by attempting to enable the SeDebugPrivilege privilege for the running process. In the event this is successful, the malware will use the following path to store any dropped files:

Reaver.v2 proceeds to decrypt an embedded file using a simple XOR obfuscation routine. This file is written to the following file path:

After the file is written, it is then copied to a filename of ’winhelp.cpl’ in the directory that was initially chosen. After this file is copied, the original ‘Update.~tmp’ file is deleted. At this stage the malware will identify the correct startup path using the same technique witnessed in earlier variants.
A shortcut file is generated in the following path:

This ‘~Update.lnk’ file is then copied to a filename of ‘Windows help.lnk’, which is placed in the startup path previously identified. This shortcut file points to the path of the previously written ‘winhelp.cpl’ file. It will specifically load this CPL file via a call to the built-in Microsoft Windows ‘control.exe’ utility. Finally, Reaver.v2 will execute the ‘~Update.lnk’ file in a new process, thus loading the recently dropped malicious CPL file.

Reaver.v3
Like Reaver.v2, Reaver.v3 begins by attempting to enable the SeDebugPrivilege privilege for the running process. In the event this is successful, the malware will use the following path to store any dropped files:

This cabinet file is then extracted to the previously identified file path. The contents of this cabinet file consist of a Microsoft Control Panel item with a filename of ‘winhelp.cpl’.
Much like the previous version of Reaver, Reaver.v3 will query the necessary registry keys to determine the correct startup path to use. Again, a shortcut file is written to the %TEMP% path with a name of ‘~Update.lnk’, which is in turn copied to the identified startup path with a filename of ‘Windows help.lnk’. This shortcut file calls the built-in ‘control.exe’ utility to in turn load the previously dropped malicious CPL file of ‘winhelp.cpl’.
Finally, the malware calls the ‘winhelp.cpl’ file in a new process via the following command:

When the CPlApplet function is loaded, Reaver will initially determine if the SeDebugPrivilege privilege is able to be obtained. The malware proceeds to decrypt and embedded configuration of 128 bytes using a simple XOR routine. The following example decrypted configuration is as follows:

As we can see, the following information is present within this configuration:

Reaver continues to collect various information from the victim machine, including the following:

The malware proceeds to communicate with the remote server via HTTP GET and POST requests. Data that is sent is compressed and then base64-encoded before being included in the requests.
We have observed the following capabilities of this payload:

When the malware is initially loaded, DllEntryPoint will be called, which in turn will call a function that is responsible for decompressing a blob of data. The decompressed data consists of various key/value pairings that represent important strings used by Reaver. An example of this decompressed data can be seen below:

When the malware wishes to retrieve one of these decoded strings, it will simply call a function with an integer argument that is responsible for providing it. For example, calling this function with an argument of ‘10001’ would retrieve a string of ‘ole32.dll’.
The DllEntryPoint function proceeds to attempt to obtain the SeDebugPrivilege privilege, and also calls WSAStartup for future network activity.
When the CPlApplet function is loaded, it will begin by decompressing an embedded configuration using the same compression algorithm used previously. An example of this decompressed configuration may be seen below: 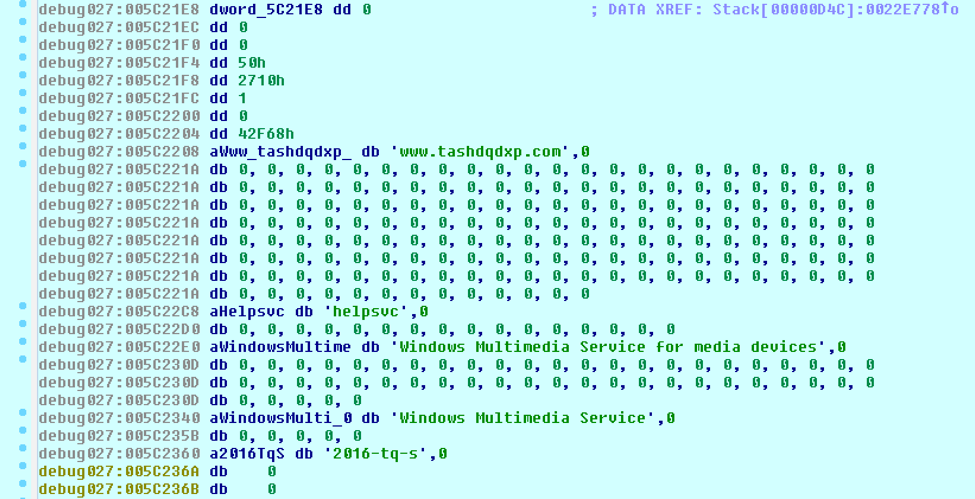 This configuration contains multiple pieces of information, including the following:

The malware proceeds to check to see if the original dropped malware file exists. In the event it does, Reaver will move this file to ‘%TEMP%\~FJIOW.tmp’ and delete this new file. This simply acts as cleanup to ensure original file artifacts no longer reside on the infected machine. Reaver will then install itself as a service in the event it is running with SeDebugPrivilege privileges.  The service is configured with a name, description, and display name that is provided within the configuration.
Reaver continues to collect various information from the victim machine, including the following:

Reaver encrypts this data using an incremental XOR key and uploads it to the configured remote server on the port specified. The following example Python code shows how this encryption takes place:

After this data is exfiltrated, the malware expects 8 bytes of data that contains two DWORDs. These DWORDs contain both a major command and a sub-command.
The following capabilities have been observed in this payload:

Ties to SunOrcal
Reaver was used concurrently with SunOrcal over the past year, to include two Reaver samples dropped from zip files hosted on a domain also being used as a SunOrcal C2 (www.fyoutside[.]com), and there is also passive DNS overlap amongst the C2s. Specifically, Reaver to date has used www.tashdqdxp[.]com for C2, which overlaps with www.weryhstui[.]com, another C2 used by SunOrcal samples during the same timeframe. Both domains have resolved to 98.126.156[.]210. Several of those same SunOrcal samples were also using www.fyoutside[.]com as an additional C2.  This led to further C2 ties within SunOrcal samples, to include samples beaconing to www.olinaodi[.]com; all of this is shown below in Figure 3. The latter has been previously reported in activity targeting Hong Kong democracy activists and that activity is in turn tied to a report targeting Tibetan, Hong Kong, and Taiwanese activists, and another blog about targeting Taiwanese activists. 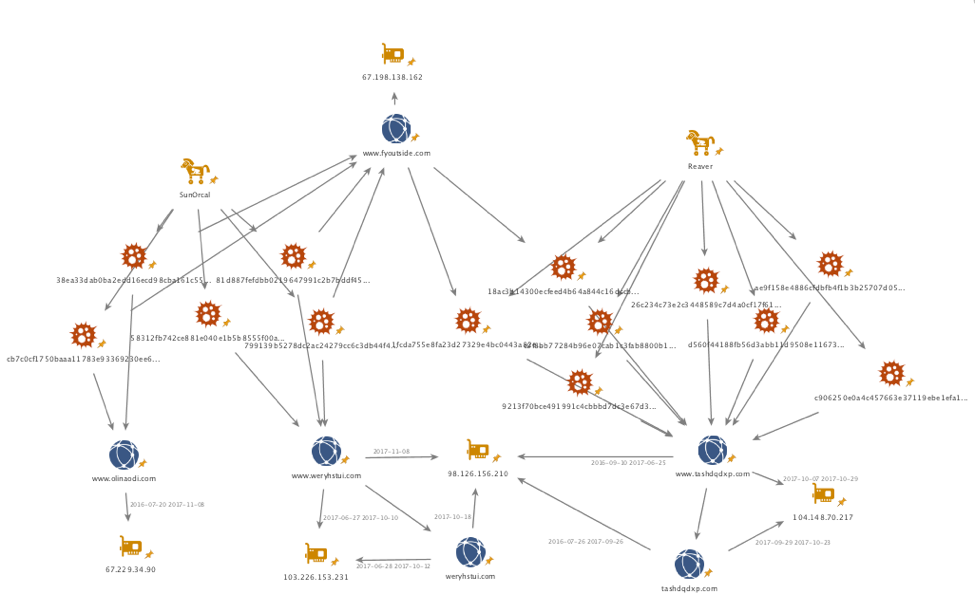 Figure 3. Chart showing overlaps between Reaver and SunOrcal. All IOCs are in the appendix at the end of this blog.

Conclusion
The attackers behind SunOrcal, whose activity dates to at least 2013 and possibly 2010, remain active and are still developing new custom malware to use against their targets. The new malware, Reaver, appears to have been in the wild since late 2016 with less than a dozen known samples, among which there are three variants. It is also unique in the fact that its final payload is in a CPL file, a technique which Palo Alto Networks has seen with only 0.006% of all malware samples we have analyzed. The attackers used both families concurrently from late last year through November 2017 and there is some C2 infrastructure overlap between the two families, as well as links to historical reporting. We will continue to monitor these attackers for new activity and report as appropriate.
Palo Alto Networks customers are protected by the following: