Summary
In the past few months, Unit 42 has observed the Patchwork group, alternatively known as Dropping Elephant and Monsoon, conducting campaigns against targets located in the Indian subcontinent. Patchwork threat actors utilized a pair of EPS exploits rolled into legitimate, albeit malicious, documents in order to propagate their updated BADNEWS payload. The use of weaponized legitimate documents is a longstanding operational standard of this group.
The malicious documents seen in recent activity refer to a number of topics, including recent military promotions within the Pakistan Army, information related to the Pakistan Atomic Energy Commission, as well as Pakistan’s Ministry of the Interior.
The BADNEWS malware payload, which these malicious documents ultimately deliver, has been updated since the last public report in December 2017. BADNEWS acts as a backdoor for the attackers, providing them with full control over the victim machine. It has historically leveraged legitimate third-party websites to host the malware’s command and control (C2) information, acting as “dead drops”. After the C2 information has been collected, BADNEWS leverages HTTP for communication with the remote servers.
We’ve observed modifications to how the malware obtains its (C2) server information, as well as modifications to the C2 communication. These changes to BADNEWS, as well as the use of recent EPS-based exploits, demonstrate that the group are actively updating their toolsets in efforts to stay ahead of the security community.
In this posting, we detail our findings and document these changes.

Delivery
The malicious documents that Unit 42 examined contained legitimate decoy lures as well as malicious embedded EPS files targeting the CVE-2015-2545 and CVE-2017-0261 vulnerabilities. These vulnerabilities are well covered in previous public works, which can be found from PWC and FireEye. Older documents used by Patchwork focused on the CVE-2017-0261 vulnerability, however in late January 2018 when, paradoxically, newer documents abandoned this vulnerability to attack the older CVE-2015-2545 vulnerability.
The lures are primarily documents of interest to Pakistani nuclear organizations and the Pakistani military as can be seen in the images below: 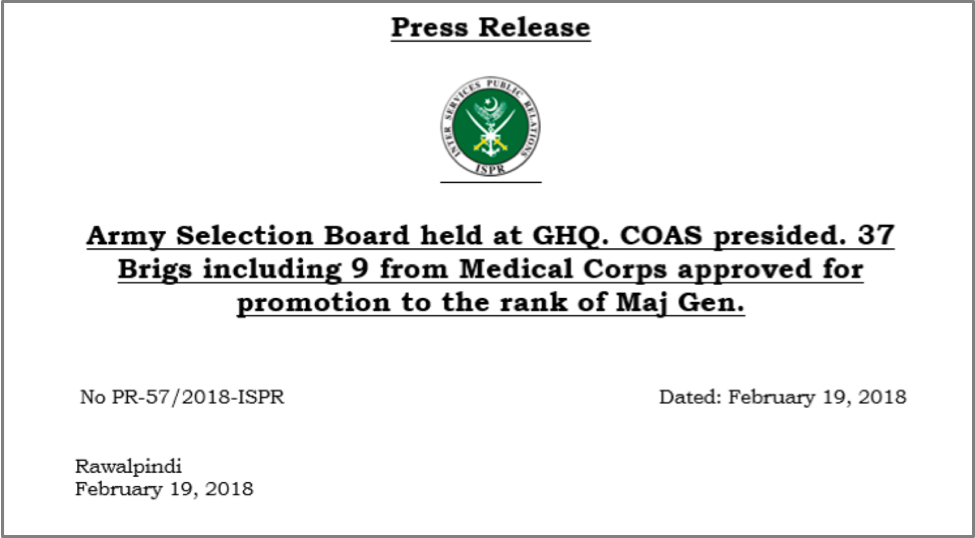 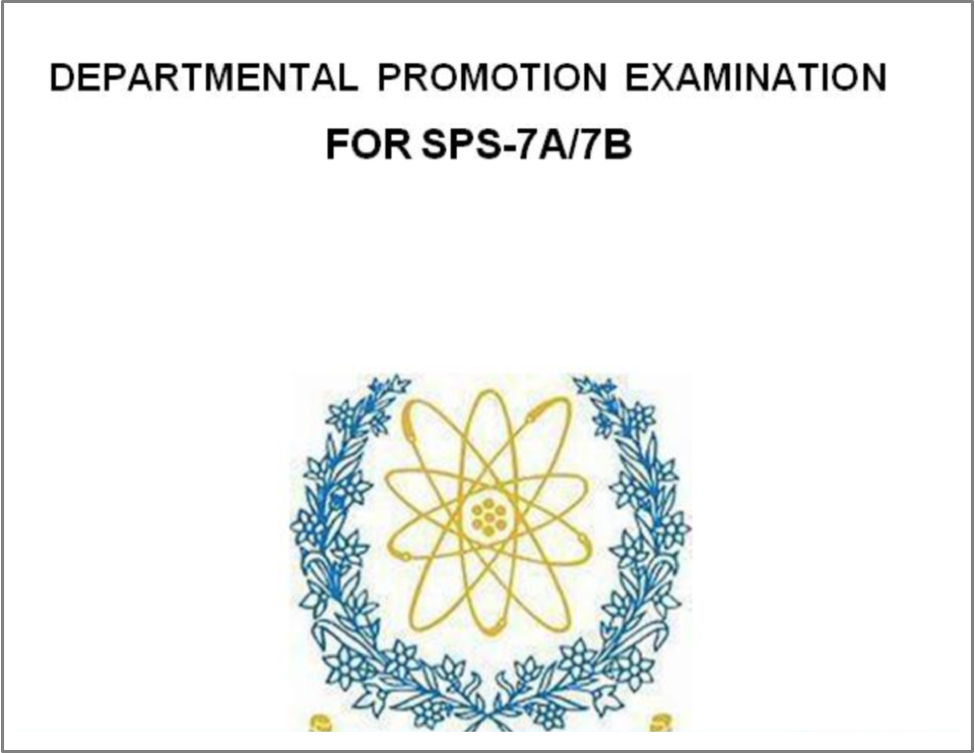 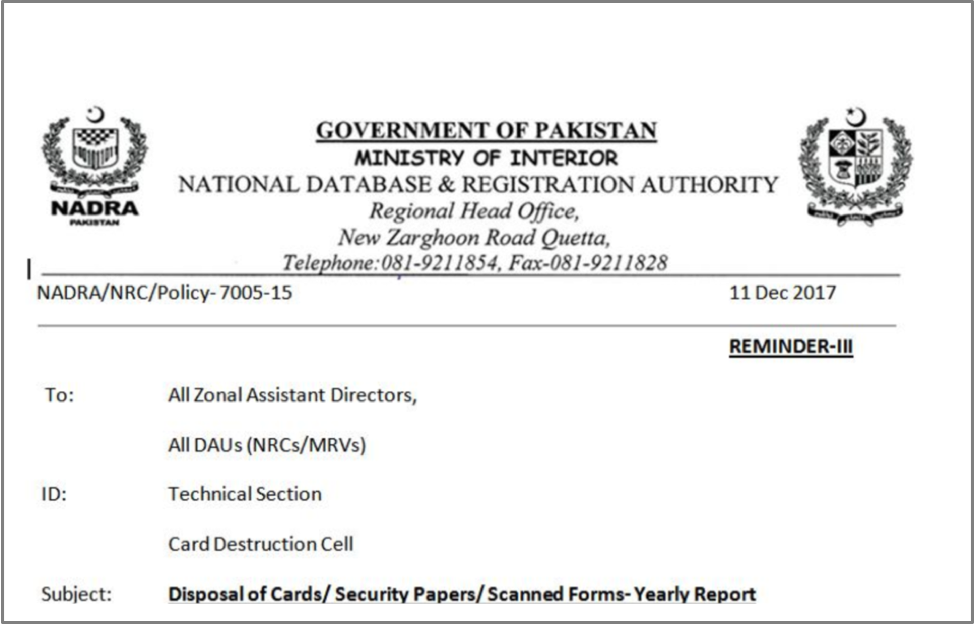 The payload from each of the malicious documents is an updated version of the BADNEWS malware family. When the shellcode embedded within the malicious EPS is executed, the following three files are dropped:

In the list of dropped files, VMwareCplLauncher.exe is a legitimate, signed VMware executable that serves to ultimately deliver the BADNEWS payload. The vmtools.dll file is a modified DLL that both ensures persistence and loads MSBuild.exe, which is the BADNEWS malware renamed to spoof a legitimate Microsoft Visual Studio tool.
After the files are dropped, the VMwareCplLauncher.exe executable is run, which in turn loads the vmtools.dll DLL file. This DLL file creates a scheduled task named BaiduUpdateTask1, which attempts to run the malicious, spoofed MSBuild.exe every subsequent minute.
The technique of having a signed, legitimate, executable load a malicious library is commonly referred to as side-loading, and has been witnessed in a number of campaigns and malware families in the past.
The flow of execution from the time the victim opens the malicious Microsoft Word document, to the execution of BADNEWS, may be seen below: 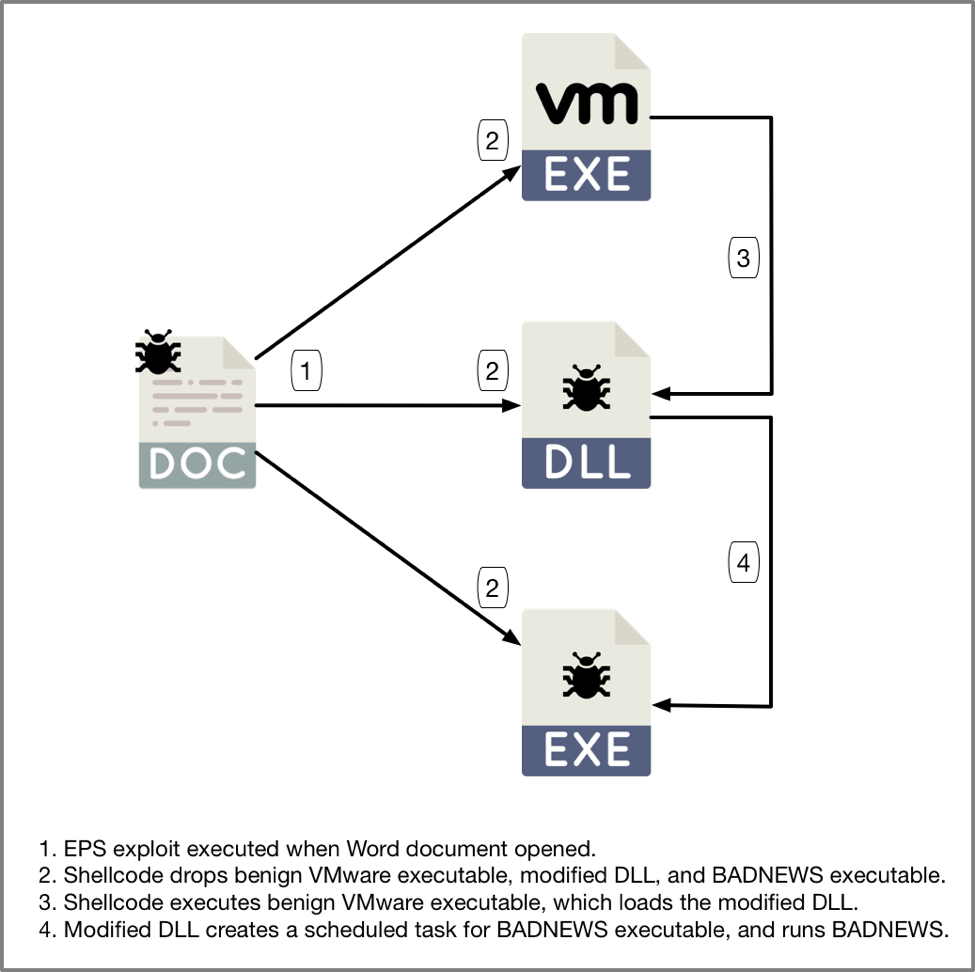 The following image demonstrates the scheduled task created by the modified vmtools.dll to ensure BADNEWS runs and remains running on the victim machine.

BADNEWS
Much of BADNEWS has remained consistent from when it was originally discussed by Forcepoint in August 2016. Additionally, recent analysis by Trend Micro notes some minor changes during 2017. To briefly recap, the BADNEWS malware family acts as a backdoor, with communication occurring over HTTP. A number of commands are provided to the attackers, including the ability to download and execute additional information, upload documents of interest, and take screenshots of the desktop.
The malware collects C2 information when it is originally executed via “Dead Drop Resolvers”. Dead drop resolvers have been used by multiple threat actor groups using various malware families and those behind Patchwork are well versed with this tactic. This tactic uses public web services to host content that contains encoded commands that are decoded by the malware.
For the remainder of the analysis in this research blog, we are discussing the following file:

One of the first modifications we witnessed in this new variant of BADNEWS is a new mutex that is created to ensure a single instance of BADNEWS is running at a given moment. This malware family used the new mutex ‘com_mycompany_apps_appname_new’.
This variant of BADNEWS uses different filenames compared to previous versions. The following filenames are used by BADNEWS throughout its execution. All of these files reside in the victim’s %TEMP% directory:

Other changes we noticed in this variant include how the malware obfuscates C2 information stored via dead drop resolvers. Previous variants of BADNEWS looked for data between ‘{{‘ and ‘}}’, and used a simple cipher to decode this data. This new variant now looks for data between ‘[[‘ and ‘]]’ in a number of hardcoded URLs. This can be seen in the following images taken from hxxp:// feeds.rapidfeeds[.]com/88604/, which is one of the dead drop resolvers we encountered in this sample:

In order to decrypt this data, the authors have included additional steps from previous versions. To decode this information, BADNEWS takes the following steps:

A script, which is included in the Appendix, will decrypt data from these dead drop resolvers. In the example shown above, we are presented with a result of 185.203.118[.]115 after all four steps are taken.
BADNEWS performs many of the expected functions associated with previous versions including keylogging and identifying files of interest. Unlike a previously reported variant, this version of BADNEWS no longer looks at USB drives for interesting files. Instead, it looks at fixed drives only. It continues to seek out files with the following extensions:

In order to prepare for C2 communication, BADNEWS will aggregate various victim information, which is appended to two strings. These strings have the following format:

An example of the first string may be seen below:

It should be noted that the variables used for this string are different from previous versions. For example, in the previous variant of BADNEWS, the victim’s unique identifier was stored under a variable named ‘uid’, the username was stored in a variable named ‘u’, etc. Additionally, the hardcoded version string of ‘1.0’ is different from previous samples.
C2 communication is also updated from prior versions, with the following commands now supported by BADNEWS:

During C2 communications, BADNEWS will communicate to the C2 previously identified via HTTP. The following hardcoded URI is used for normal communication with the C2 (note the additional forward slashes):

In the event data is uploaded to the attacker, the following hardcoded URI is used (note the use of backslashes):

When initial pings are sent to the remote server, BADNEWS includes one of the two previously created strings containing the victim’s information. An example request in a sandboxed environment may be seen below:

Figure 8 Example request made by BADNEWS

To decrypt the data provided in the POST request, a number of steps are required. First, the attackers include a series of extra ‘=’ and ‘&’ characters within the data stream. Once these are removed, the data is decoded with base64. Finally, the result is decrypted using AES-128 and the following static key (hex-encoded):

Conclusion
The Patchwork group continues to plague victims located within the Indian subcontinent. Through the use of relatively new exploits, as well as a constantly evolving malware toolset, they aim to compromise prominent organizations and individuals to further their goals. Recent activity has shown a number of lures related to the Pakistan Army, the Pakistan Atomic Energy Commission, as well as the Ministry of the Interior.
One of the malware families tied to this group, BADNEWS, continues to be updated both in how it uses dead drop resolvers, as well as how it communicates with a remote C2 server.
Palo Alto Networks customers are protected against this threat in a number of ways:

Additionally, the providers being used for dead drops have been notified.