In February 2017, we observed an evolution of the “Infy” malware that we're calling "Foudre" ("lightning", in French). The actors appear to have learned from our previous takedown and sinkholing of their Command and Control (C2) infrastructure – Foudre incorporates new anti-takeover techniques in an attempt to avoid their C2 domains being sinkholed as we did in 2016.

We documented our original research into the decade-old campaign using the Infy malware in May 2016. A month after publishing that research, we detailed our takeover and sinkholing of the actor’s C2 servers. In July 2016, at Blackhat U.S., Claudio Guarnieri & Collin Anderson presented evidence that a subset of the C2 domains redirecting to our sinkhole were blocked by DNS tampering and HTTP filtering by the Telecommunication Company of Iran (AS12880), preventing Iran-domestic access to our sinkhole.

Below, we document these changes to the malware, and highlight some ongoing mistakes and how we leveraged them to learn more about this campaign. 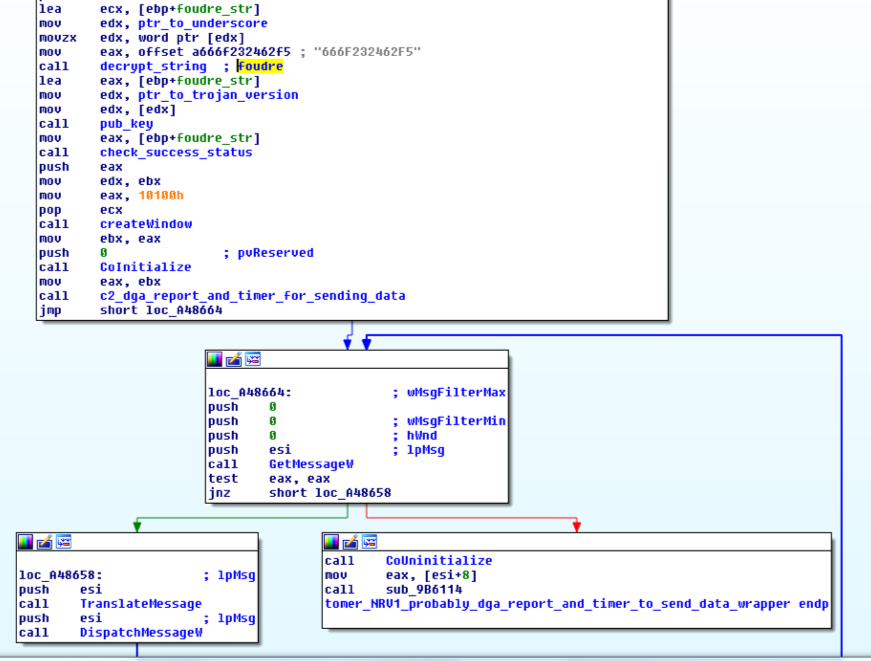 The logic and structure of Foudre is very similar to the original Infy malware. Most of the code remains the original Delphi programming, with an additional crypto library, and a new de-obfuscation algorithm.

Foudre is, like its Infy predecessors, an information stealer. It includes a keylogger, and captures clipboard contents on a ten-second cycle. It collates system information including process list, installed antivirus, cookies, and other browser data.

The malware checks for internet connectivity simply by looking for an “HTTP 200” response to a connection to google.com. It includes the ability to check for and download any updates to itself.

This “improved Infy” determines the C2 domain name using a Domain Generation Algorithm (DGA). It then validates that the C2 domain is authentic. The C2 returns a signature file, which the malware decrypts and compares it with a locally-stored validation file.

Once the validity of the C2 is confirmed, stolen data is exfiltrated with a simple HTTP POST.

The initial infection vector is a classic spear-phishing email, including a self-executable attachment. When clicked, this executable installs an executable loader, a malware DLL, and a decoy readme file (very typical of Infy).

The loader writes itself to autostart in the registry. The DLL is loaded by rundll32.exe only after restarting, when the “lp.ini” file in the same folder contains a numeric value.

Foudre uses a similar mechanism as Infy to check if the computer is already infected. It checks for the existence of a specific window “foudre<trojan version number>” with window class “TNRRDPKE”.

The final version of the original Infy malware that we observed was 31. We have so far observed Foudre versions 1 and 2 (Figure 2).

“She is supposed to provide information about Zschaepe's behavior in the investigative detention period, which should also be of interest for the victims' attorneys.”.

Beate Zschäpe is a German right-wing extremist and an alleged member of the Neo-Nazi terror group National Socialist Underground (NSU).

The text appears to be copied verbatim from the caption to the first photograph in this news article from February 2017: http://www.sueddeutsche.de/politik/nsu-prozess-zschaepes-verteidiger-will-jva-beamtin-als-zeugin-hoeren-1.3379516 (Figure 4). 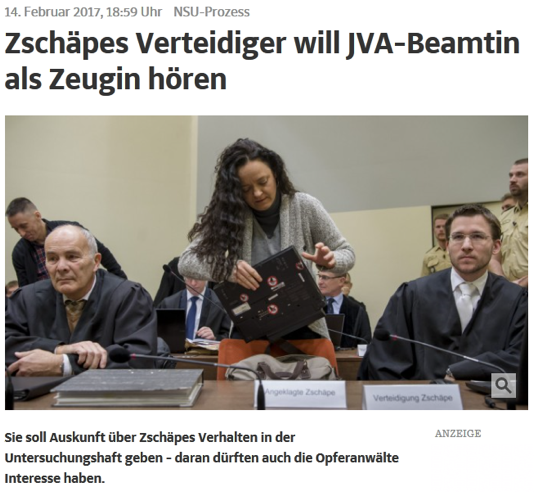 We saw similar embedded-text snippets in Infy samples, in German, Dutch, and English. It is unclear what the function of this embedded text is. 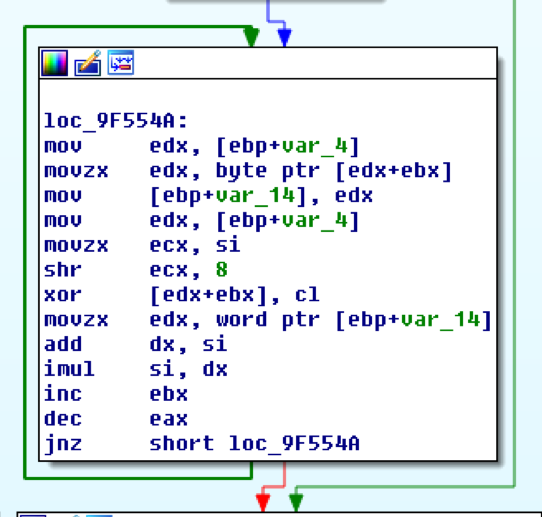 This IDA Python script adds comments to IDA with all clear text strings:

Learning from our takedown of the actor’s previous C2 infrastructure, this version implements two new C2 mechanisms in an attempt to avoid C2 takeover.

They are now using DGA for C2 domains. They have also implemented an RSA signature verifying algorithm to check the veracity of a C2 domain.

The domain name is calculated using this algorithm:

(Thanks to Palo Alto Networks researcher Esmid idrizovic for reversing this). The following script can be used to generate domain names using this algorithm: 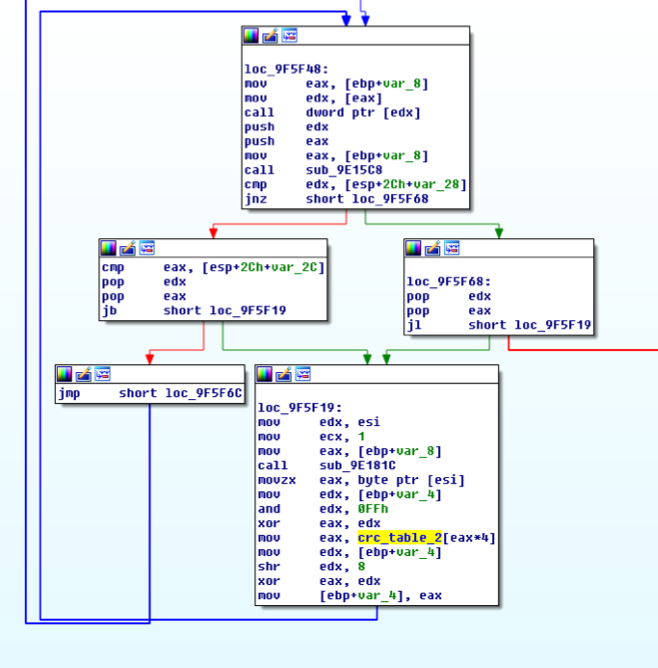 The DNS RNAME is henry55.iname[.]com, though we were not able to find any other reference to this email address outside of the context of this campaign.

Foudre uses the lockbox3 Delphi library to verify the C2: 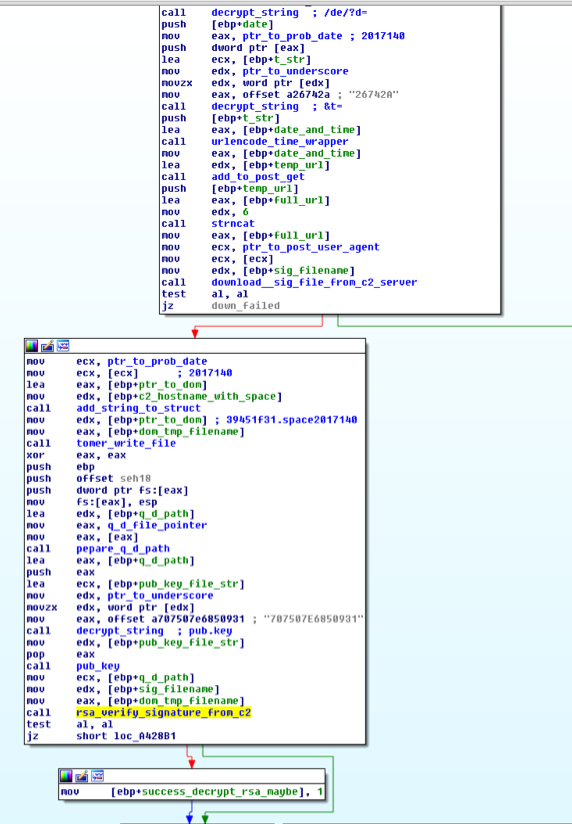 After the domain is verified, it checks if a new trojan update version is needed with these posts:

The malware then performs a second RSA signature verification using the public key. If the verification is successful, the new trojan version (gtsdch32.tmp) is executed with this command line:

One of the update parameters (download and execute) contains references indicating that there is also a 64bit version of Foudre.

We also found that the request <C2>/f/?d=<filename> is redirected to <C2>/f/<filename>.tmp. This parameter is not supported by the agent, so it is likely a server-side redirection used by the update mechanism.

The malware then encrypts the keylogger data and system information, and sends to the C2 with this post:

We forecast one of the DGA domain names and registered it before the adversary.

The victims attempted to connect to a C2 on that domain, but without the RSA private key we could not verify our domain to them. However, we are able to map the victim locations using GeoIP (Figure 8).

We note a preponderance of Iranian-domestic victims, very reminiscent of the Infy campaigns. Efforts against the United States and Iraq are also familiar. And once again, the very small number of targets hints at a non-financial motivation.

One of the Iraq victims uses an IP in the same class C network as one of an observed Infy victim, suggesting that the adversary is targeting the same specific organization, or even computer. 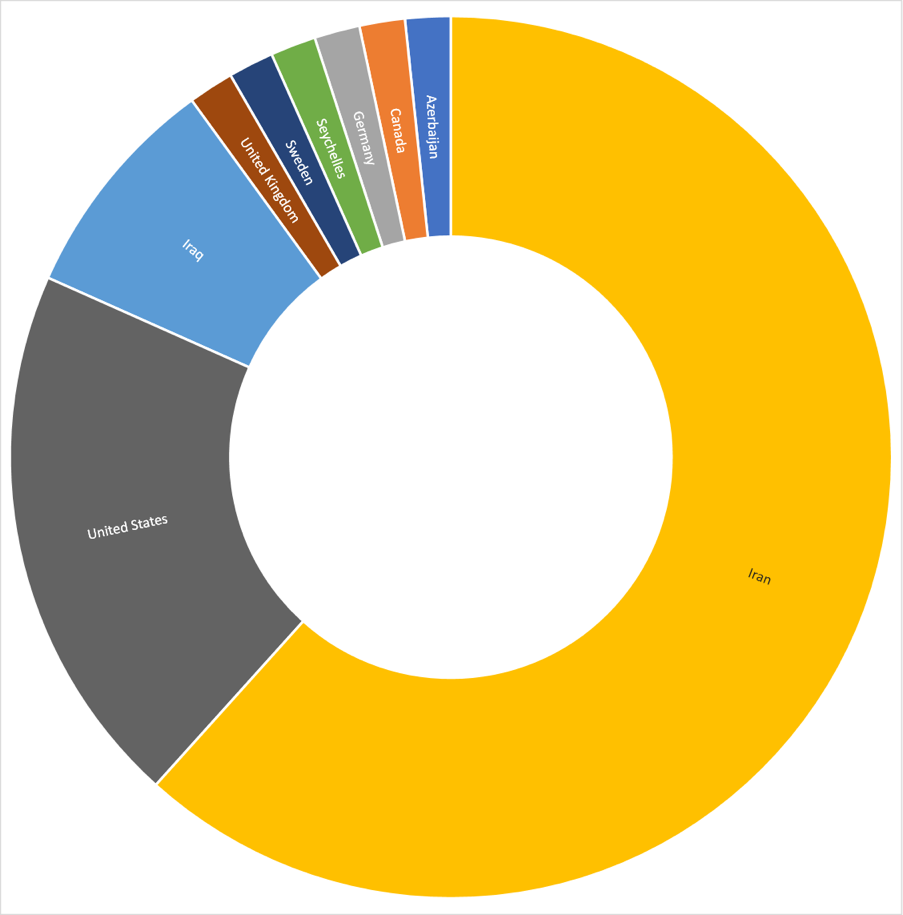 Although without the RSA private key, we were unable to establish communications with any victims, we discovered that by sending an invalid signature file to the victim, owing to a lack of input validation of the signature file content/size, we can crash the rundll32 process running the Foudre malicious DLL, disabling the infection until the victim reboots.

Regarding the actions by the Telecommunication Company of Iran to prevent the C2s from resolving to our sinkhole,  Guarnieri & Anderson note “The filtering policy indicates that Iranian authorities had specifically intervened to block access to the command and control domains of a state ­aligned intrusion campaign at a country level”.

We shouldn’t be surprised then to see Infy return – fundamentally the same malware, targeting the same victims.

The actors understand that they needed a more robust C2 infrastructure to prevent infiltration and takedown. DGA adds some resilience, but is not impervious to takeover.

However, using digital signing is an effective C2 defense mechanism. Without access to the private keys, it’s not possible to impersonate a C2 even if a DGA domain is registered by a researcher. It’s possible that the private keys are held locally on the C2 server, but without access to the C2 we can’t confirm this particular potential vulnerability in their infrastructure.

Prince of Persia is persistent, indeed.

AutoFocus users can view malware related to this attack using the “Foudre” tag.

As of time of publishing, the actor had registered DGA domains corresponding to dates through end-July 2017. Although the DGA algorithm allows the Top-Level Domains (TLDs) of “.space”, ”.net” and “.top”, we note predominantly “.space” domain registrations, just one “.top”, and no “.net”. Of special interest is multiple “.site” domains resolving to the C2 IP address. We suspect that this may be different malware – possibly, as we saw with the previous Prince of Persia investigations, an as-yet unidentified more full-featured Infy/Foudre variant.

Note that we identified several other IP addresses historically related to some of these domains, but research concludes that these are registrar-default hosts rather than C2 servers.