By Mike Harbison and Simon Conant

While looking at commodity RATs currently offered on underground forums, we came across “WebMonitor”, on the market since mid-2017. We noticed that while detection was high for most anti-virus vendors, all tagged it with only generic detection. At this point we realized that although this malware had been around for almost a year, we were looking at a hitherto-undocumented commodity RAT.

For Sale
Commodity RATs are typically peddled on underground forums and come and go with new offerings springing up to replace those taken down by law enforcement actions. 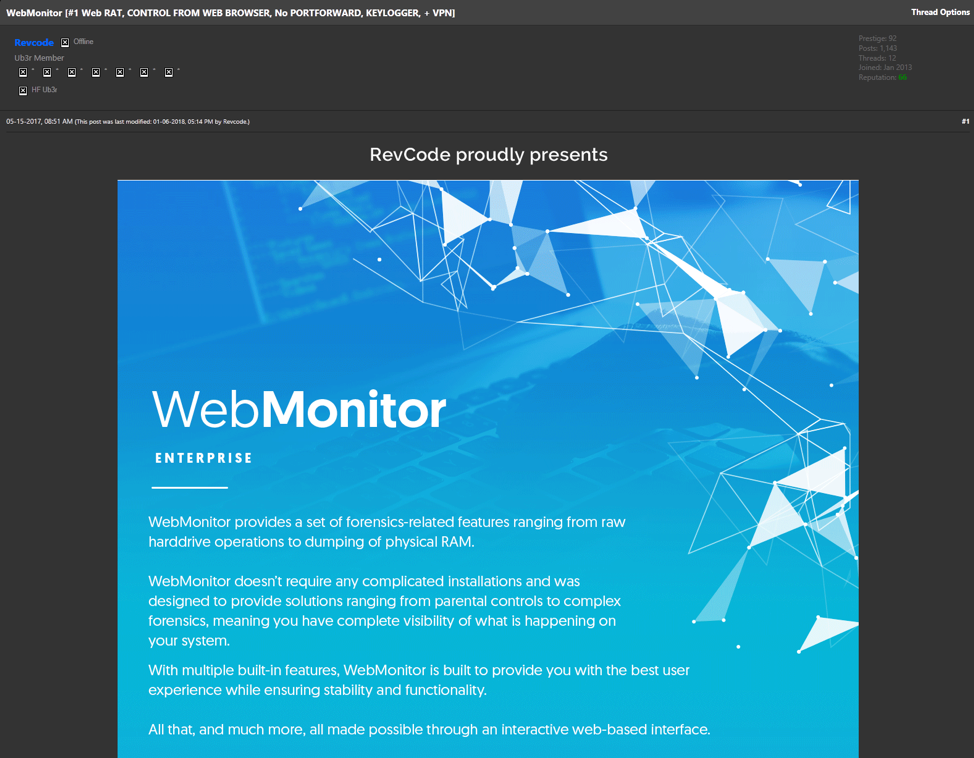 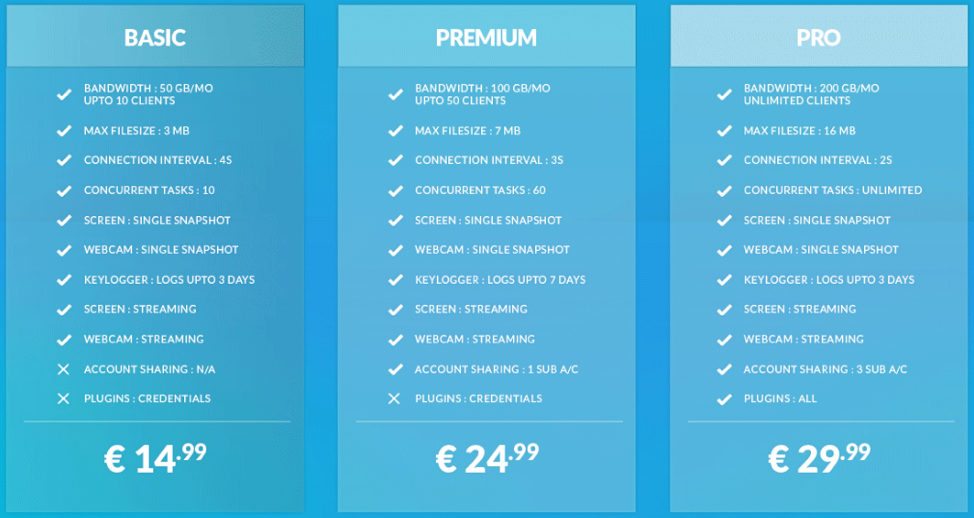 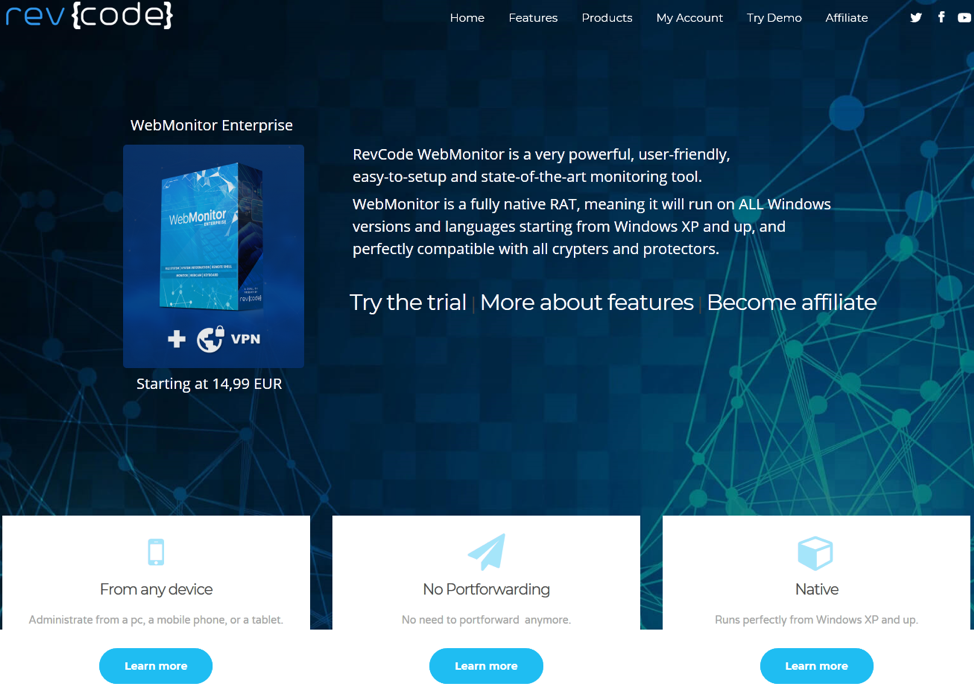 Features
On the server-side, WebMonitor offers an included VPN and C2 service (discussed in detail later in this report), with a web-based interface (Figure 4). 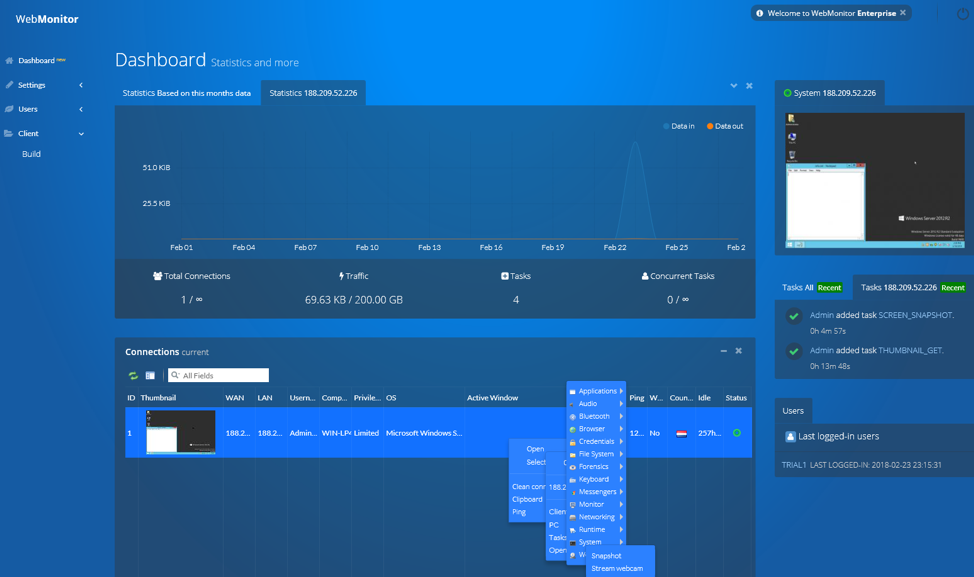 WebMonitor offers two interface options: the original “Lite” version, and a slicker interface in the “Enterprise” version.
A list of features is provided at the site, some of which stretch the guise of a legitimate administration tool:

The WebMonitor client (ie: the RAT) is written in Visual Basic 6 (VB6) and packed with UPX.
It installs to users\%USERNAME%\AppData\Roaming\REVCODE-***.EXE,
where **** is a random 4-digit hex value.
For persistence it creates a registry key under
x86: HKCU\Software\Microsoft\Windows\CurrentVersion\Run
x64: HKCUU\Software\Wow6432Node\Microsoft\Windows\CurrentVersion\Run) (Figure 5), similarly appending using the same 4-digit value.

Along with the C2-as-a-Service, the client builder is designed for ease of use, with a focus on simplicity. Along with deciding whether a pop-up is displayed – or not – the customer can decide whether the client should run at startup, and if the process should restart if terminated (Figure 6).

Revcode partner (or alternative forum account) attempts to claim legitimacy “We have to follow the laws and therefore have to display installation dialogs. However, we can't help if people bypass that by cracking or patching the executable.” But then contradicts himself in fact, with the builder option to NOT create an installation pop-up, and “The reason why me made it possible in a way to bypass the dialog is when customers want to update their clients. We don't find it necessary to reproduce the installation dialogs.”.

C2aaS
As previously seen in Quaverse RAT / QRAT, WebMonitor offers Command-and-Control (C2)-as-a-Service (C2aas). Customers don’t have to (in fact, can’t) run their own C2 system, it’s provided for them. WebMonitor C2s to virtual-hostnames, apparently unique to each customer, at one of two root C2 domains. Although C2 communication is over HTTPS, an obvious downside to such a C2 domain architecture is that the C2 traffic is easily detected and blocked based upon the domains.
WebMonitor customers access their C2 web interface via user-specific virtual hostnames at the host C2s (Figure 7). 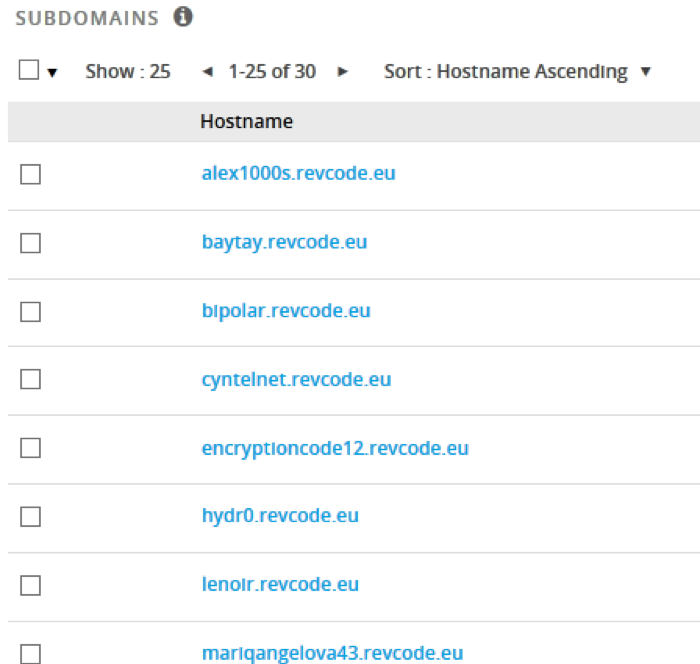 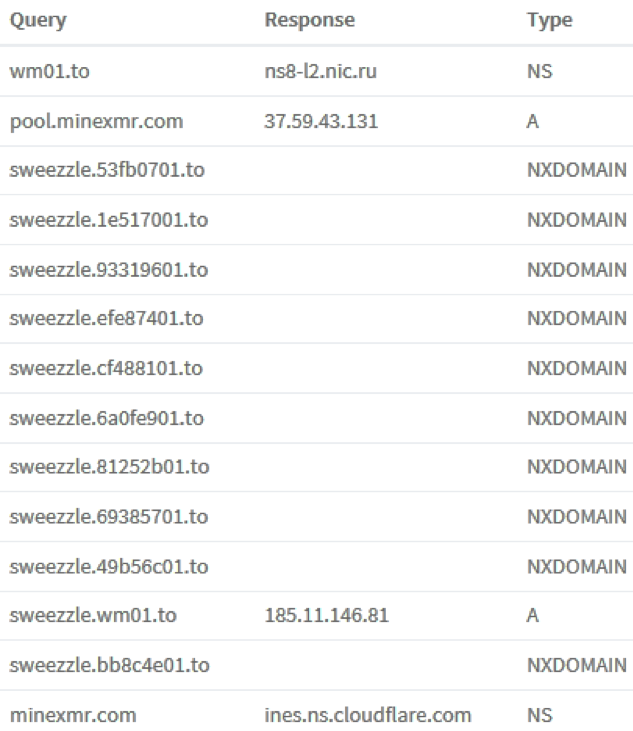 These take the form <username>.<8_char_hex_value>.to. No domains in any observed samples using this technique actually exist, and as such the DNS “NXD” (non-existent domain) response has no obvious C2 function.
It is possible that this is may be a yet-to-be-implemented Domain Generation Algorithm (DGA) implementation, otherwise possibly a clumsy and ineffectual effort to attempt to camouflage the genuine C2 DNS lookup among invalid ones.
One of the very first samples observed using this new technique also contacted a Monero Mining Pool server pool1.minexmr[.]com, as seen in Figure 8 above. This may have been the author testing rather than a feature released to his customers, as we only observed this once in the wild. Monero mining is hardly representative of a feature of a “legitimate remote administration utility”.

RAT Customers and Targets
Revcode[.]eu is observed being used less often in recent months, in favor of wm01[.]to, with some samples contacting both. At time of writing, we understand those to be the only two domains used by WebMonitor’s C2-as-a-Service. Based upon analysis of passive DNS records, we observed just under 100 virtual hosts under the two domains, giving an indication of the relatively small number of customers. To date Palo Alto Networks has collected just over 500 distinct samples of WebMonitor.

The apparently-small number of customers and the “commodity” nature of this malware, with a modest price tag, might suggest an innocuous threat. However, using AutoFocus, we have observed over 2000 WebMonitor infection attempts against Palo Alto Networks customers across multiple verticals (Figure 9), worldwide (Figure 10). 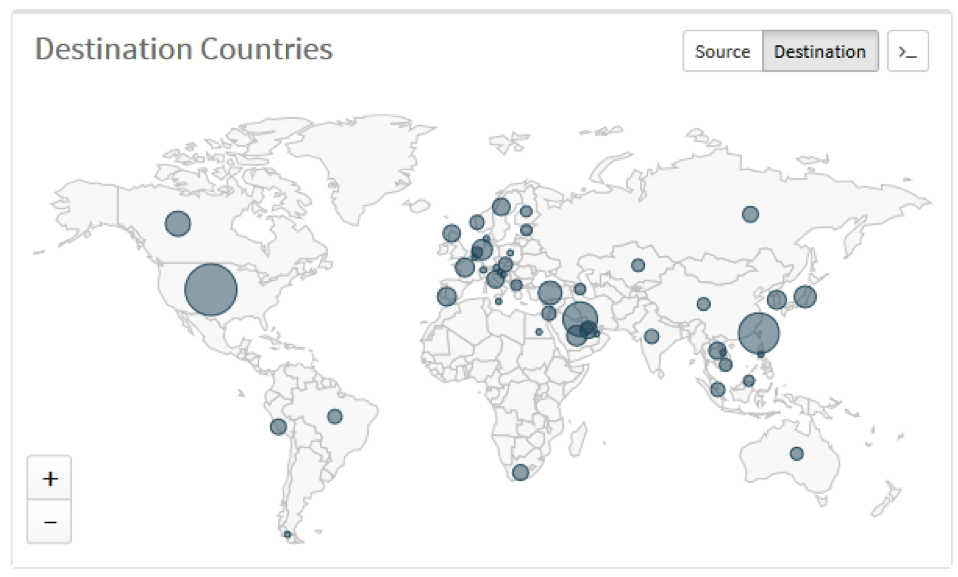 Author
The domain revcode[.]eu has an in-the-clear, non-anonymized WHOIS (Figure 11). Several current and historical domains are registered with identical information, some back to 2013. Research into the information in the WHOIS found corroborating information, identifying a 25-year-old from the state of Bavaria in southern Germany. 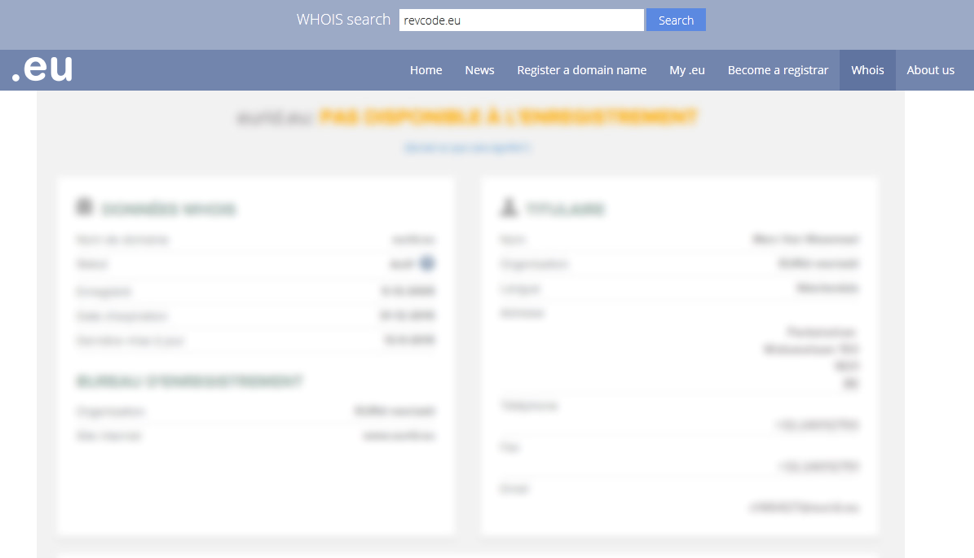 Interestingly, while WebMonitor has been marketed since May 2017, there has been no other formal analysis and write-up in the year that it has been sold. The tongue-in-cheek, Florida-based blogger “Krabs on Security” offers an analysis, but this hasn’t been picked up by mainstream malware researchers. She opines “a very very legal malware backed by a .eu domain and a very very long Term of Service that was used in CEO Fraud, as seen below. Who would’ve thought such legal software being advertised on the benign forums dubbed “HackForums” would be used for such notorious cybercriminal purposes?”. “Revcode” partner “SoftPatch” seemed slighted and was quick to attack this analysis, pointing out in a forum post (Figure 12) multiple apparent inaccuracies. 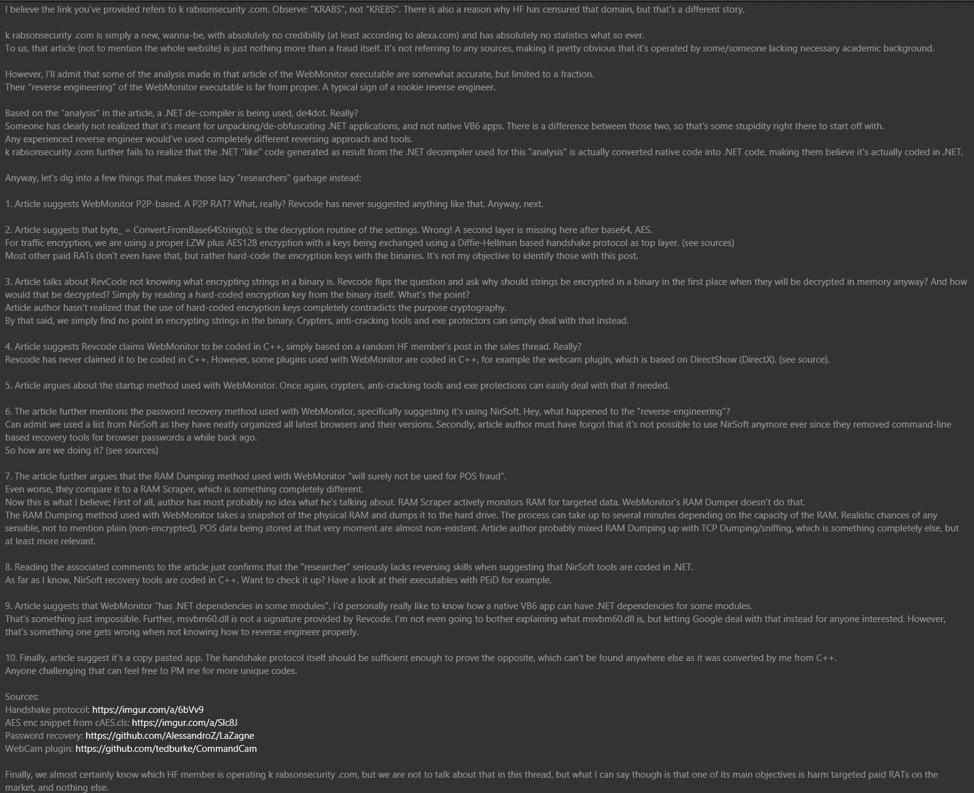 And Revcode himself, despite the usual attempts at pretense-of-legitimacy seen in Commodity RAT sales, markets features that have no utility for legitimate use: “perfectly compatible with all crypters and protectors”, “Privacy is our priority, so no logs are saved on our servers.”. Revcode partner (or alternative forum account” posts an exhaustive list of credentials that this RAT can recover “Here is a list of what kind of credentials RevCode is capable of recovering”:
Web Browsers:
* Internet Explorer 4.0 - 11.0
* Mozilla Firefox - All versions
* Google Chrome
* Safari
* Opera

Summary
The feature set of this RAT would afford an attacker significant access to and control of a victim. Fortunately, owing to the “C2aaS” model employed, detection of and prevention against WebMonitor C2 traffic is trivial. Webmonitor’s addition to the list of currently-marketed commodity RATs demonstrates their continued popularity, enabling successful attacks even in the hands of the unsophisticated attacker.
We predict that WebMonitor won’t last much longer, at least not with this model as the C2s are too easily identified/blocked. Indeed, another aspect of this centralized model, having the hosted service create each client for customers, might put the author’s hands on every one of the malware samples in the eyes of the law.

Coverage
Palo Alto Networks customers are protected from this threat in the following ways:

AutoFocus users can view WebMonitor RAT samples using the “WebMonitorRAT” tag.
IOCs can be found in the appendices of this report.