By Mike Harbison and Brittany Barbehenn

First discovered in 2013, Upatre is primarily a downloader tool responsible for delivering additional trojans onto the victim host. It is most well-known for being tied with the Dyre banking trojan, with a peak of over 250,000 Upatre infections per month delivering Dyre back in July 2015. In November 2015 however, an organization thought to be associated with the Dyre operation was raided, and subsequently the usage of Upatre delivering Dyre dropped dramatically, to less than 600 per month by January 2016.
Today, the Upatre downloader tool is effectively no longer in use by criminal organizations. However, one of the many interesting aspects of the Upatre tool had always been its constant adaptive nature where the developers continuously added features and capabilities to the tool to increase its efficacy.
In March 2018, Unit 42 researchers collected a sample of Upatre which was compiled in December 2016 but at the time was largely undetectable by most automated detection systems . Because of this, we analyzed the sample to afford awareness to those interested in this malware and its evolution. This previously undocumented variant features significant code flow obscuration, a pro re nata means of decryption for network communications, and of particular interest, the method in which this variant evades virtual machine detection.
In this post we highlight these techniques identified during our analysis.

Malware Overview
Upatre is a stage-0 malware, which basically means it’s a downloader.   The malware is used to download and install a payload onto the affected system.  The payload is retrieved from hardcoded domain(s) and is typically another piece of malware. Historically, Upatre has acted as a downloader for malware families such as Dyre, GameOver Zeus, Kegotip, Locky, and Dridex to name a few. However, in this case no payload was delivered. Additionally, variants such as this one collect information from the target and transmit the data via an HTTP POST request.
This newly observed variant comes packed with several characteristics and capabilities that stood out to us during analysis.  Attributes in the PE header suggest that the malware is written in Visual C++ and several of the PE sections have high entropy classification, which indicates that the binary is packed.  The PE resource section also contains images of Google Chrome, so when the binary is placed on the target machine, it appears to be that of the Google Chrome web browser.
One of the key features about this variant that stood out during our analysis is how it detects whether or not it is running within a virtual machine. Although virtual machine detection is anything but new, in this variant, it is handled a bit differently than other samples previously analyzed by Unit 42.  To, evade detection, the newly observed variant enumerates the running processes on the host, generates a CRC32 hash of the process name, performs an XOR with a hard-coded key of 0x0F27DC411, and finally compares the newly computed value against a list of values stored in an array within the code.  We observed the following values:

This version of Upatre will not transmit any data via HTTP POST to any of the target domains if one of these values is found.
In the event one of the values are found, the malware will sleep for six seconds and then will restart the entire check again.
We were unable to determine every corresponding process name from the CRC32 list above, however, we were able to decipher the following process names:

Other notable functionality of this new version of the Upatre malware includes:

Network Communication
Another feature of this sample is the use of top level domains (TLD) of. bit. The intended domains are encrypted and only decrypted when the malware is ready to use them. This new sample attempts to resolve two domains, bookreader[.]bit and doghunter[.]bit via the following hardcoded DNS Servers:

DNS resolution for .bit domains use hardcoded DNS servers and is handled via TCP versus traditional UDP. This is because .bit domains are based on Namecoin and aren’t regulated by ICANN. Additionally, the hardcoded DNS server IPs we identified in this sample are all associated with OpenNIC Public DNS servers.
According to OpenNIC, when using OpenNIC DNS servers .bit domains are resolved through centralized servers that generate a DNS zone from the Namecoin blockchain; therefore, the secure nature of using Namecoin as a decentralized means of DNS is not actually being utilized here.
If domain resolution is successful, the malware will then perform an HTTP POST request similar to the following:

Note, the HTTP POST does not contain any User-Agent strings.
At this time, we don’t fully understand the encryption method; however, we know that the data sent in the POST request is encrypted using a custom encryption algorithm.  Below is an example of data captured prior to encryption:

For conventional naming, the function at address 0x00137ED6 has been renamed to the Windows API  RegQueryValueEx_0.  According to MSDN this function takes six parameters, the frame pointer is ESP based and the stack frame would resemble the following:

In the above figure, Func_RegQueryValueEx_0 is EBP based and performs the following:

After the call into sub_140CBE the stack would resemble the following: 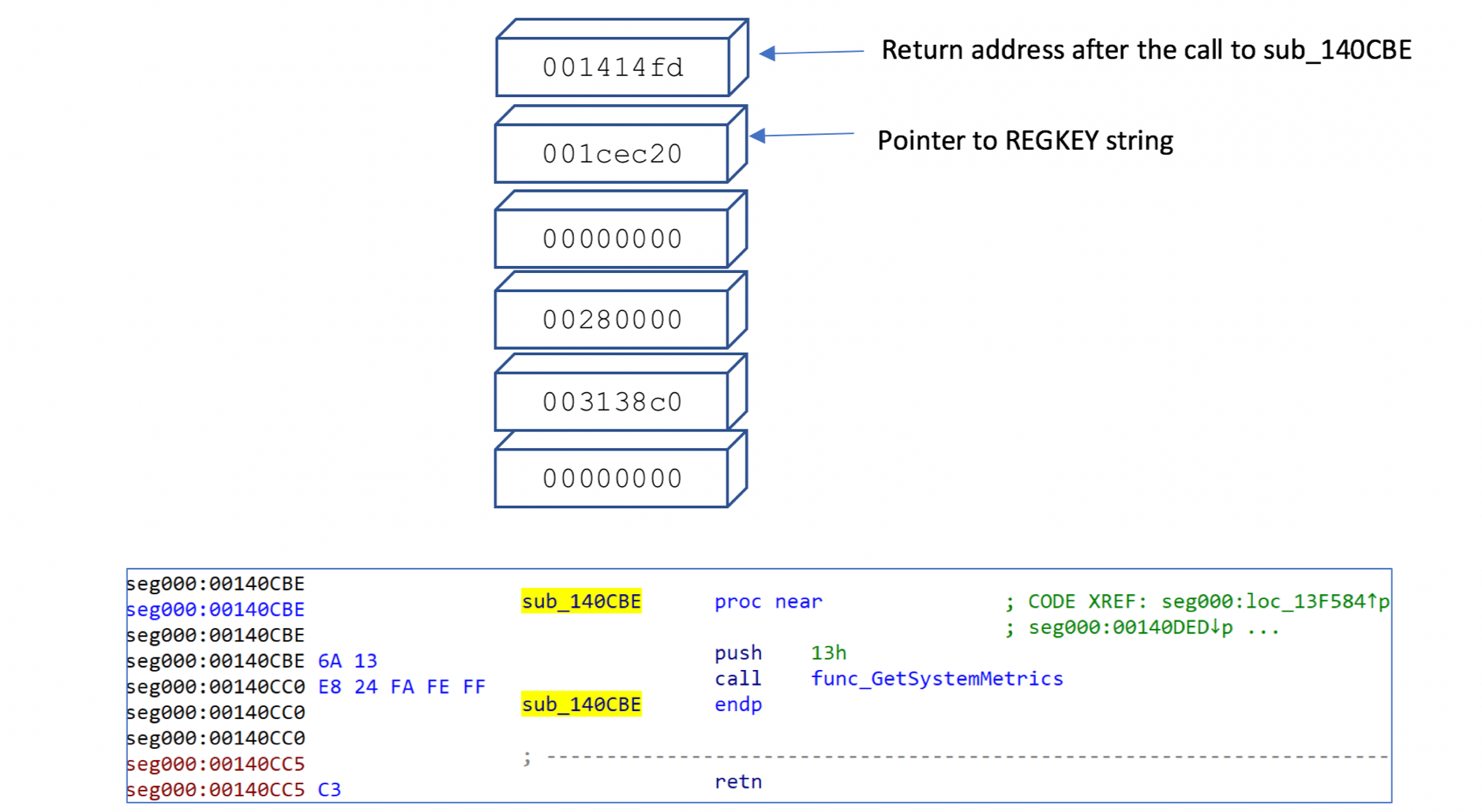 Function Sub_140CBE does the following:

0x13 is the SM_CSURSOR index used by GetSystemMetrics, which returns the width of a cursor in pixels.  Retrieving this value has no bearing on the program as the return value is not used.
How the stack looks after the call to func_GetSytemMetrics 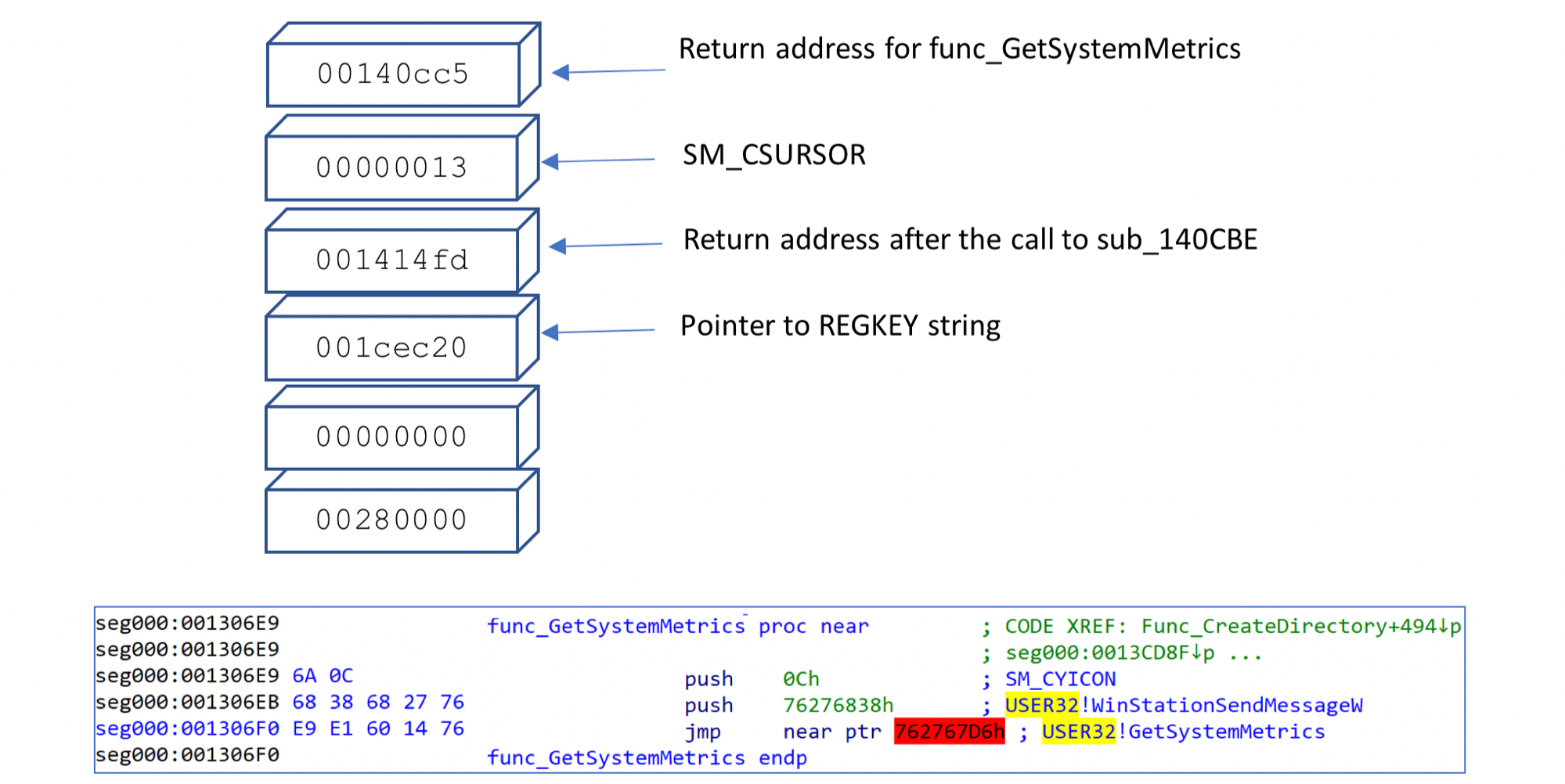 Some interesting observations about this function:

Here is how the stack looks prior to the jump:

Return address 0x001414FD is the address that is used to open and query the hosts registry, and this is the target address after executing the above instructions.  The return code flow is as follows:

This stack pivot is performed entirely to make static analysis of the file more difficult, but the end result is still that the API function executes, and the malware accomplishes its task.

File x$MSBuild.exe is then copied to the host's C:\ProgramData\MSBuild folder.

In our data, we have observed over 119,000 unique malware samples that use dot-bit (.bit) domains for C2 infrastructure as early as 2014.  Malware families observed include Necurs, GandCrab, Vobfus, Tofsee, Floxif, Ramnit, and several others.
Due to the C2 domains being down at the time of our analysis, which was unsurprising given the potential age of the sample, we were never able to capture the ultimate payload for this new Upatre variant.  However, open source analysis on this variant identified another sample configured with the same dot-bit domains.  The sample, 94a8b4b22dab4171edde5b1bafbf2f17dbe3c3c4c01335c36ba3b6e5d3635b83, was compiled six days after our Upatre sample and delivered the Chthonic banking trojan via RIG exploit kit.
Although the delivery mechanism was not observed during our analysis, Upatre typically arrives via an email link/attachment or through a compromised website.

Defending Against this Threat
The Upatre malware is constantly changing and is capable of downloading many different malware families, some, destructive.  Using threat detection and prevention solutions such as the Palo Alto Networks next-generation security platform are highly recommended as part of a proactive cyber security strategy. WildFire and Traps both detect the samples described in this report as malicious.
Not all dot-bit domains are malicious, but organizations should take steps to ensure they can control access to all potentially malicious domains. Blocking outbound access to DNS servers and re-routing DNS requests to internally controlled DNS servers can help protect a network from malware using dot-bit domains provided by the Namecoin network.
Palo Alto Networks customers remain protected from Upatre and can identify this threat using the Upatre tag in AutoFocus.

Indicators of compromise associated with this analysis include:

Updated on 7/13/2018 to clarify that the Upatre sample discussed was compiled in 2016 but is newly discovered in 2018 and to more clearly identify samples with their hashes.