When reviewing packet captures (pcaps) of suspicious activity, security professionals may need to export objects from the pcaps for a closer examination.

This tutorial covers the following areas:

The first pcap for this tutorial, extracting-objects-from-pcap-example-01.pcap, is available here. Open the pcap in Wireshark and filter on http.request as shown in Figure 1.

Figure 1. Filtering on the tutorial's first pcap in Wireshark.

We can export these objects from the HTTP object list by using the menu path: File --> Export Objects --> HTTP... Figure 2 show this menu path in Wireshark. 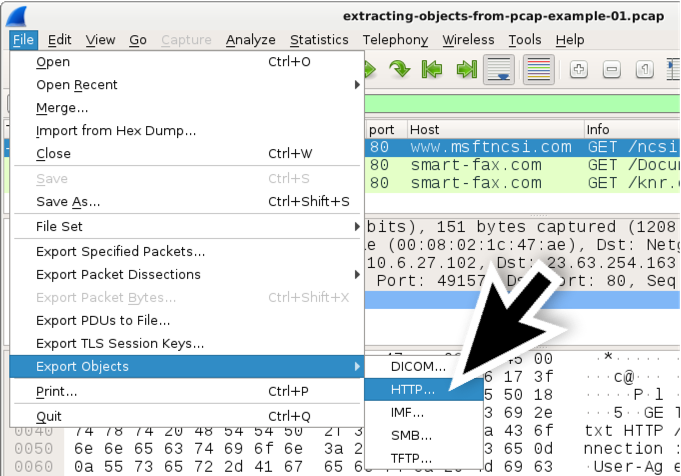 Of note, the Content Type from the HTTP object list shows how the server identified the file in its HTTP response headers. In some cases, Windows executables are intentionally labeled as a different type of file in an effort to avoid detection. Fortunately, the first pcap in this tutorial is a very straight-forward example.

Still, we should confirm these files are what we think they are. In a MacBook or Linux environment, you can use a terminal window or command line interface (CLI) for the following commands:

The file command returns the type of file. The shasum command will return the file hash, in this case the SHA256 file hash. Figure 5 shows using these commands in a CLI on a Debian-based Linux host.

Figure 5. Determining the file type and hash of our two objects exported from the pcap.

The commands and their results from Figure 5 are listed below:

The information above confirms our suspected Word document is in fact a Microsoft Word document. It also confirms the suspected Windows executable file is indeed a Windows executable. We can check the SHA256 hashes against VirusTotal to see if these files are detected as malware. We could also do a Google search on the SHA256 hashes to possibly find additional information.

In addition to Windows executable or other malware files, we can also extract web pages. Our second pcap for this tutorial, extracting-objects-from-pcap-example-02.pcap (available here) contains traffic of someone entering login credentials on a fake PayPal login page.

When reviewing network traffic from a phishing site, we might want to see what the phishing web page looks like. We can extract the initial HTML page using the Export HTTP object menu as shown in Figure 6. Then we can view it through a web browser in an isolated environment as shown in Figure 7. 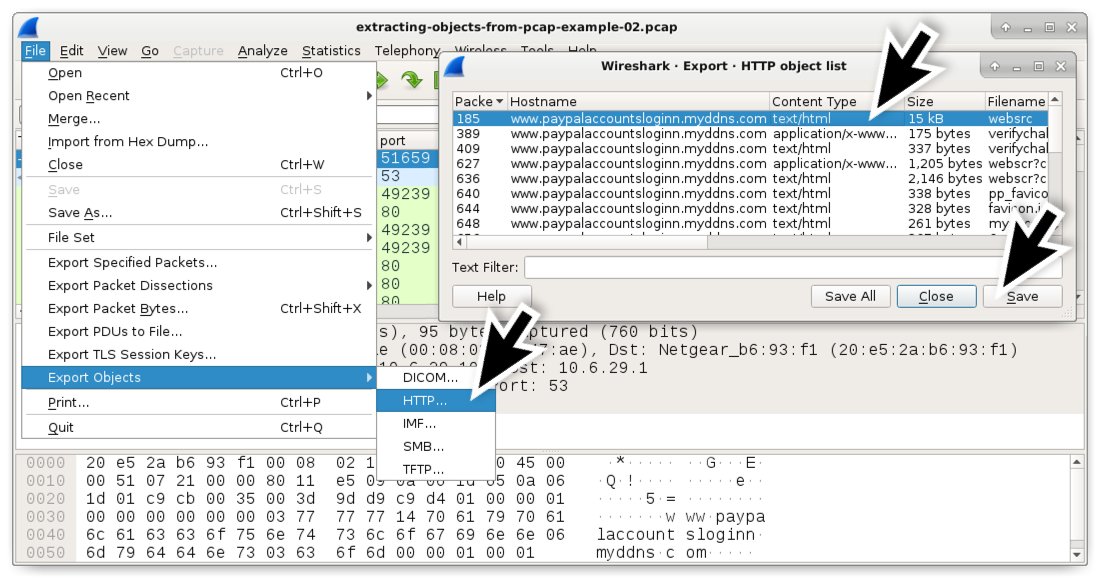 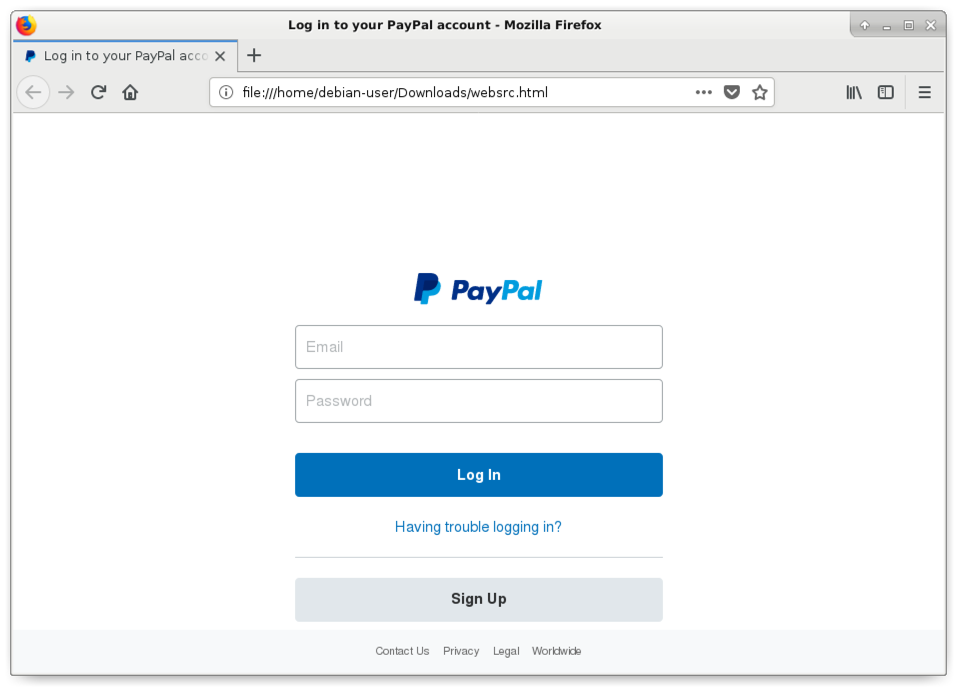 Some malware uses Microsoft's Server Message Block (SMB) protocol to spread across an Active Directory (AD)-based network. A banking Trojan known as Trickbot added a worm module as early as July 2017 that uses an exploit based on EternalBlue to spread across a network over SMB. We continue to find indications of this Trickbot worm module today.

Our next pcap represents a Trickbot infection that used SMB to spread from an infected client at 10.6.26.110 to its domain controller at 10.6.26.6. The pcap, extracting-objects-from-pcap-example-03.pcap, is available here. Open the pcap in Wireshark. Use the menu path File --> Export Objects --> SMB... as shown in Figure 8. 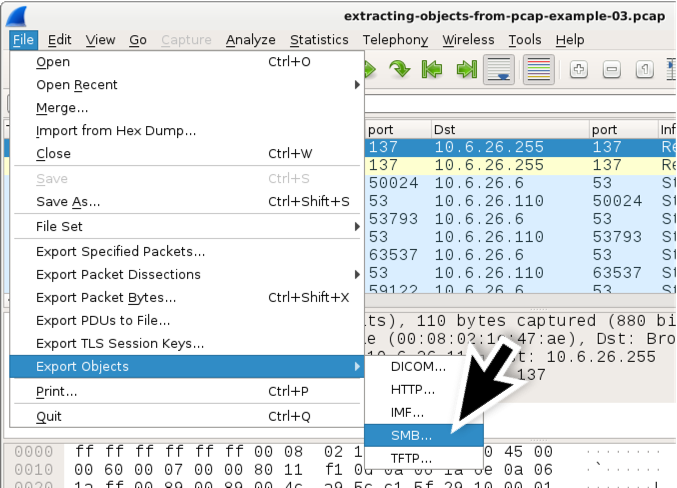 This brings up an Export SMB object list, listing SMB objects you can export from the pcap as shown below in Figure 9.

Notice the two entries near the middle of the list with \\10.6.26.6\C$ as the Hostname. A closer examination of their respective Filename fields indicates these are two Windows executable files. See Table 1 below for details.

In the Content Type column, we need [100.00%] to export a correct copy of these files. Any number less than 100 percent indicates there was some data loss in the network traffic, resulting in a corrupt or incomplete copy of the file. These Trickbot-related files from the pcap have SHA256 file hashes as shown in Table 2.

Certain types of malware are designed to turn an infected Windows host into a spambot. These spambots send hundreds of spam messages or malicious emails every minute. In some cases, the messages are sent using unencrypted SMTP, and we can export these messages from a pcap of the infection traffic.

One such example is from our next pcap, extracting-objects-from-pcap-example-04.pcap (available here). In this pcap, an infected Windows client sends sextortion spam. Open the pcap in Wireshark, filter on smtp.data.fragment, and you should see 50 examples of subject lines as shown in Figure 10. This happened in five seconds of network traffic from a single infected Windows host. 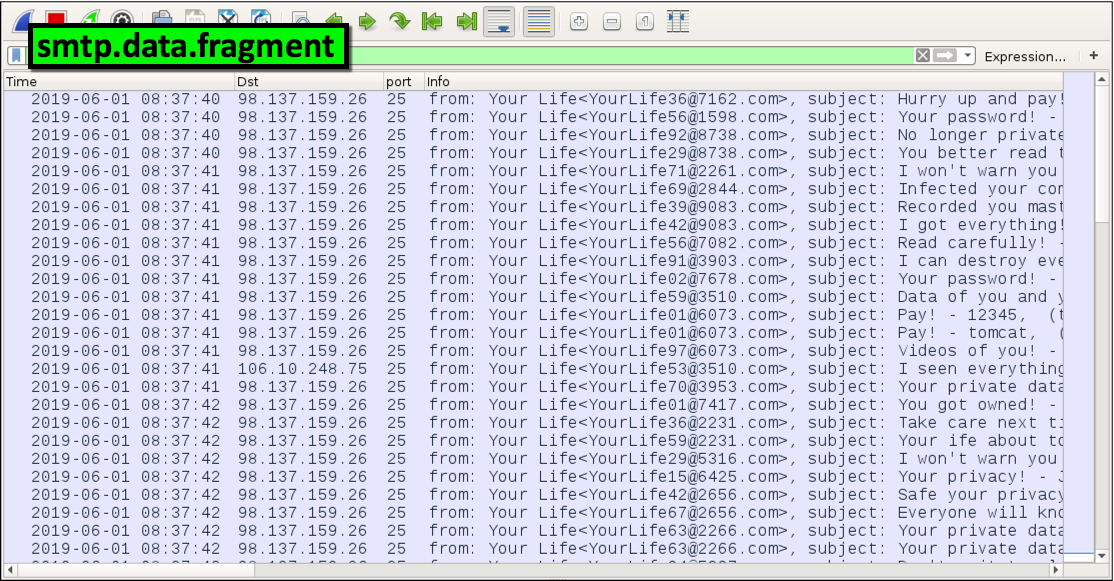 Figure 10. Filtering for email senders and subject lines in Wireshark.

You can export these messages using the menu path File --> Export Objects --> IMF... as shown in Figure 11. IMF stands for Internet Message Format, which is saved as a name with an .eml file extension. 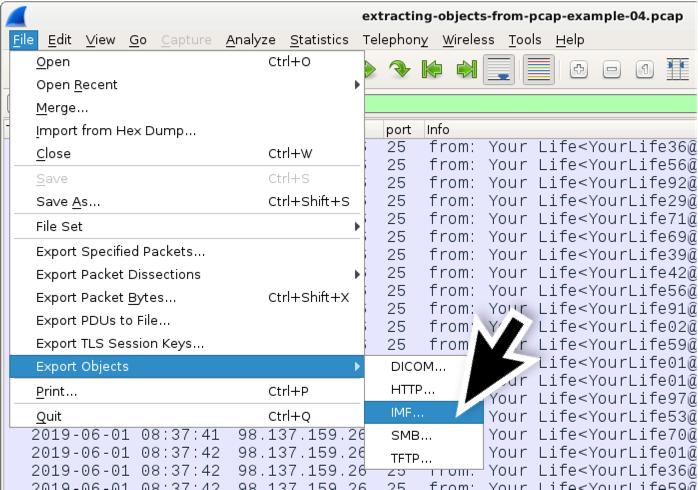 Figure 11. Exporting emails from a pcap in Wireshark.

The sextortion spam messages are all listed with an .eml file extension in the IMF object list as shown in Figure 12. 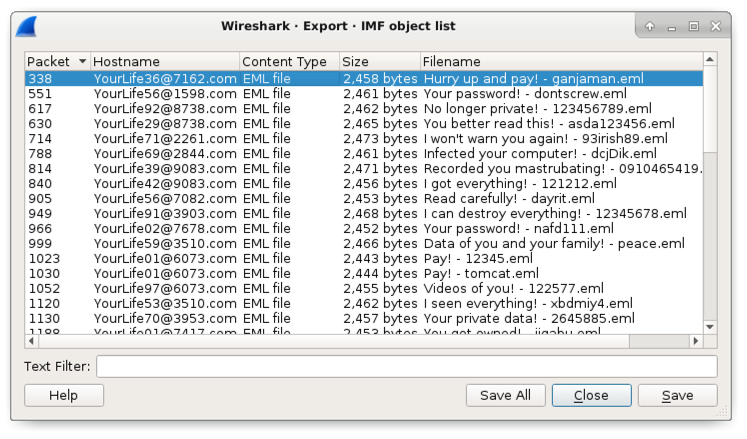 After they are exported, these .eml files can be reviewed with an email client like Thunderbird, or they can be examined in a text editor as shown in Figure 13. 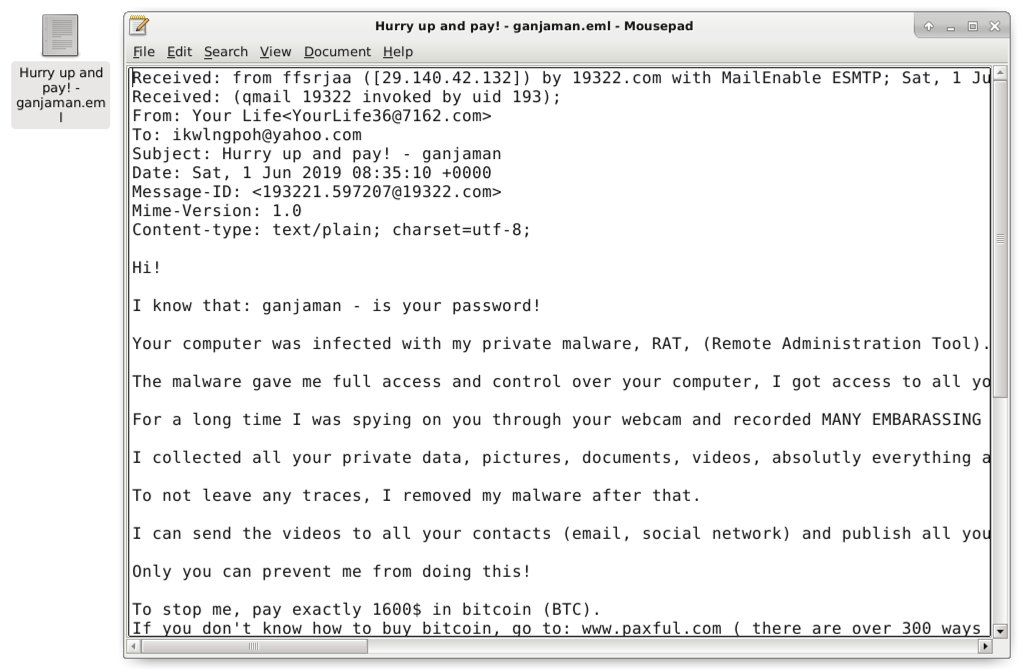 Figure 13. Using a text editor to view an .eml file exported from the pcap.

Some malware families use FTP during malware infections. Our next pcap has malware executables retrieved from an FTP server followed by information from the infected Windows host sent back to the same FTP server.

The next pcap is extracting-objects-from-pcap-example-05.pcap and is available here. Open the pcap in Wireshark. Filter on ftp.request.command to review the FTP commands as shown in Figure 14. You should find a username (USER) and password (PASS) followed by requests to retrieve (RETR) five Windows executable files: q.exe, w.exe, e.exe, r.exe, and t.exe. This is followed by requests to store (STOR) html-based log files back to the same FTP server approximately every 18 seconds. 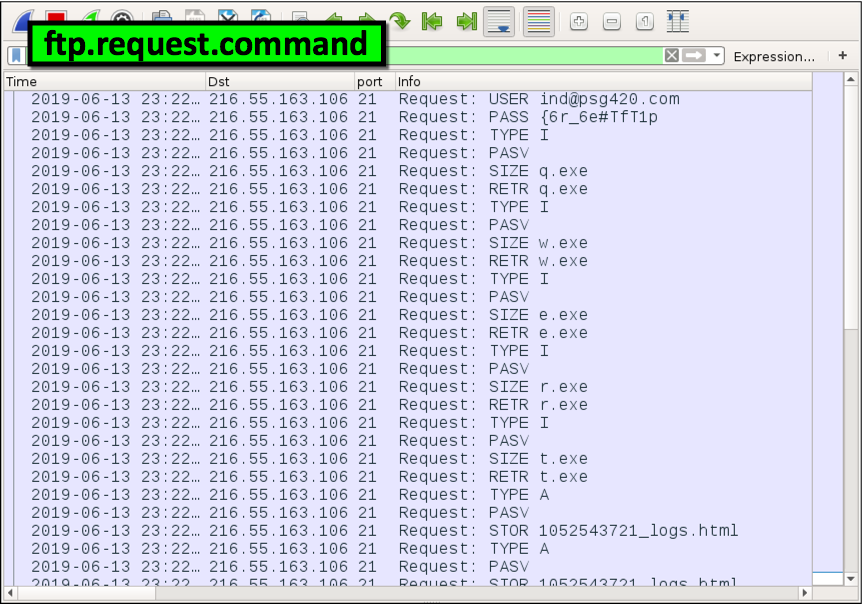 Now that we have an idea of the files that were retrieved and sent, we can review traffic from the FTP data channel using a filter for ftp-data as shown in Figure 15. 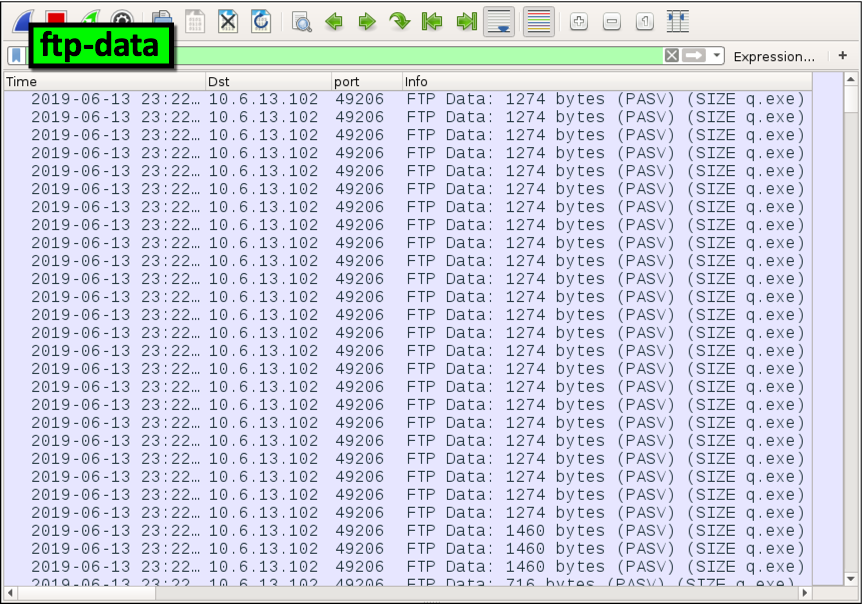 We cannot use the Export Objects function in Wireshark to export these objects. However, we can follow the TCP stream from the data channels for each. Left-click on any of the lines that end with (SIZE q.exe) to select one of the TCP segments. Then right-click to bring up a menu and select the menu path for Follow --> TCP stream as shown in Figure 16. 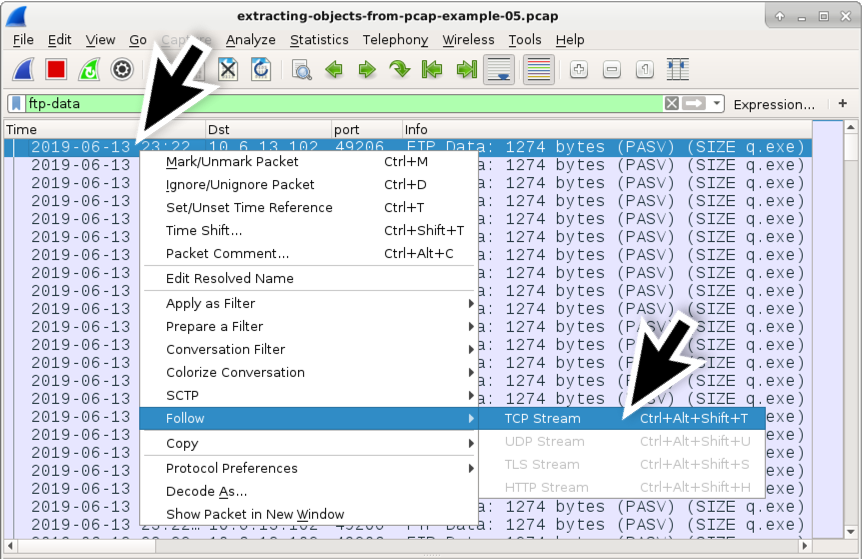 Figure 16. Following the TCP stream of an FTP data channel for q.exe.

This will bring up the TCP stream for q.exe over the FTP data channel. Near the bottom of the window is a button-style menu labeled "Show and save data as" which defaults to ASCII as shown in Figure 17. Click on the menu and select "Raw" as shown in Figure 18. 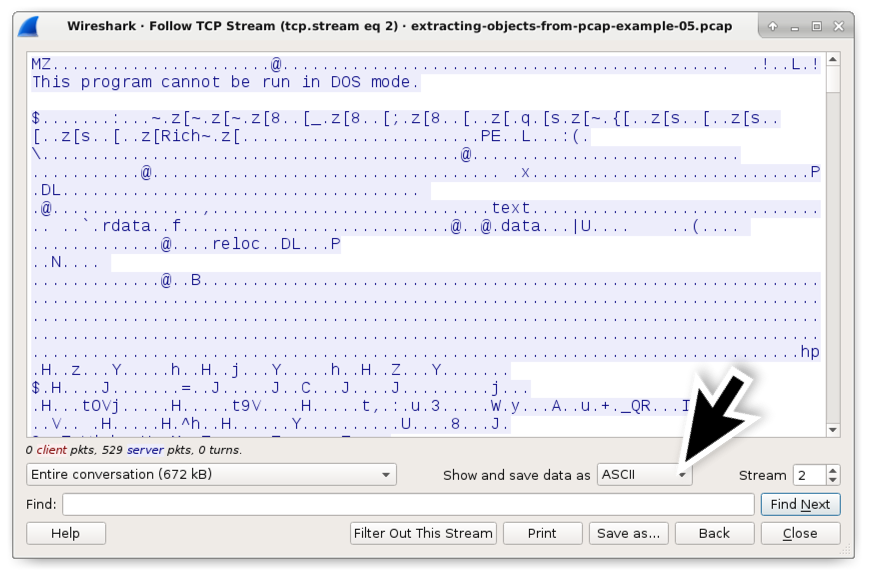 Figure 17. The TCP stream window for q.exe. Note the "Show and save data as" button-style menu. 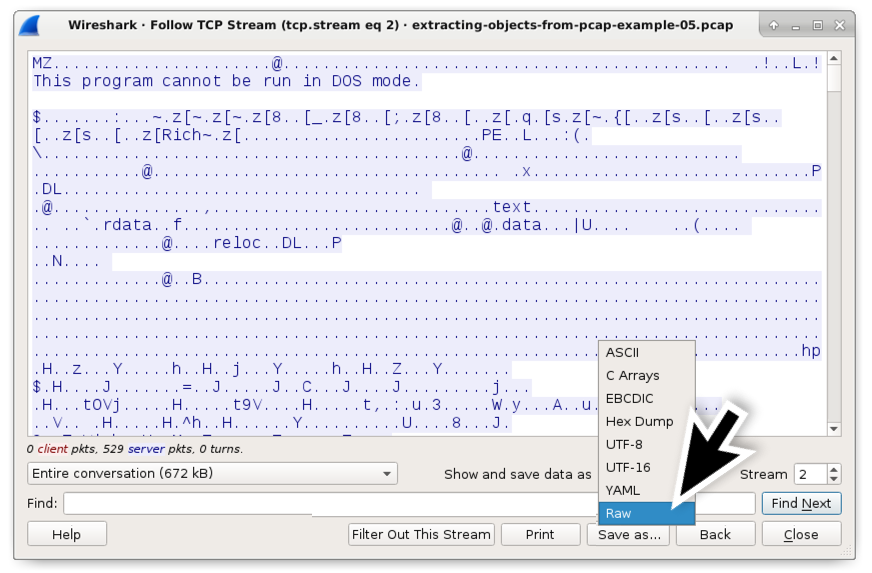 Figure 18. Selecting "Raw" from the "Show and save data as" menu. 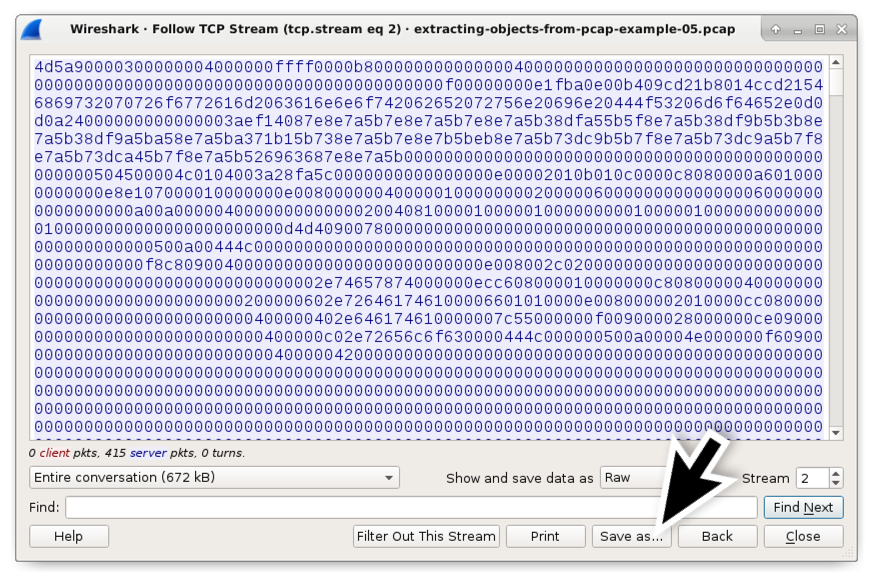 Figure 19. Saving the data from a TCP stream as a raw binary.

Save the file as q.exe. In a Linux or similar CLI environment, confirm this is a Windows executable file and get the SHA256 hash as shown below.

The SHA256 hash shows a high detection rate as malware on VirusTotal. Follow the same process for the other .exe files in the pcap:

This should give you the following files as shown below in Table 3.

Figure 20. The same file name used for sending stolen info back to the FTP server.

To see the associated files sent over the ftp data channel, use the filter ftp-data.command contains .html as shown in Figure 21.

Figure 21. Filtering on files with .html in the file name over the FTP data channel.

We use the same process as before. Instead of focusing on the file names, focus on the TCP ports. Follow the TCP stream for any of the TCP segments using port 52202. In the TCP stream window, change "Show and save data as" to "Raw." Then save the file. Do the same for the HTML file over TCP port 57791.

If you do this for all five HTML files, you'll find they are the same exact file. These text-based HTML files contain data about the infected Windows host, including any passwords found by the malware.

Using the methods outlined in this tutorial, we can extract various objects from a pcap using Wireshark. This can be extremely helpful when you need to examine items from network traffic.