This Unit 42 blog provides insights into the ransomware attacks referred to as LockerGoga.

The LockerGoga ransomware was first publicly reported in January by Bleeping Computer, which tied the malware to an attack against French engineering company Altran Technologies. Several variants have since been found in the wild, where they were used in attacks against Norwegian aluminum manufacturer Norsk Hydro and two chemical companies: Hexion and Momentive. Unit 42 reviewed malware samples from these attacks and found evidence that caused us to question the origin of the threat name.  “LockerGoga” was taken from a string that did not exist anywhere in the code used in the original attack on Altran.  Bleeping Computer reported that the name came from this source code path discovered by MalwareHunterTeam:

We were able to find this string referenced in earlier ransomware variants identified as Ransom.GoGalocker by Symantec, but not in the sample identified in Bleeping Computer’s report. To avoid confusion, we will continue to use the LockerGoga name to refence the initial variant and its predecessors. Palo Alto Networks has identified 31 ransomware samples that are similar in behavior and code to the initial variant. In this report we will attempt to trace back to the origin of these samples, discuss their evolution, then expose some of their inner working capabilities and even faults.

Currently LockerGoga does not support any worm-like capabilities that would allow it to self-propagate by infecting additional hosts on a target network.  We have observed LockerGoga moving around a network via the server message block (SMB) protocol, which indicates the actors simply manually copy files from computer to computer.

This sample requires administrative privileges in order to successfully execute, though the specific mechanism for initial code execution is unknown.  Once it executes it seeks to encrypt files on the infected computer and any attached hard drives.  Once it’s fully executed, it leaves a ransom note on the user’s desktop containing an email address to contact presumably for decryption and payment options.

The initial sample was written in the C++ programming language and employs publicly available libraries such as Boost, Cryptopp and regex.  This sample includes a denylist that excludes the following files and directories from encryption:

The malware does not support any self-propagating code to infect other hosts on the network and is signed by a certificate issued in the name MIKL LIMITED, which has been revoked.  The following command line arguments are also supported:

LockerGoga uses the Cryptopp library to implement RSA, as implementing RSA from scratch would be very time consuming and error prone.  To encrypt files, (Strong RSA) RSA-OAEP MGF1(SHA-1) is used.  The RSA public key found in this sample is:

Although RSA-OAEP MGF1 has features that make it more secure, the added computational overhead causes encryption to take longer and has difficulty handling large files.  To mitigate this, the developers launch multiple child processes that work in parallel to maximize encryption speed.  To overcome large files, the developers decided to encrypt chunks of a file every 80,000 bytes and skip the next 80,000 bytes of a file.  Example: 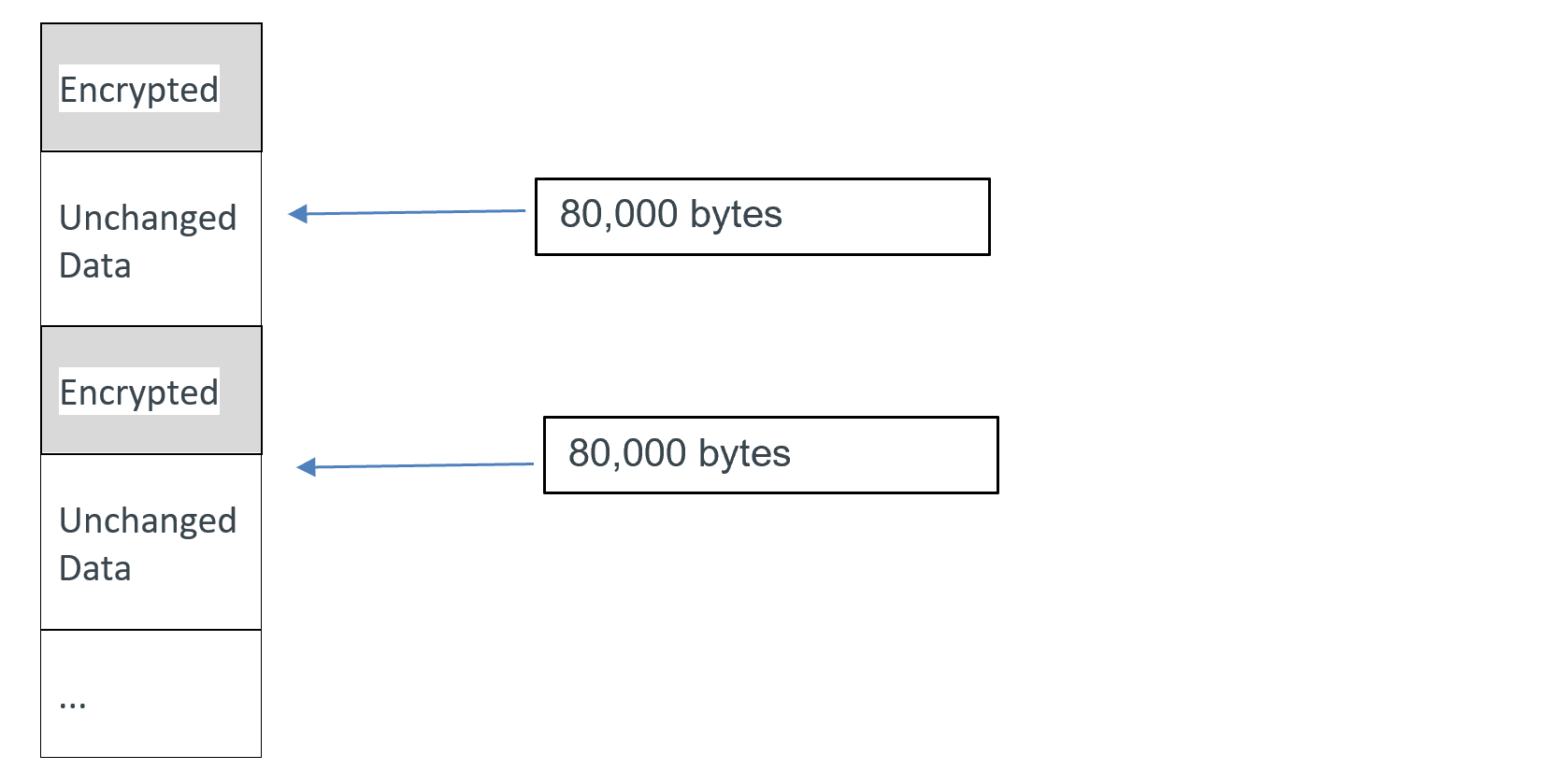 Because of this, partial recovery of large files might be possible even without the decryption key.

Based on our analysis, we believe this variant is an early release of LockerGoga ransomware. The developers left behind command line parameters such as -r which allows the malware to run without encrypting anything.  This can be used in conjunction with -l (log) to test how the ransomware behaves.  Both of these parameters are suggestive of an initial, or test, build.  The -r specifically was not observed in later variants.

According to the Bleeping Computer report, the ransomware appeared to encrypt only the following specific file extensions: doc|dot|wbk|docx|dotx|docb|xlm|xlsx|xltx|xlsb|xlw|ppt|pot|pps|pptx|potx|ppsx|sldx|pdf.

Our analysis found that the malware does not use the code block that checks for specific file extensions.  Instead, we observed that the malware encrypts all files except those in the denylist. It also has issues with large files, which is addressed in later variants.

Like other active software projects, the LockerGoga ransomware is under constant development with new variants being developed and used to attack victims.  All these variants share similar characteristics and just like other professional development, each release contains improvements or new capabilities.

To counter this ongoing development cycle, security researchers have to focus on identifying new variants.

To that end, we highlight some of the evolutionary changes we have observed since the malware surfaced in January:

LockerGoga’s developers continue to add capabilities and launch new attacks.  The addition of WS2_32.dll and use of undocumented Windows API calls indicates a level of sophistication beyond typical ransomware authors. The former could lead to the eventual inclusion of C2 communication or automated propagation, and the latter requires some working knowledge of Windows internals.

These features raise more questions about the actor’s intent as ransomware is typically one of the least advanced forms of malware:  Are they motivated by profits or something else? Has the motive change over time?  Why would developers put such effort into their work only to partially encrypt files. Why do they include an email address and not seek payment through more frequently used cryptocurrencies?

We do not know if any of the victims have paid the ransom and were able to successfully retrieve their data. We do know that this ransomware has caused significant harm. The damage could increase significantly if  the attackers continue to refine this ransomware. Unit 42 will continue to monitor LockerGoga and report on new activity.

The latest variant of LockerGoga uses memory mapped files to communicate between processes.  To illustrate this, we captured the memory of a section created by a child process.

The 1st byte (02) instructs the master process to process the data below. The data is base64 encoded in three parts and decodes to the following:

Example of initial variant of LockerGoga running on a host: