By Tom Lancaster and Josh Grunzweig

In 2017, Unit 42 reported on and analyzed a low-volume malware family called Cardinal RAT. This malware family had remained undetected for over two years and was delivered via a unique downloader named Carp Downloader. Since that publication, we have continued to monitor this threat, resulting in the discovery of a series of attacks using an updated version of Cardinal RAT. A series of modifications have been made to the RAT, many of which are used to evade detection and hinder analysis.

We witnessed attacks targeting the financial technology (FinTech) sector, primarily focused on organizations based in Israel. While researching these attacks, we discovered a possible relationship between Cardinal RAT and another malware family named EVILNUM. EVILNUM is a JavaScript-based malware family that is used in attacks against similar organizations.

Since the original discovery of Cardinal RAT, the attackers have made some minor updates that are worth discussing, particularly regarding obfuscation techniques. For the sake of this analysis we’ll look at the most recent version of Cardinal RAT:

The last time we wrote about Cardinal RAT in 2017, we looked at version 1.4 of the malware family. We identify this latest sample as version 1.7.2 based on information within the payload. Unlike previously discussed samples, this latest instance of Cardinal RAT employs various obfuscation techniques to hinder analysis of the underlying code. The first layer of obfuscation comes in the form of steganography; the initial sample is compiled with .NET and contains an embedded bitmap (BMP) file. 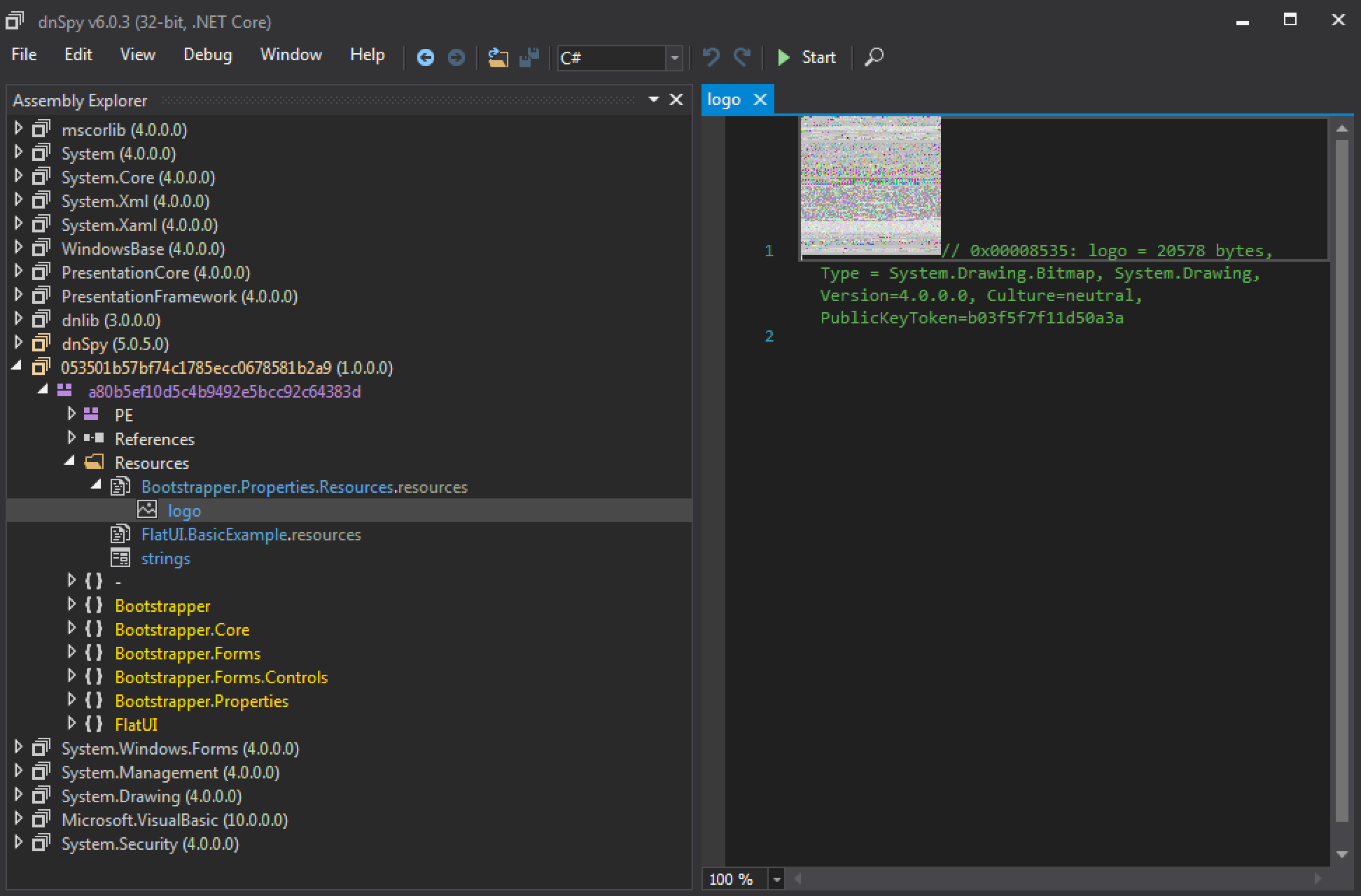 Upon execution, the malware will read this file, parse out pixel data from the image, and decrypt the result using a single-byte XOR key. We have provided a Python script to automate this process in the Appendix of the blog post. The result is a DLL also compiled with .NET, with the following hash:

After this file has been loaded in memory, the initial loader will load and execute the ‘corerun’ function, initiating the second stage of the malware. The DLL begins by performing a sleep using the built-in Windows choice utility:

The command prompts the user for a choice with a 20 second timeout, at which point the process will exit. Since the window is hidden, and there is no utility for this choice, the malware simply uses this as an alternative sleep command.

The second stage DLL reads in the ‘strings’ embedded resource from the first stage executable. Part of this resource is decrypted to provide configuration information to the dropper. This configuration information will instruct whether or not the malware enters its installation routine. In the installation routine, it begins by writing a unique GUID identifier to %TEMP%\[random].ini. Afterwards, it creates the following directory:

It then writes an embedded executable with the hash below to %TEMP%\[random].exe. This file has an internal filename of RunExecutive.exe and simply copies the contents of argument #2 to the file path specified in argument #1.

The malware creates an LNK file in the victim’s startup folder with a randomly generated filename using a GUID (Example: {fcb29182-b3cc-47e2-a95c-b22c6d87dda1}.lnk). The LNK file executes the following command:

The remaining segment of the embedded resource is decrypted using a 16-byte XOR key, resulting in a .NET executable. This executable is injected into one of the following two legitimate executables or processes on the system:

In previous versions of this malware family, there were a larger number of legitimate processes Cardinal RAT would inject into. The final payload has the following hash:

Underneath all this obfuscation, this Cardinal RAT payload does not have any significant changes compared to the previously discussed version in terms of its operation or capabilities. One of the most significant changes lies in the obfuscation used by the malware; all of the functions, methods, and variables have been renamed to MD5 hashes. 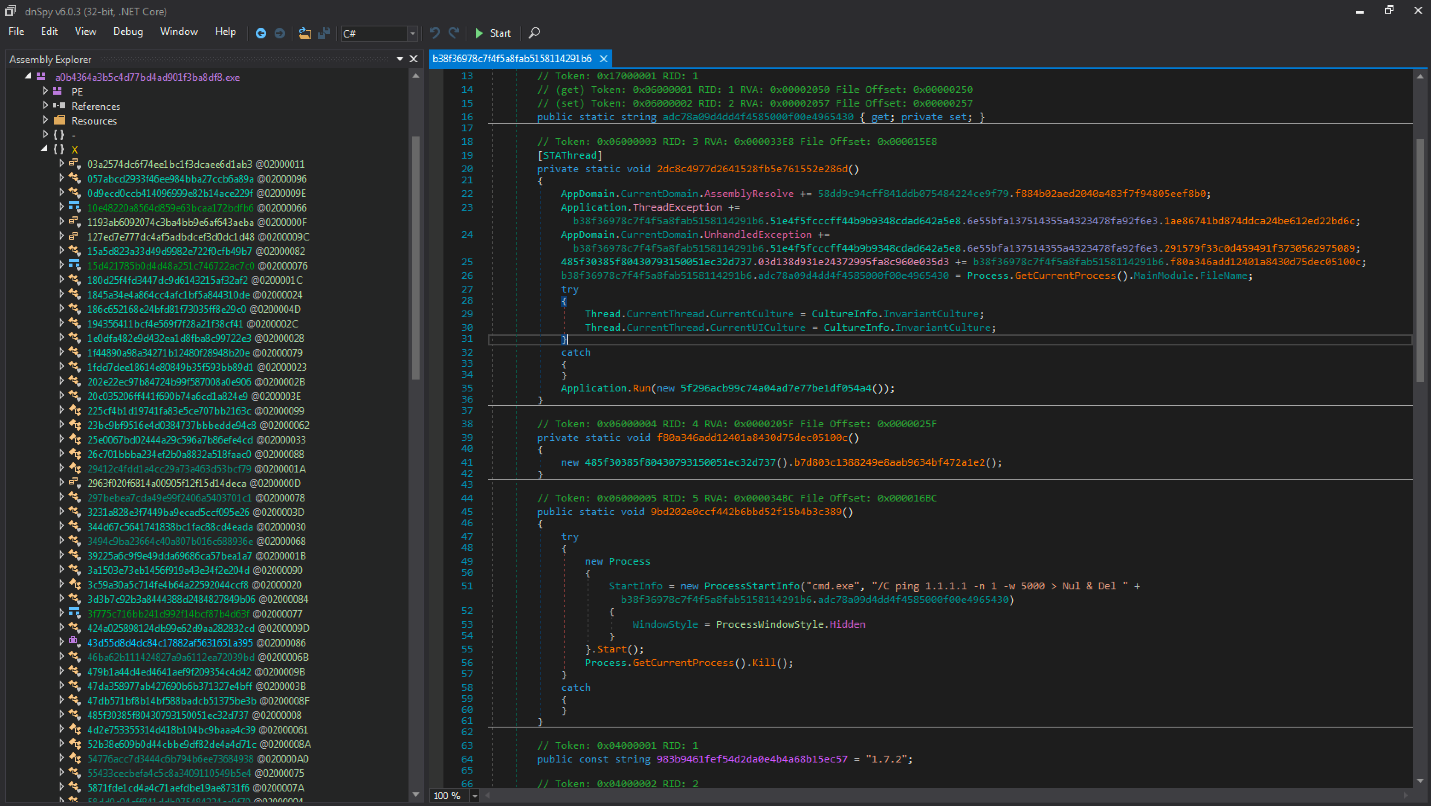 In addition to the obfuscation routines in use, there have been a few minor changes within the malware itself. First, the embedded configuration has a few changes both in the order of the embedded values, as well as what values are present. Additionally, the way this configuration is encoded has changed slightly, as several values that were previously base 64 encoded in version 1.4 are no longer base64-encoded.

Network communication and actions available to the remote operator remain consistent between versions. The script provided in our previous report continues to work as expected against the network traffic generated by this malware family. The following actions continue to be present within the malware:

When looking at files submitted by the same customer in a similar timeframe to the Cardinal RAT samples, we saw that the customer had also submitted a malware family we’d been tracking as EVILNUM. From our viewpoint this is another family that seems to be used solely in attacks against finance related organisations.

When we cross-referenced submissions to online sandboxes, we found an additional case to ours, where another organization had submitted both EVILNUM and Cardinal RAT on the same day; both of which are rare malware families with limited distribution.

We opted to use the name EVILNUM, since in some versions of the malware the C2 is calculated by reading the page, parsing a numerical value, dividing it by 666 and then converting the resulting decimal to an IP address. There are at least two versions of this malware, one written in JavaScript, and another written in .NET.

Despite the differences in programming language used, the samples are similar, and we believe the .NET edition is likely a rewrite of the .JS version.

EVILNUM has been covered in the public domain previously (albeit with no name assigned to the malware family) and has been noticed by multiple analysts on Twitter. It’s a first-stage malware family which gives an attacker data about the infected host before they decide to install other utilities on the machine. EVILNUM’s supported commands vary from version to version and include but are not limited to:

Since the operation of the malware is well covered already in the pwncode article, we’ll simply illustrate a few of the differences and similarities between the older and newer versions of the malware in the table below:

Table 1. Highlights of the similarities (in green) and differences (in red) between EVILNUM versions

The malware appears to have been given a general rewrite, (as indicated by the authors’ version number) with many functions being rewritten from scratch.

Despite this, the core functionality of the malware is mostly the same, and some of the concepts used in the malware family (such as the lock file) remain the same. It’s likely that the malware only serves as a first stage and the attackers deploy further tools to target networks of interest.

Since April 2017, we have observed Cardinal RAT in attacks against two customers, both customers were FinTech companies who write software relating to forex and cryptocurrency trading, and both companies were based in Israel. Looking at submissions to VirusTotal, there are 13 Carp Downloader documents. Note that we are only looking at submissions for “entry” type files, not subsequent dropped files. When looking at the first submitters for these documents in Figure 1, we see they are predominantly uploaded from Israel.

Figure 3. Distribution by country for Carp Downloader submissions to VirusTotal

In the case of EVILNUM, we have only seen one instance at a customer (the same one we referred to earlier in this article). When it comes to investigations from public sandboxes though, the distribution of the initial files used in infections is most commonly via LNK files. The geographical distribution of first submitters for EVILNUM is quite different, as shown in Figure 4.

Figure 4. Distribution by country for EVILNUM submissions to VirusTotal

Cardinal RAT and EVILNUM are both used in limited distribution attacks against FinTech companies. In one case, both families were observed at the same target in a short space of time, whilst droppers for both families share similarly themed lure documents.

We suggest that these families are used in targeted attacks against FinTech companies because:

We believe it’s possible that both families are used by the same attackers because:

However, there are a number of arguments against the two families being related:

Even if the two families are not linked, they both have similar targeting interests, and so FinTech organisations should ensure they are protected against the malware used. Whilst we haven’t been able to gain an insight into what the attackers do once successfully on a target network, it’s likely (based on the targets) they use their access to facilitate financial gain.

Organizations with effective spam filtering, proper system administration, and up-to-date Windows hosts have a much lower risk of infection. Generic defenses against these threats include:

Palo Alto Networks customers are further protected from this threat by:

for ind, h in enumerate(range(height)):