While recently researching unknown malware and attack campaigns using the AutoFocus threat intelligence platform, Unit 42 discovered new activity that appears related to an adversary group previously called “C0d0so0” or “Codoso”. This group is well known for a widely publicized attack involving the compromise of Forbes.com, in which the site was used to compromise selected targets via a watering hole to a zero-day Adobe Flash exploit. Compared to other adversary groups, C0d0so0 has shown the use of more sophisticated tactics and tools and has been linked to leveraging zero-day exploits on numerous occasions in combination with watering hole and spear phishing attacks.

In the newly discovered attack campaign, Unit 42 identified attacks targeting organizations within the telecommunications, high tech, education, manufacturing, and legal services industries. The attacks likely were initially delivered via spear-phishing e-mails, or as demonstrated by C0d0so0 in the past, legitimate websites that had been previously compromised then used as watering holes for the selected victims.

In such situations, the victims would then be redirected to another set of compromised websites. These websites hosted malware that would be side-loaded with a legitimate signed executable. These tactics are becoming increasingly common by malware authors in order to evade security products and controls. Two variants of the malware employed by C0d0so0 were discovered—one that used HTTP for command and control (C2) communications, and one that used a custom network protocol over port 22.

In these newly discovered C0d0so0 attacks, several of the targeted hosts were identified as server systems, instead of user endpoints, suggesting the possibility that these specific targets will be used in future attacks as additional watering holes. Both of the malware variants encoded and compressed the underlying network traffic to bypass any network-based security controls that were implemented.

The malware variants in question do not appear to belong to any known malware family, although the structure of the network communication does bear a resemblance to the Derusbi malware family, which has shown to be unique to Chinese cyber espionage operators. Past observations of Derusbi in various attack campaigns indicate the version used was compiled specifically for that campaign. Derusbi has had both the client and server variants deployed, using different combinations of configurations and modules. The newly discovered activity is consistent with this procedure, with compile times only a few days prior to the observed attacks. The following primary C2 servers for the malware variants were identified:

The ‘jbossas’ and ‘supermanbox’ domains were found to resolve to the same Hong Kong based IP address, 121.54.168.230. A total of three unique samples were identified communicating with these two domains using the raw network protocol communicating over port 22. They used what appeared to be three separate legitimate websites that looked to be compromised for malware distribution.

The ‘microsoft-cache’ domain was used by the malware variant that communicated over HTTP. We found four unique samples communicating with this domain, which resolved to the same Hong Kong-based IP address used by the first two domains.

This variant was disguised as a serial number generator for the popular AVG anti-virus product. When executed, the binary will drop and run the serial generator for AVG. It will also drop the following two files:

The dropped DLL in question is sideloaded with the legitimate fakerx86.exe executable, which is the symbolic debugger for Microsoft Windows.

Upon loading the malicious DLL, a number of encrypted blobs are decrypted using single-byte XOR keys. Strings are separated by five bytes of junk data, which is consistent across all samples witnessed.

The following IDAPython script can be used to both decrypt and parse these encrypted blobs:

After various data is decrypted, the malware will ensure that it is not running within the context of the rundll32.exe executable. This simple check acts as a simple anti-reversing mechanism, and ensures it is not running in either an analyst environment or a sandbox.

It continues to ensure persistent execution by setting the following registry key:

The malware variant continues to spawn new threads that are responsible for network communication and other malicious activities. It then gathers information about the victim machine, including the following:

This information will eventually be exfiltrated via a HTTP POST request, as seen below. The data sent is base64-encoded. All network communication for this malware variant takes places over HTTP. The server will respond with data similar to the following: The malware will parse the ‘background-color’ parameter in the C2 response to determine what offset it will read. In the above example, the ‘028300’ is converted to an integer and divided by 100 to produce a result of 283. The malware proceeds to read in data at offset 283. The first four bytes of this data represent the total length. The remaining data is base64-decoded and parsed. This base64-decoded data has the following data structure:

The server will respond with a DLL file that has the following exports:

When loaded, this DLL attempts to download further plugins from the remote server. At the time of analysis, no plugins were available as the command and control server was no longer active.

This variant, which appears to be more recent than the HTTP variant, is delivered via the filename of ‘McAltLib.dll’ and is configured to be side-loaded with the legitimate McAfee mcs.exe executable. 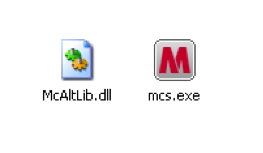 When initially loaded, the malware will register itself as a service with the following parameters:

Additionally, the following registry keys are set or modified:

Throughout execution of this variant, it will call a function responsible for decrypting subsequent instructions. After the instructions have completed executing, another function is called that will re-obfuscate the previously executed instructions. This acts as an anti-reversing technique by the author. The other thread is responsible for collecting victim information, communicating with a remote host, and downloading/loading further malware. It begins by generating and parsing a configuration string. The following configuration string is used in this particular instance of the malware:

It proceeds to collect the following information from the victim:

This information is exfiltrated in a newly spawned thread with a randomly chosen delay timer of 1-3 minutes in between attempts.

The malware then proceeds to send an initial beacon to the hostname/port that is configured within the binary. This data contains victim information that was previously collected and the server responds with an acknowledgement. The malware proceeds to send a packet containing the victims MAC address. These packets have the following structure:

In the above example, only the first byte of the XOR key (0x84) is used for decryption. After the data is decrypted using this single-byte XOR key, it will then be decompressed using the LZO algorithm. The data represented above becomes the following after decryption and decompression takes place:

This string is generated via the MAC address of the victim machine. The MAC address is converted from its original hexadecimal representation to an integer and formatted via a call to printf. It is most likely used as a unique identifier for the victim. Finally, the malware sends a similar request, only with a packet type of ’00 07 02 00’. The server responds with a DLL file that has the following exports:

When loaded, this DLL attempts to download further plugins from the remote server. At the time of analysis, no plugins were available as the command and control server was no longer active.

When Forbes.com was compromised in November 2014, victims were infected with malware that loaded a file named wuservice.dll. Reverse-engineering this file indicates that the McAltLib.dll file identified in this attack is most likely a newer variant of the malware found in the forbes.com attack.

Of particular note, both samples use a single-byte XOR obfuscation routine where a large buffer is decrypted. Strings are separated by five bytes of garbage, as seen below.

As seen in the above screenshot, there is a large overlap in unique strings in both samples. The original sample involved in the forbes.com breach used HTTP, which is consistent with the original variant discussed in this blog post. It should be noted that while the newest variant that uses direct network communication over port 22 no longer uses HTTP, references to the HTTP strings are still found within the sample itself. This is most likely due to code re-used by the attackers.

Overall capabilities between the forbes.com sample and the newest variants discussed are consistent. All samples execute the same overall capabilities, gathering and uploading victim information and attempting to download a secondary DLL then calling that DLL’s ‘StartWorker’ exported function.

The tactics, techniques, and procedures (TTPs) used by C0d0so0 appear to be more sophisticated than many other adversary groups with multiple layers of obfuscation in use, as well as specific victim targeting in what appears to be an attempt at creating a staging area for additional attack.

Unit 42 will continue observation and research on this group’s activity, as it appears this may be the beginning of the campaign. At this time, the following protections are in place for Palo Alto Networks customers: