By Cong Zheng and Tongbo Luo

Recently, we discovered a new Google Android Trojan named “PluginPhantom”, which steals many types of user information including: files, location data, contacts and Wi-Fi information. It also takes pictures, captures screenshots, records audios, intercepts and sends SMS messages. In addition, it can log the keyboard input by the Android accessibility service, acting as a keylogger.

PluginPhantom is a new class of Google Android Trojan: it is the first to use updating and to evade static detection. It does this by leveraging the Android plugin technology. It abuses the legitimate and popular open source framework “DroidPlugin”, which allows an app to dynamically launch any apps as plugins without installing them in the system. PluginPhantom implements each element of malicious functionality as a plugin, and utilizes a host app to control the plugins. With the new architecture, PluginPhantom achieves more flexibility to update its modules without reinstalling apps. PluginPhantom also gains the ability to evade the static detection by hiding malicious behaviors in plugins. Since the plugin development pattern is generic and the plugin SDK can be easily embedded, the plugin architecture could be a trend among Android malware in the future.

We believe PluginPhantom is a successor to the Android Trojan “Android.Trojan.Ihide”, which was discovered by TrustLook in July of 2016, since they share the same certificate and package name. PluginPhantom not only includes and improved all malicious functionalities from “Android.Trojan.Ihide”, but also adopts a very innovative design architecture. In the new architecture, the original malware app is divided into multiple apps (plugin apps) and a single app (a host app). The host app embeds all plugin apps in resources, which implement different functional modules. After victims install the host app, it can directly load and launch plugin apps without installing plugin apps, by abusing the legitimate open source plugin framework – DroidPlugin [2].

DroidPlugin is an innovative application-level virtualization/proxy framework, which was originally developed for purposes of hot patching, reducing the released APK size, and removing the 65535 methods limitation. The popular application scenario of DroidPlugin is launching multiple instances of apps on the same device (e.g. using multi-accounts in social apps). Fundamentally, DroidPlugin is very different from the widely known dynamic code loading (e.g. loading a dex or jar file), since it can directly load and launch an app from its APK file without installation. There are five basic concepts or mechanisms in the implementation of DroidPlugin:

In the plugin design architecture, PluginPhantom has one host app (i.e. the malicious APK we captured) and nine plugin apps that are embedded in the host app as assets files.  In these nine plugins, there exists 3 core plugins (“task”, “update” and “online”) and six additional plugins (“file”, “location”, “contact”, “camera”, “radio” and “wifi”), shown in Figure 1. 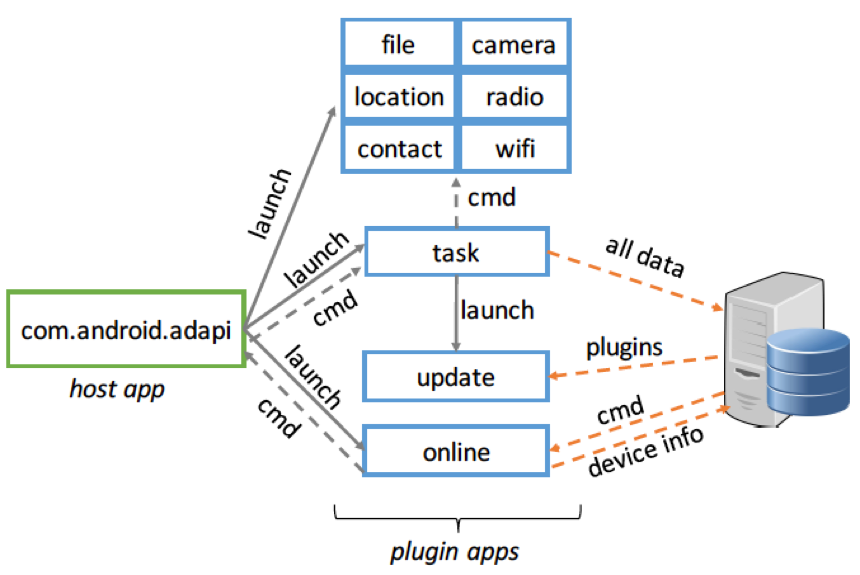 The host app, as the controller and the entry point of PluginPhantom, schedules plugin apps by launching them and sending commands. In the initialization stage, the host app loads nine APK files in asset files and installs them as plugins in the DroidPlugin framework. Then, the host app can launch and communicate with plugins the same way it would with normal Apps installed on Android.

The online plugin, connects to the command and control (C2) server to upload device information (e.g. the screen state, the battery volume and the free RAM size) and retrieve commands to execute. The online plugin firstly finishes a “ThrowOut” step to probe the remote server by sending the “UUID” (from “java.util.UUID.randomUUID()”) in a UDP socket.  If the “UUID” is sent successfully, then, the online plugin continues to utilize the WebSocket to pull the command data from the server.

3. IPC and Data Sharing in PluginPhantom:

The file plugin scans a specific directory and retrieves information (e.g. file name, file type, file size, create time, edit time, file path, canonical path and read state), from the files inside it. It also scans media files in the external storage and can download and delete specific files.  During the file operation, the root privilege is used by the file plugin if necessary. In existing samples, PluginPhantom is trying to use the root privilege, but does not root the device. If the attacker wanted root access on the device, they could use the C2 channel to install an APK which exploits an unpatched local root vulnerability, but we have not yet observed this occur with PluginPhantom infections.

The location plugin obtains both fine-grained and coarse-grained location information. It converts coordinates in the Android default geographic coordinate system to coordinates in two other coordinate systems, which are used by Baidu Maps and Amap Maps, the top two navigation apps in China.  To successfully obtain the location, the plugin can enable WIFI, GPS (under Android 4.4) and mobile data (under or in Android 5.0) options.

The contact plugin intercepts incoming SMS and phone calls for specific numbers received from the remote server. To avoid detection, it turns off the ringtone and phone screen and deletes call logs when SMS and phone calls are coming in. The contact plugin also steals call logs, device IDs and contacts info (including deleted contacts) in both the phone contact list and the SIM card contact list. Additionally, it sends SMS messages to specific numbers, which is finished after checking the current phone bill balance.

The camera plugin takes pictures in the background through either the front or the back camera. It uses a surface view with 0.1*0.1 size for camera previewing, and a full screen Activity with the transparent theme and no title, so victims may be not aware of this behavior. It also takes screen shots by the command “screencap –p” if it has obtained root privileges on the device.

The radio plugin records the audio in the background with two trigger conditions: commands from the remote server and incoming/outgoing phone calls. To avoid detection, it doesn’t record audio if other apps are also recording.

Stealing Keyboard Inputs through Accessibility in the Host App

In the host app, a developer defined service named “AutoService” extends the “AccessibilityService” to hook all GUI events in the system (Figure 2). First it needs to trick users into enabling the accessibility permission to this app using it’s description shown in Figure 3, which pretends describes a fake “memory cleaning service.” 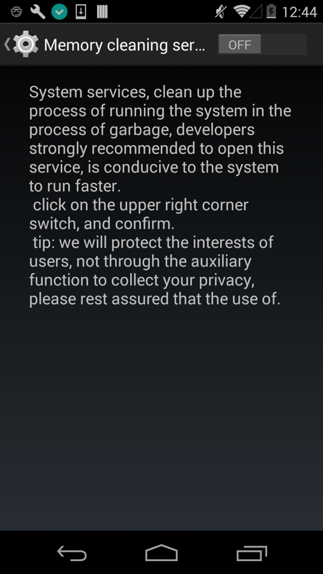 The host app uses the Android Accessibility feature to hook and operate on the specific Activity and package by referring the class name and package name, for two purposes:

2. Record the keyboard inputs for specific apps.  PluginPhantom logs user inputs, such as the text and window id, for all leaf nodes in the UI tree (Figure 5). Thus, the victims’ inputs in the EditText element can be logged. Note that password inputs cannot be logged. The text of password EditText node is always empty since the password attribute of this node is true. 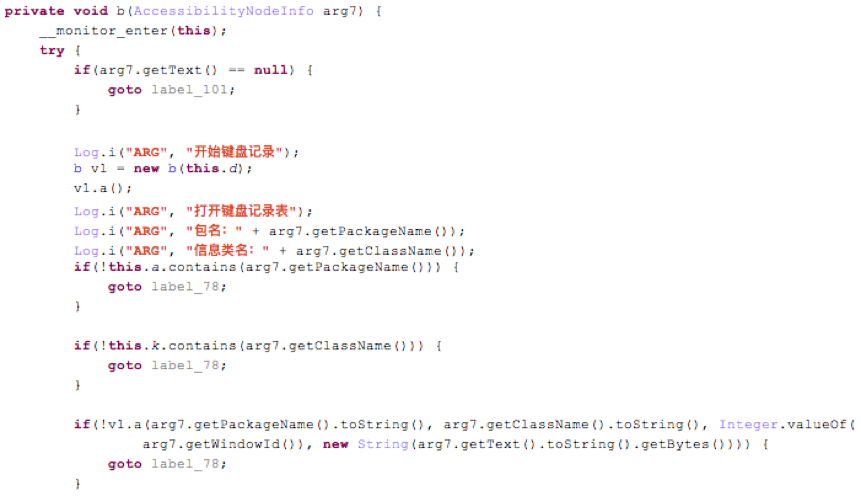 While the Android plugin technology is very hot in the Android app development, it also gives a chance to malware developers to redesign malware in a more flexible way. Like the PluginPhantom family, malware can easily update or add modules by updating or installing plugin apps. In terms of evasion, the plugin malware can hide all malicious behaviors in plugin apps, which can be downloaded and launched to bypass static detection. Additionally, the plugin technology might be a replacement of the repackage technique in the future. The plugin malware only needs to launch the original app as one plugin, and later launch malicious modules as other plugins. Even though the PluginPhantom is the first malware using the legitimate DroidPlugin framework, we will continue to watch and report this threat as attackers may use other plugin frameworks and launch more attacks.

Customers of Palo Alto Networks are protected with our WildFire, URL filtering and IPS services. AutoFocus users can identify samples of this malware using the PluginPhantom tag.

We greatly appreciate the help from Zhi Xu, Claud Xiao, Xin Ouyang, Ryan Olson and others from Palo Alto Networks in working on the analysis of PluginPhantom family.