Taiwan has been a regular target of cyber espionage threat actors for a number of years. Reasons for Taiwan being targeted range from being one of the sovereign states of the disputed South China Sea region to its emerging economy and growth with Taiwan being one of the most innovative countries in the High-Tech industry in Asia.

In early August, Unit 42 identified two attacks using similar techniques. The more interesting one was a targeted attack towards the Secretary General of Taiwan's Government office – Executive Yuan. The Executive Yuan has several individual boards which are formed to enforce different executing functions of the government. The Executive Yuan Council evaluates statutory and budgetary bills and bills concerning martial law, amnesty, declaration of war, conclusion of peace and treaties, and other important affairs. Given the important functions undertaken by the Executive Yuan office, it is not a surprise that they were targeted. The second attack was against an energy sector company also located in Taiwan.

The attacks in this case are associated with a campaign called Tropic Trooper, which has been active since at least 2011 and is known for heavily targeting Taiwan. One of the attacks used their known Yahoyah malware, but the other attack deployed the widely available Poison Ivy RAT.  This confirms the actors are using Poison Ivy as part of their toolkit, something speculated in the original Trend Micro report but not confirmed by them. Further analysis uncovered a handful of ties indicating the actors may also be using the PCShare malware family, which has not been previously tied to the group.

Figure 1 shows the spear phishing email which was sent to the Secretary General of Executive Yuan. The email is spoofed so that it appears as though it was sent from a staff member at the Democratic Progressive Party (DPP). 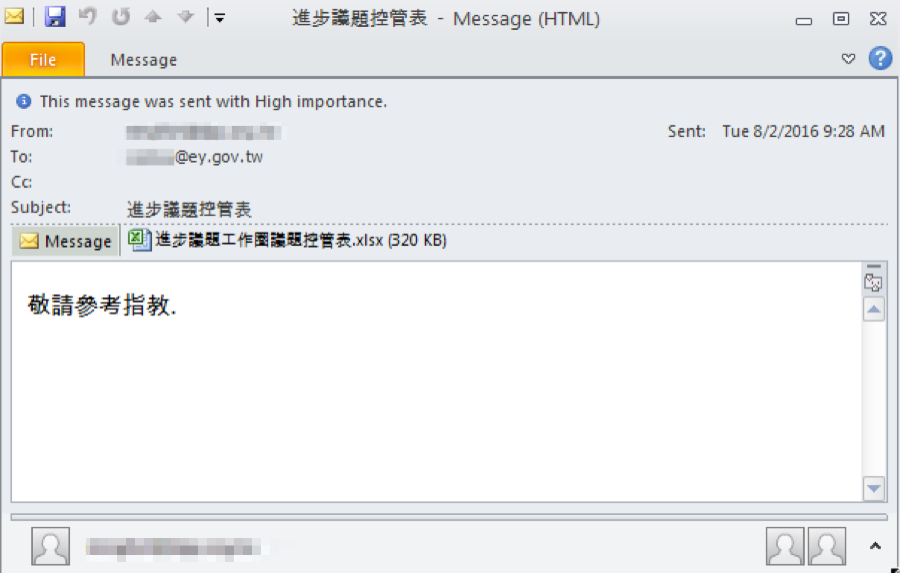 The document attached to this e-mail exploits CVE-2012-0158, a Microsoft Office vulnerability. This process is described in the Malware Analysis section later in this report, but one interesting aspect of this malicious was the decoy document the attacker chose to deploy.

As we have noted in many earlier reports, attackers commonly use decoy files to trick victims into thinking a malicious document is actually legitimate. After infecting the computer, the display a clean document to the victim that contains content that is relevant to them.

The decoy document used in this case is a spreadsheet with four tabs, respectively titled “example,” “0720,” “0721,” and “1041109 full update”. All of the text uses Traditional Chinese, in contrast to Simplified Chinese, which is the official written language of the People's Republic of China. Traditional Chinese is used in Taiwan, Hong Kong, Macau, and many overseas Chinese communities.  The overarching theme of the spreadsheet is documenting protestor activity and/or progressive reform attempts in progress across Taiwan and the tone of the spreadsheet suggests it was compiled by progressive supporters. Because we were unable to find the spreadsheet online, and there is specific persona data included related to these movements and protests, we are not including any screen shots except for the one below.

Figure 2. The four tabs in the decoy spreadsheet.

The “example” spreadsheet tab is exactly as described – it contains the headers and suggested information within two of the remaining three tabs. The headers themselves translate, from left to right, to “responsible department,” “issue,” “developments this week,” “political situation judgment,” and “related information.”  The tab labeled 0721 only has the matching headers and no additional information.  None of the information in the spreadsheet relates to activities past 2015, and there are references made to the then upcoming January 16, 2016 elections in Taiwan. In that election the DPP won, displacing the Chinese Nationalist Party (KMT) for only the second time in history, and with Taiwan’s first female President.

The spreadsheet labeled 0720 refers to the Anti-Black Box Movement, which was a protest by Taiwanese high school students against certain proposed curriculum changes. The use of “black box” by the protestors is in reference to former Taiwanese President Ma Ying-Jeou’s government and its lack of transparency concerning government decisions. Protestors occupied Taiwan’s Ministry of Education last July. A resolution passed by Taiwan’s legislature and approved by the Executive Yuan in May of this year delayed implementing that curriculum until 2020 to allow time for the act to be amended.

The Anti-Black Box Movement is related to the Sunflower Student Movement, a coalition of both student groups and other civic organizations that protested the Cross-Strait Trade Agreement between Taiwan and the PRC, feeling it would hurt Taiwan’s economy and increase the PRC’s sway over the island.  On March 17 2014, the KMT, the ruling party at the time, tried to force a vote without a previously agreed clause by clause review with the DPP. The following evening protesters occupied the Legislative Yuan, the first time that had occurred Taiwan’s history. On March 23 of the same year, after then President Ma re-affirmed he supported the pact and would not alter or drop it, protestors occupied the Executive Yuan where over 150 were injured and 61 arrested.

The final tab contains the most information of the three and has different headers. From left to right, the headers are titled “responsible person(s),” “summary of issues and major groups,” “crisis simulation, political judgment, and recommendations,” “degree of tension,” and “participating members.”

The documents attached to spear-phishing e-mails used in both attacks contain code that exploits CVE-2012-0158, which despite its age remains one of the most common Microsoft Word vulnerabilities being exploited by multiple threat actors. This matches with known Tactics, Techniques, and Procedures (TTPs) for Tropic Trooper, targeting both government institutions and also the energy industry in Taiwan.

The delivery document uses the XLSX extension typically used by OpenXML documents, but the file itself is actually an OLE (XLS) document. The file extension to file type discrepancy was caused by the actor using Excel's built-in encryption capability, which stores XLSX ciphertext and the information needed for decryption in an OLE document.

Table 1. Details of the malicious document attached to the e-mail.

The embedded shellcode enumerates open handles for a file with a size greater than 0xa6f0 (Decimal - 42736) bytes. It will then set the file pointer to 0xa6e8 (Decimal - 42728) and starts looking for the following delimiter:

If it finds this delimiter, the shellcode knows it is working with the correct file and continues by reading 0x600 (decimal 1536) bytes following this delimiter. The shellcode then decrypts the first 0xc0 (decimal 192) DWORDs of the data read from the file using an XOR algorithm that decrypts one DWORD of ciphertext at a time with 0x29f7c592. The resulting cleartext is a second piece of shellcode that continues carrying out further functionality.

Immediately following these API functions there are three DWORDS; one used to locate the payload embedded within the exploit file, one for the size of the payload, and one for the size of decoy document. The two size values are added together to get the length of the ciphertext that the shellcode will decrypt. In the sample we analyzed, the following values were present, showing that the payload is at offset 0xabc0 and has a size of 0x45218:

The shellcode then creates a string that it uses to create a registry key to automatically run the final payload each time the system starts. It then opens the registry key 'Software\Microsoft\Windows NT\CurrentVersion\Winlogon' and sets the value to the "Shell" subkey to the previously created string. Ultimately, the following registry key is created for persistence:

As you can see from the table above, the algorithm decrypts what is an embedded portable executable that acts as the payload in this attack. The embedded payload is written to %APPDATA\Identities\Identities.ocx and has the following attributes:

The decoy document, described in the section above, is saved to %TEMP%\進步議題工作圈議題控管表.xlsx and has the following attributes:

The shellcode will move the decoy document to the location of the originally executed XLSX file and will create the following command:

Before running the above command to open the decoy document, the shellcode enumerates the running processes on the system, specifically looking for processes created for an executable with a filename that starts with “avp.”, presumably in an attempt to find Kaspersky’s antivirus process. If the process is found, the shellcode will not open the decoy document and exits.

The shellcode does not launch the payload, rather it relies on the registry key it created for persistence to execute the payload when the user reboots the system, meaning during dynamic analysis the execution of the payload may be missed.

When the system starts up, the persistence registry key will launch the Identities.ocx payload and call its “SSSS” exported function. The “SSSS” function checks to make sure that the DLL is running within the context of a “rundll32.exe” process and then begins piecing 0x141B bytes of data together in the correct order to build the shellcode of the Poison Ivy Trojan.

We found and parsed the following configuration from the Poison Ivy shellcode:

Looking for more samples which exhibited the same file structure, encryption and obfuscation to deliver the above Poison Ivy sample yielded only two additional samples. In the other two instances the delivered payloads were respectively PCShare and Yahoyah.  PCShare has not been previously associated with Tropic Trooper, but in addition to the aforementioned overlaps, the two samples have passive DNS overlap with some known Tropic Trooper infrastructure. For those reasons, we assess with limited confidence the group is also using this malware family. 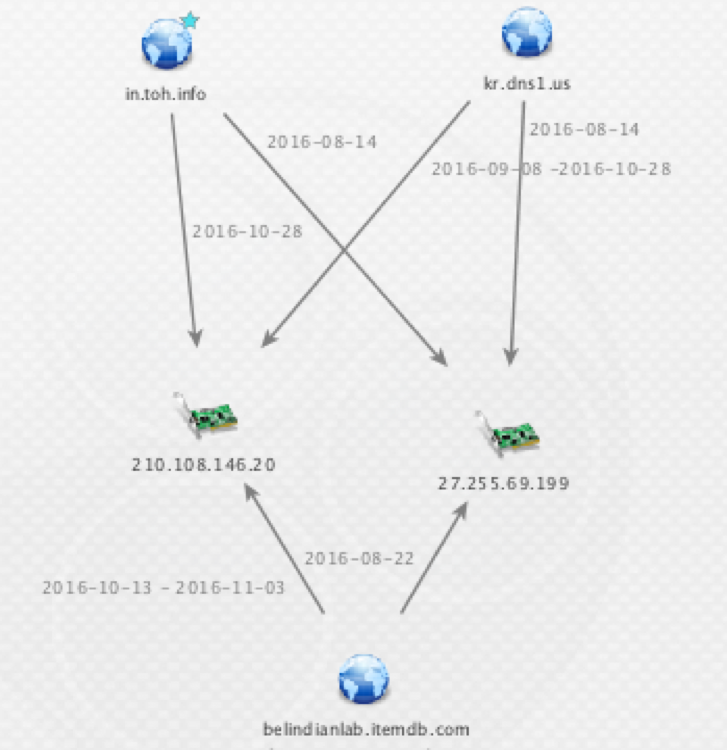 The below table shows the details of the documents, payload delivered and the C2 servers used for communications.

It is interesting to see that the exploit documents we found had either low or no detections on most popular antivirus engines, showing that the threat actors behind this campaign have been having considerable success in bypassing static analysis undertaken by traditional antivirus solutions with this technique.

We further expanded our search using the AutoFocus Threat Intelligence platform on the IOCs extracted from the PIVY, PCShare and Yahoyah payloads and found 42 samples which either matched unique behaviors, the unique PIVY mutex or had common C2 infrastructure.  The hashes of all the samples found are given in the appendix section at the end of this blog.

Figure 4 below shows the compilation timestamps of the payload samples found using AutoFocus. Given some of the payloads that were used in recent attacks, which were compiled months before, it shows that the threat actor group continues to reuse the payload within their exploit documents.

The below Maltego graph shows some of the shared infrastructure which have been used by Tropic Trooper. The complete list of indicators on the graph can also be found in the appendix section of this report. 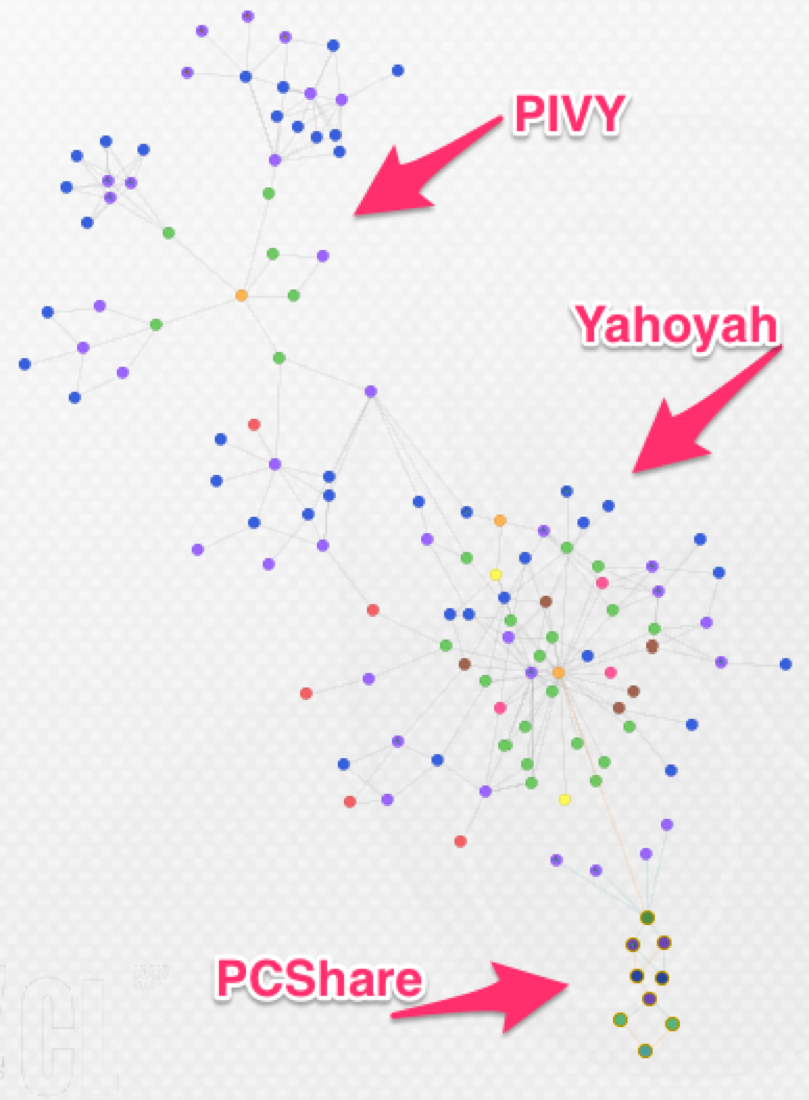 The Tropic Trooper threat actor group has been known to target governments and organizations in the Asia Pacific region for at least six years. In addition to using Yahoyah malware, we were able to confirm they are also using Poison Ivy and possibly PCShare malware families.  They are also still exploiting CVE 2012-0158, as are many threat actors. Palo Alto Networks customers are protected from Tropic Trooper’s malicious activities by:

Samples matching unique indicators, behaviors and C2 infrastructure from the payload extracted out of the malicious documents: