Actors related to the Operation Lotus Blossom campaign continue their attack campaigns in the Asia Pacific region. It appears that these threat actors have begun using Palo Alto Networks upcoming Cyber Security Summit hosted on November 3, 2016 in Jakarta, Indonesia as a lure to compromise targeted individuals. The payload installed in attacks using this lure is a variant of the Emissary Trojan that we have analyzed in the past, which has direct links to threat actors associated with Operation Lotus Blossom.

As our readers and customers in Indonesia are likely recipients of this phishing e-mail, we want to release some key facts to clarify the situation.

Palo Alto Networks hosts cyber security summits all over the world, and in many cases we send invitations via email to individuals we believe would be interested in attending. Figure 1 shows a legitimate invitation email in our most recent batch of invitations that has an image for its message body. 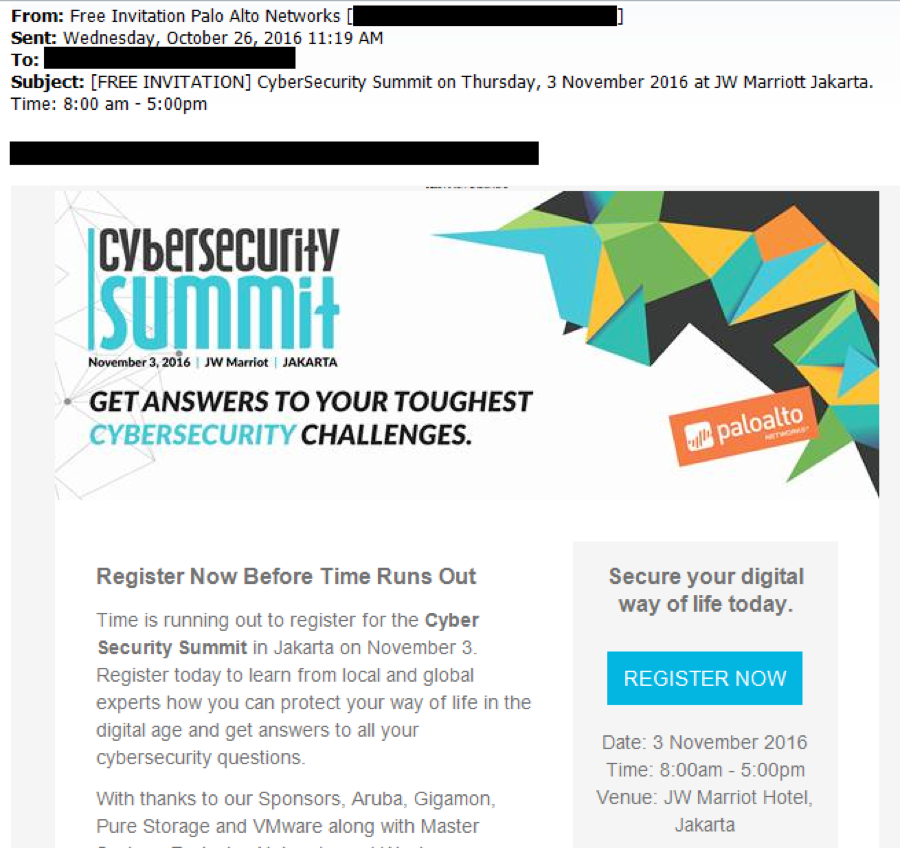 We received a tip (thanks Marcus!) regarding a recent delivery document that we believe was attached to spear-phishing emails sent to individuals that would likely be interested in attending our conference. While we do not have detailed targeting information or access to the attack emails, we believe the malicious document was delivered as an email attachment with a filename of “[FREE INVITATIONS] CyberSecurity Summit.doc”. This file name contains the first portion of the subject of the legitimate invitation emails we sent out, suggesting the Operation Lotus Blossom actor had access to an inbox that received the invite email or received the email themselves. 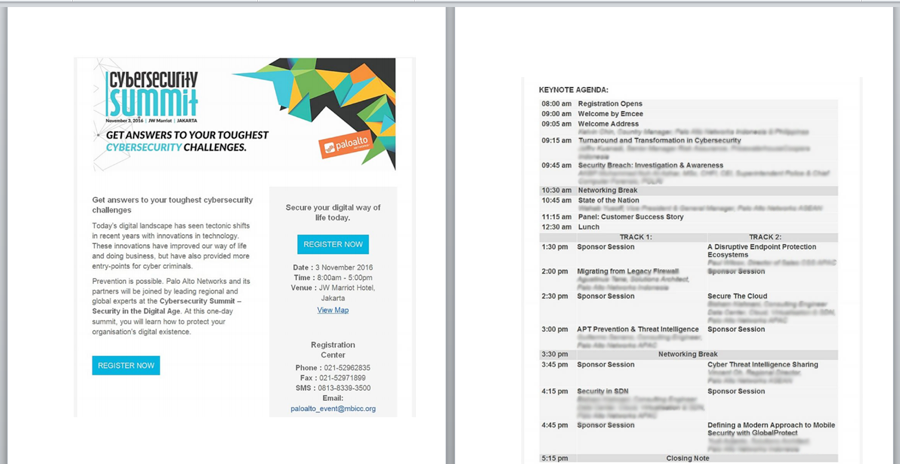 The payload associated with this attack is installed in the background while the decoy document is displayed. The payload itself is a variant of the Emissary Trojan that we have discussed in our blogs titled “Attack on French Diplomat Linked to Operation Lotus Blossom” and “Emissary Trojan Changelog: Did Operation Lotus Blossom Cause It to Evolve?”. The payload runs each time the operating system starts up thanks to the following registry key:

The Emissary payload is comprised of the following three files:

We decrypted the CVNX044.DAT file and found the following configuration for this Emissary payload:

This version of Emissary attempts to obtain the external IP address of the compromised system using the website “b4secure[.]com”. Figure 3 shows this HTTP GET request issued by Emissary to obtain the systems IP.

Figure 3 Emissary version 6.4 issues an HTTP GET request to b4secure[.]com to obtain an IP address for the compromised system

The Emissary payload will communicate with the C2 server from its configuration file using HTTP GET requests. These requests will an added “MSG” field that contains the configuration values in encrypted and base64 encode form, along with the a custom “Cookie” field. Figure 4 shows an example C2 beacon from Emissary version 6.4, with the MSG field and the Cookie containing the GUID from the configuration, a field “fun” that specifies which function within Emissary issued the request and the system’s IP address. 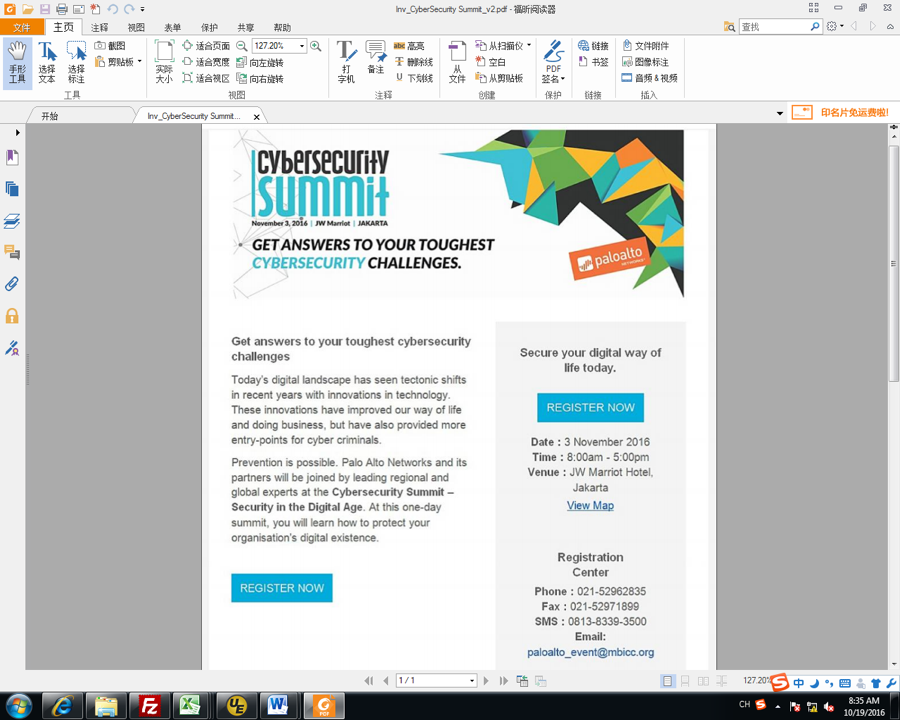 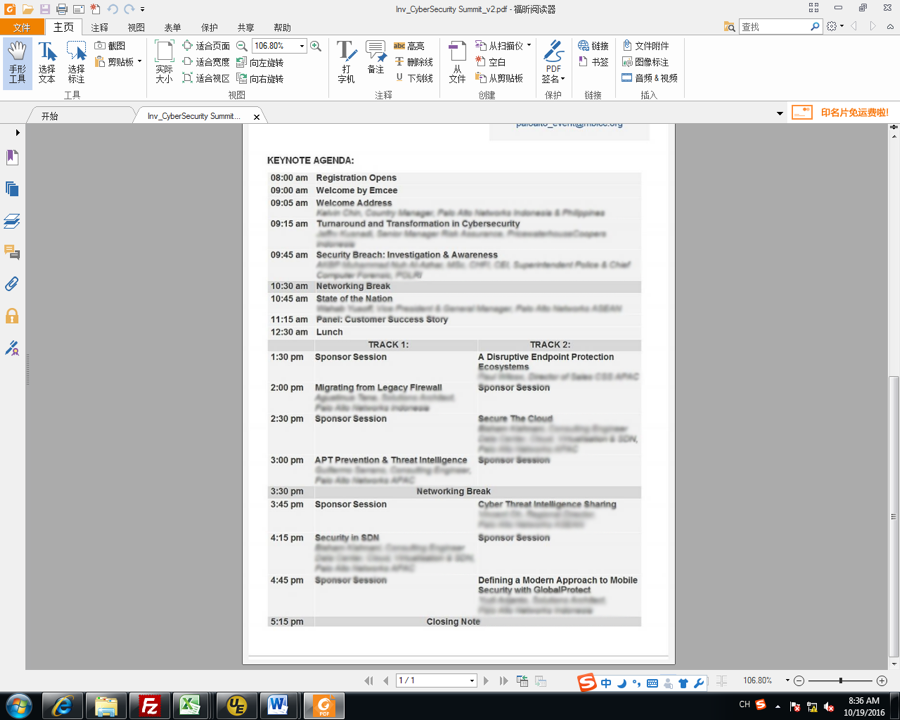 As you can see from the screenshots above, the threat actor is running Windows localized for Chinese users, which suggests the actor’s primary language is Chinese. The “CH” icon in the Windows tray shows that the built-in Windows input method editor (IME) is currently set to Chinese. Also, the screenshot shows a popular application in China called Sogou Pinyin, which is an IME that allows a user to type Chinese characters using Pinyin. Pinyin is critical to be able to type Chinese characters using a standard Latin alphabet keyboard, further suggesting the threat actor speaks Chinese.

Another interesting observation is the clock in the bottom right corner of the screenshots, which suggest that the threat actor took these screenshots at a local time of 8:35 and 8:36 AM on October 19, 2016. The decoy document was created on October 19, 2016 at 7:51 AM, but this timestamp is in UTC not local time. Obviously the screenshots could not have been taken in the future, suggesting that the actor is at least in UTC+1 or greater. We can speculate that if the actor’s clock was set to China Standard Time (UTC+8), then it would suggest that the final decoy document was created 7 hours and 15 minutes after the screenshots were taken.

Threat actors associated with Operation Lotus Blossom continue to carry out attack campaigns, which in this case involved a lure associated with a conference hosted by Palo Alto Networks. We have used emails to invite individuals to this conference; however, our legitimate invitation emails contained an image within the body of the email and did not contain any attachments. We have halted our invitation emails, but recipients of previous and future related emails should scrutinize them to determine if they were sent by these threat actors.

We have published a lot of content on the threat group involved and Emissary payload used in this attack. The payload installed appears to be a relatively new version of Emissary, specifically version 6.4. The decoy document itself contained cropped images of a screenshot that allowed us to determine the threat actor speaks Chinese as their primary language.

Lastly, if you received a malicious email that has an attachment named “[FREE INVITATIONS] CyberSecurity Summit.doc”, please check the system that accessed that file for the indicators of compromise listed at the bottom of this blog. For those individuals wishing to attend the conference, please register on our official CYBERSECURITY SUMMIT – JAKARTA website.