The “Tick” group has conducted cyber espionage attacks against organizations in the Republic of Korea and Japan for several years. The group focuses on companies that have intellectual property or sensitive information like those in the Defense and High-Tech industries. The group is known to use custom malware called Daserf, but also employs multiple commodity and custom tools, exploit vulnerabilities, and use social engineering techniques.

Regarding the command and control (C2) infrastructure, Tick previously used domains registered through privacy protection services to keep their anonymity, but have moved to compromised websites in recent attacks. With multiple tools and anonymous infrastructure, they are running longstanding and persistent attack campaigns. We have observed that the adversary has repeatedly attacked a high-profile target in Japan using multiple malware families for the last three years.

Symantec was first to publicly report on Tick, followed by LAC in 2016. These reports discussed the group’s malware, Daserf (a.k.a Muirim or Nioupale) and some additional downloader programs. Though Daserf wasn't a popular attack tool at the time of publishing the two reports, it dates back to at least 2011. Using AutoFocus, we were able to identify the link among Daserf and two other threats, 9002 and Invader. These threats shared infrastructure between July 2012 and April 2013.

Invader (a.k.a Kickesgo) is a backdoor that injects its main code into a legitimate process, such as explorer.exe, and has following functions:

9002 is the infamous RAT frequently seen in targeted attacks reported by various security vendors, including Palo Alto Networks. Interestingly, the C2 servers linking 9002 to Daserf were described in the report of an Adobe Flash Zero-day attack from FireEye in 2013. These domains were registered through the privacy protection services in 2008 and 2011.

Though we don't know the targets of these malware samples at the time of writing this article, we suspect the same group is behind these threats for a number of reasons. The samples of Daserf that shared infrastructure were submitted to VirusTotal only from Japan multiple times in 2013. As noted in a later section, another Invader sample shared different C2 servers with Daserf. Symantec reported that Tick exploited additional Adobe Flash and Microsoft Office vulnerabilities. SecureWorks said the adversary group is abusing a previously undisclosed vulnerability in Japanese Software Asset Management system on endpoints. Therefore, Tick or their digital quartermaster is capable of deploying new and unique exploits.

In July 2016, we identified a compromised website in Japan that was hosting a Daserf variant. The web server was also a C2 server for another threat, Minzen (a.k.a, XXMM, Wali, or ShadowWali). The threat often uses compromised web servers in Japan and the Republic of Korea.

As Kaspersky and Cybereason recently posted, Minzen is a modular malware that has both 32-bit and 64-bit components in its resource section or configuration data in its body. One of the Minzen samples (SHA256: 9374040a9e2f47f7037edaac19f21ff1ef6a999ff98c306504f89a37196074a2) found in the Republic of Korea in December 2016 installs simple backdoor module as a final payload on a compromised computer. It opens a TCP port and receives commands from a remote attacker. According to the debug path in the body, the author of the tool called it "NamelessHdoor," and its internal version is identified as “V1.5.”

Figure 2 Debug path left in the backdoor module in Minzen

The payload is based on "Nameless Backdoor" which has been publicly available for more than ten years. The oldest code we could identify was hosted on a famous Chinese source code sharing site since 2005. The author of the NamelessHdoor appears to have created additional versions of the Nameless Backdoor by removing unnecessary functions, and added open-source DLL injection code from ReflectiveDLLLoader. 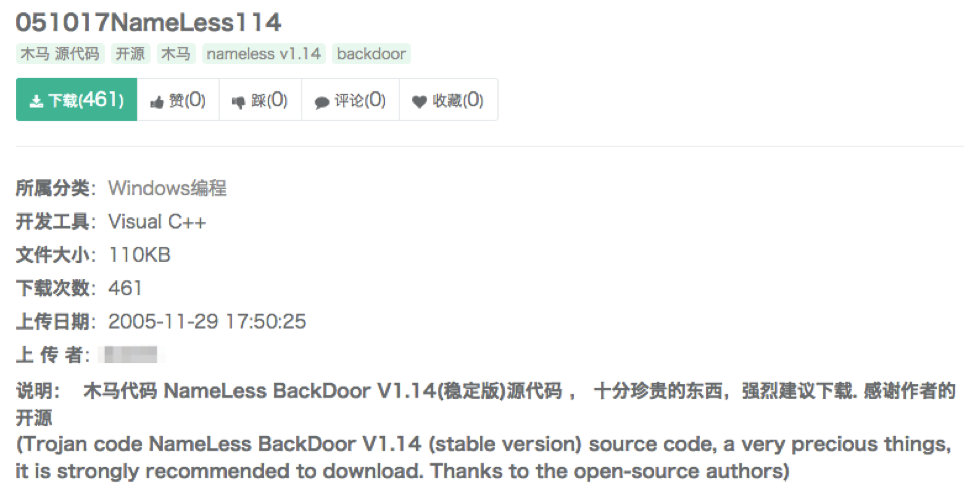 There is minimal public information regarding the Nameless Backdoor, except for the interesting report from Cyphort in 2015. The researcher of the company analyzed multiple threats, including Invader, Nioupale(Daserf) and Hdoor found in an attack against an Asian financial institution. We examined the sample described in the report as Hdoor and found it's a previous version of the NamelessHdoor we discovered in the Minzen sample, but without support for DLL injection.

Other interesting samples in the report are dllhost.exe and Shell64.dll. We don't have the same files but found possible variants close to their description in the article. These include the following:

It turned out that the DLL files we found are a custom variant of Gh0st RAT, and the EXE files download the RAT. Since the source code is publicly available, Gh0st RAT has been used by multiple actors for years.

In addition to the infrastructure, the attacker also shared code. The Gh0st downloaders employ simple substitution ciphers for hiding strings.

The cipher converts one character to another based on a substitution table, which can be seen below. As an example, the character 'K' in plain text is changed to '5' in cipher text, 'h' is converted to 'j' and so on. The string 'connect' was encoded to 'zF((0za' using this table.

The following Python script can decipher the encoded string.

The exact same table for simple substitution cipher is used in a variant of Daserf (SHA256: 01d681c51ad0c7c3d4b320973c61c28a353624ac665fd390553b364d17911f46). We also found a very similar table in other Tick tools. Since the strings are unique to these threats, we believe a developer linked to the group built these tools. Because of the shared domains and code, we believe the incident reported by Cyphort have ties to Tick. The following tables were identified for their associated malware samples:

We also identified another malware family, HomamDownloader, sharing some servers with Daserf. An overview of the connections among these threats is discussed in below.

Figure 6 Links among threats and servers

HomamDownloader is a small downloader program with minimal interesting characteristics from a technical point of view. HomamDownloader was discovered to be delivered by Tick via a spearphishing email. The adversary crafted credible email and attachment after understanding the targets and their behavior.

The email below was sent from a personal email account with a subject line of “New Year Wishes on January 1st”. The message asked the recipient to rename the attachment extension from “._X_” to “.exe” and opening it with the password specified in the email to view the Happy New Year eCard in the correct and polite language. 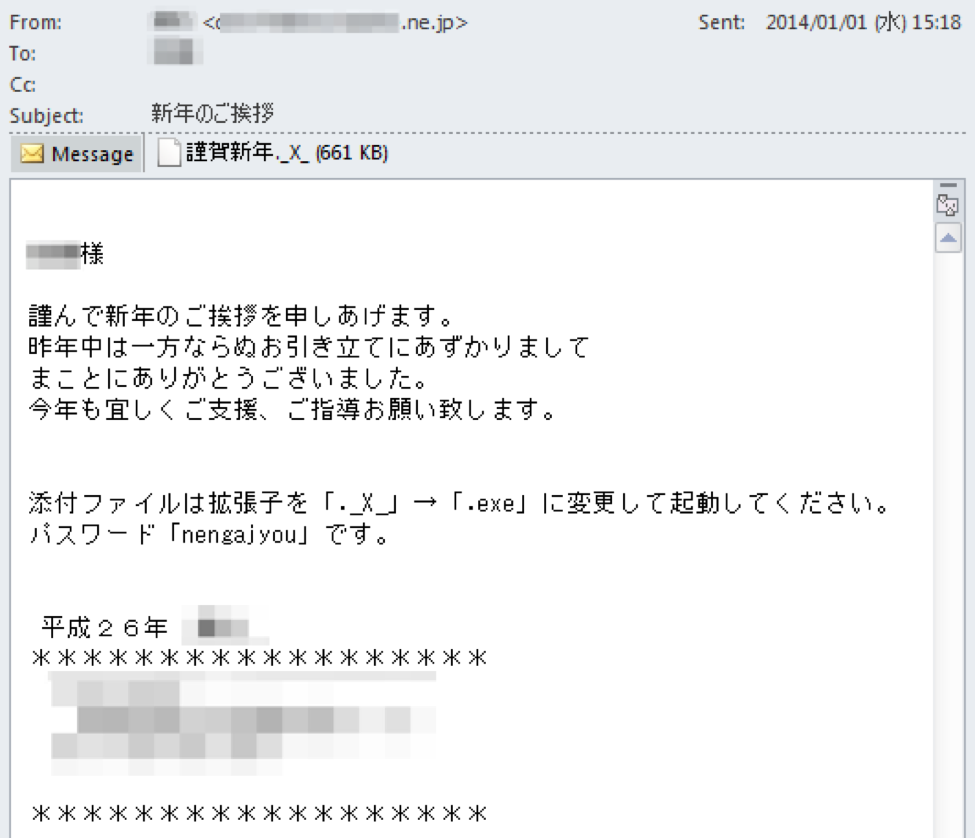 The image above is translated to the following in English:

Heartfelt Greetings for the New Year.
Thank you very much for your support over the past year.
I will greatly appreciate your further guidance and encouragement.

Would you please change the file extension of the attachment from "._X_" to ".exe" and open it?
Password is "nengajyo".

For those who are not familiar with Japanese companies, the email must look suspicious, especially given that the executable file attachment has the incorrect file extension. However, this may look legitimate in some cases. Many Japanese companies introduced a file encryption system for secure data exchange over email. The system encrypts documents with a user-specified password and often creates a self-extracting (SFX) file for ease of decrypting the file to recipients. When sending the SFX file with a password by email, senders usually rename the file extension from .exe to something else to avoid blocking or detecting the attachment by an email gateway or security product. The adversary may know Japanese enterprise users exchange these emails in such a way and crafts the spearphishing email in the same manner.

In addition to the social engineering email technique, the attacker also employs a trick to the attachment. The actor embedded malicious code to a resource section of the legitimate SFX file created by a file encryption tool, and modified the entry point of the program for jumping to the malicious code soon after the SFX program starts. The malicious code drops HomamDownloader, then jumps back to the regular flow in the CODE section, which in turn asks the user the password and decrypts the file. Therefore, once a user executes the attachment and sees the password dialog on SFX, the downloader dropped by the malicious code starts working even if the user chooses the Cancel on the password window. Should the user become aware of the infection later, it may be difficult to find the cause due to the fact that the original embedded file contained within the SFX is benign. 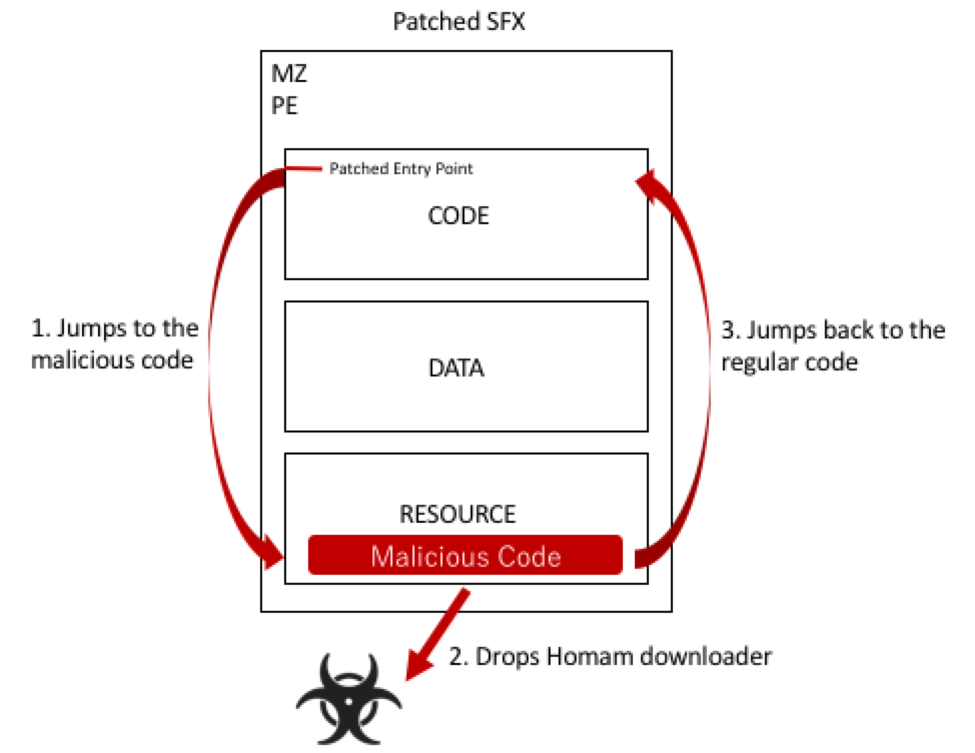 Tick was spotted last year, but they are actively and silently attacking various organizations in South Korea and Japan for a number of years. While some of the group’s tools, tactics, and procedures (TTPs) have been covered within this article, it is likely there is much that still remains uncovered.

Palo Alto Networks customers are protected by these threats in the following ways: