Our Unit 42 research team routinely evaluates the data from our Email Link Analysis (ELINK) system. In examining the data we collect, which includes URLs extracted from emails or submitted by API, we can identify patterns and trends which helps us discern prevalent web threats. This blog is the fifth installment in a series of posts tracking web-based threats over time, specifically, statistics pertaining to malicious URLs, domains, exploit kits, vulnerabilities, and phishing scams.

We observed a significant decrease in the activity of the Fallout exploit kit in the first quarter of 2019 while at the same time observing an increase in activity of the Kaixin exploit kit in the second quarter. Kaixin is primarily observed hosted in China and with the increased popularity of Kaixin activities, our data showed China as hosting the largest proportion of malware domains for the first time since we have been collecting this data.

Servers in the US continues to be the most voluminous in terms of hosting phishing domains, which are often disguised as legitimate websites to obtain sensitive information. Popular service providers for cloud based services (e.g., OneDrive, Office 365 and Google drive) are still the most often imitated by phishing webpages.

The statistics of the URLs presented in this blog are from ELINK system, which is a subset of all the URLs covered by PANDB and WildFire. 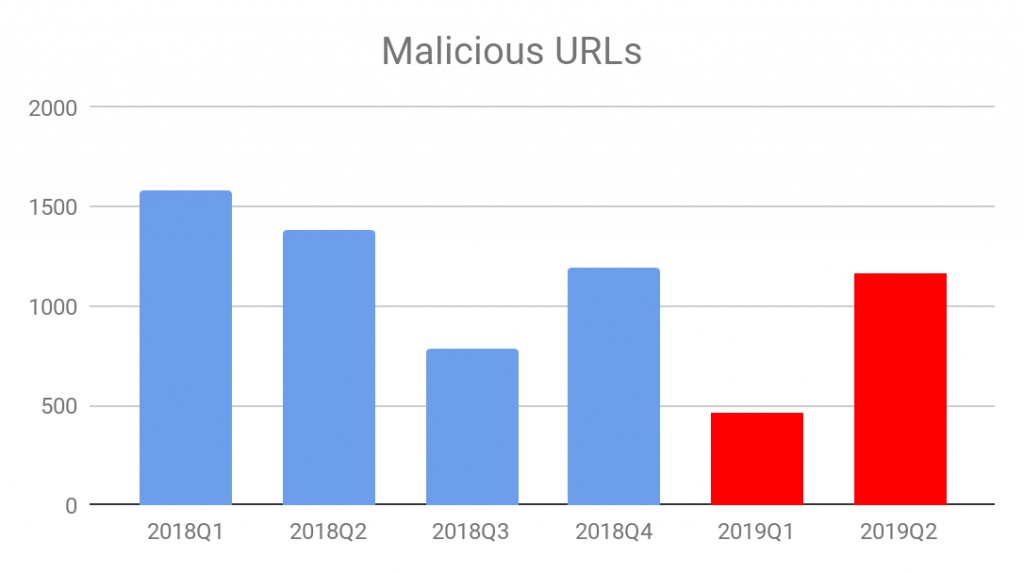 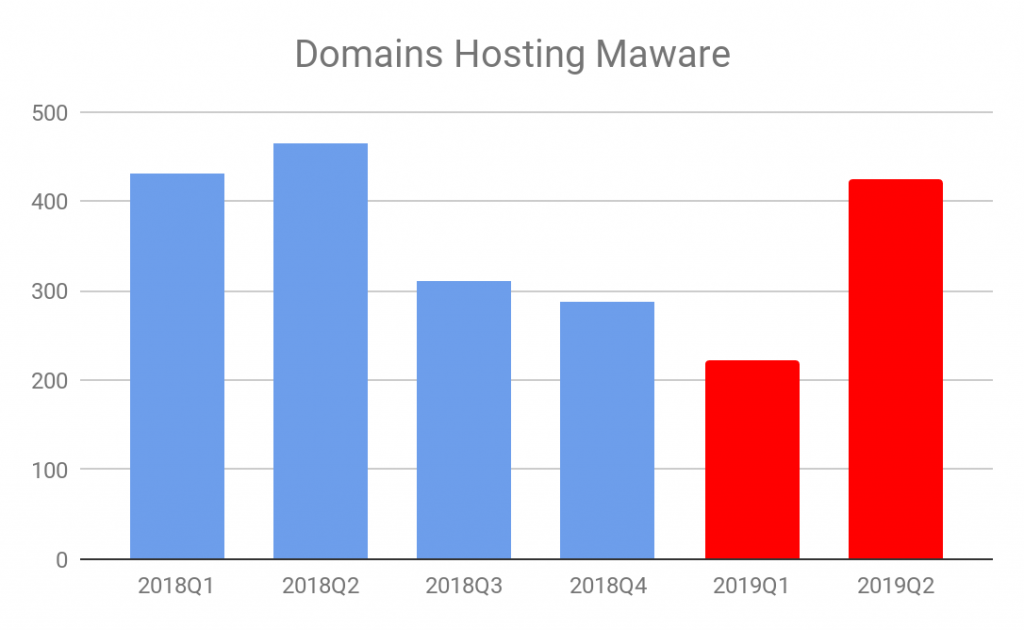 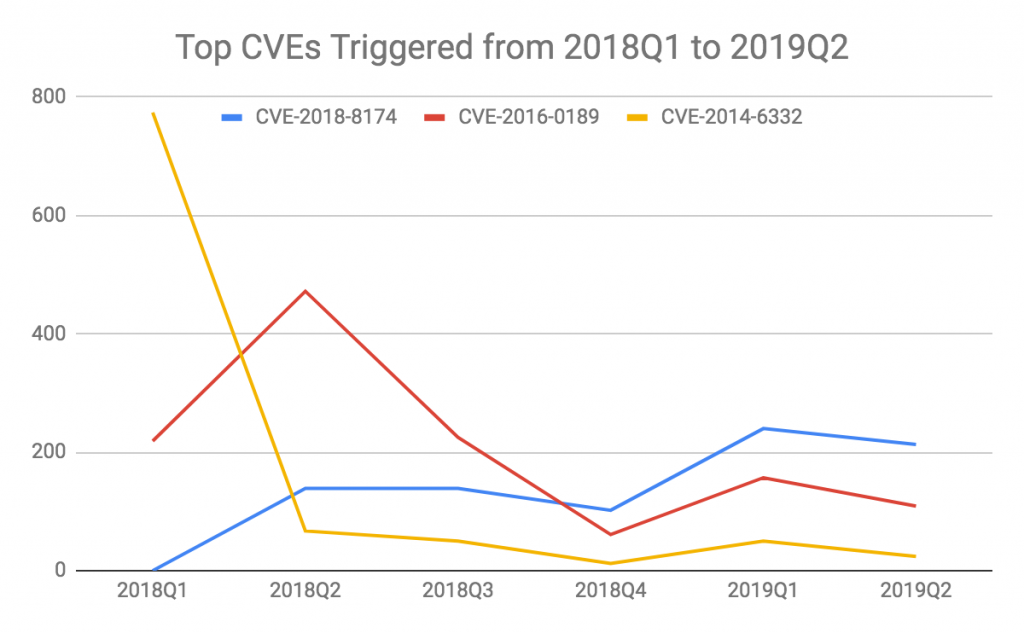 Below is the overview of the vulnerabilities that we observed were commonly exploited in 2019:

CVE-2008-4844: Use-after-free vulnerability in the CRecordInstance::TransferToDestination function in mshtml.dll in Microsoft Internet Explorer 5.01, 6, 6 SP1, and 7 allows remote attackers to execute arbitrary code via DSO bindings involving (1) an XML Island, (2) XML DSOs, or (3) Tabular Data Control (TDC) in a crafted HTML or XML document, as demonstrated by nested SPAN or MARQUEE elements, and exploited in the wild in December 2008.

CVE-2009-0075：Microsoft Internet Explorer 7 does not properly handle errors during attempted access to deleted objects, which allows remote attackers to execute arbitrary code via a crafted HTML document, related to CFunctionPointer and the appending of document objects, aka “Uninitialized Memory Corruption Vulnerability.”

CVE-2010-0806：Use-after-free vulnerability in the Peer Objects component (aka iepeers.dll) in Microsoft Internet Explorer 6, 6 SP1, and 7 allows remote attackers to execute arbitrary code via vectors involving access to an invalid pointer after the deletion of an object, as exploited in the wild in March 2010, aka “Uninitialized Memory Corruption Vulnerability.”

CVE-2012-1889：Microsoft XML Core Services 3.0, 4.0, 5.0, and 6.0 accesses uninitialized memory locations, which allows remote attackers to execute arbitrary code or cause a denial of service (memory corruption) via a crafted web site.

CVE-2016-0189：The MicrosoftJScript 5.8 and VBScript 5.7 and 5.8 engines, as used in Internet Explorer 9 through 11 and other products, allow remote attackers to execute arbitrary code or cause a denial of service (memory corruption) via a crafted web site, aka “Scripting Engine Memory Corruption Vulnerability,” a different vulnerability than CVE-2016-0187.

In previous sections, we have summarized the behaviors of the URLs we have crawled and analyzed. Beside proactively analyzing websites and blocking detected malicious urls, we also block visits to malicious websites based on these websites’ web content when their URLs have never been analyzed by us before. The figure below presents the scaled number of blocked visits to new malicious websites from August 2018 to June 2019. Compared to Q4 of 2018, where the most common malicious websites that were visited/blocked by are with Angler Exploit Kit, in the first half-year of 2019, the exploit kits we observed were more diverse with more activities from Kaixin, Rig and Novidade. 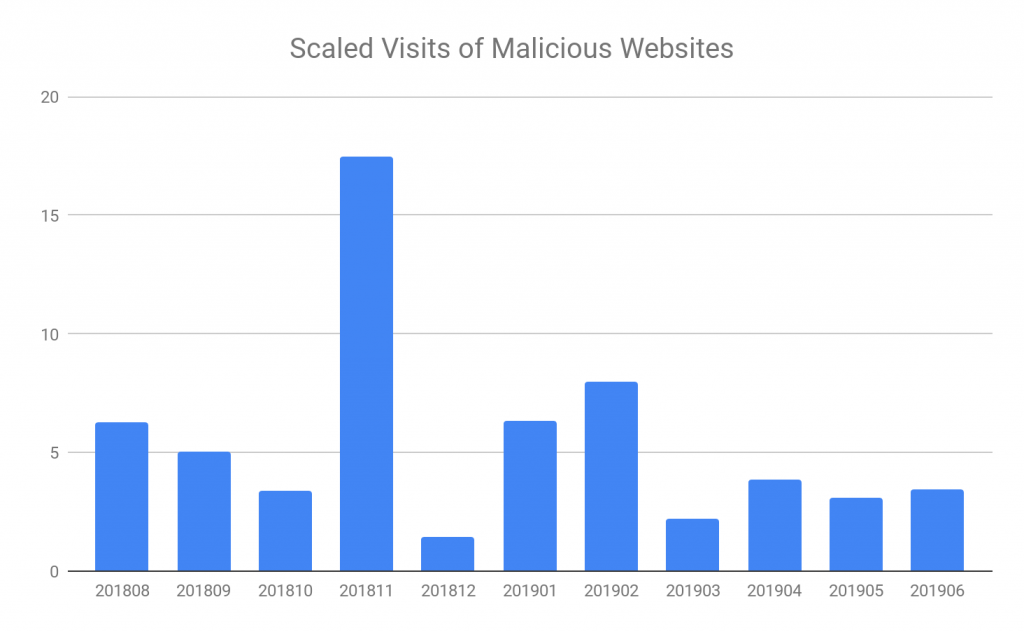 Since phishing detection was introduced in ELINK at the end of Q3 of 2018, ELINK has detected around 430,000 credential harvesting phishing URLs from emails and API submissions. The largest number of detections occurred in 2018 Q4 and we saw a decline in Q1 of 2019, but a comeback in Q2. 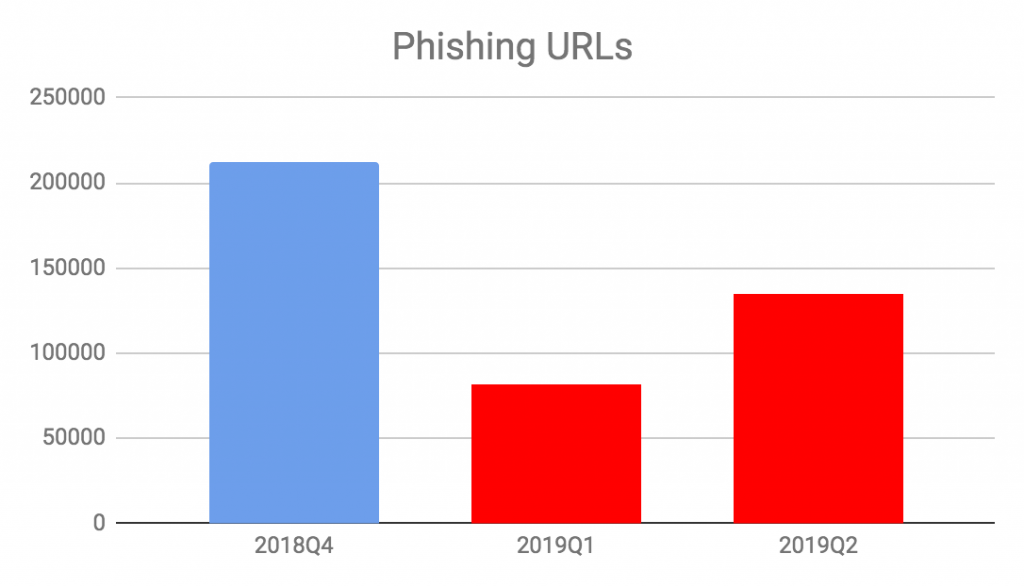 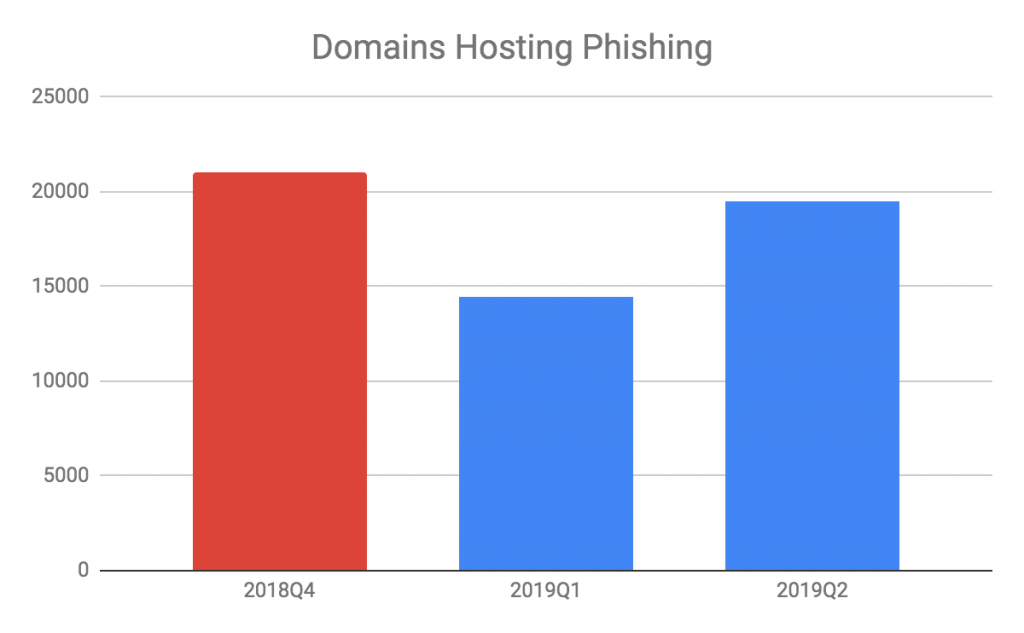 By comparing the distribution of phishing domains with that of malware, we find that attackers prefer hosting malware in China and Russia. The United States, however, is more popular for hosting phishing domains, with over 100 times as many domains hosted compared to Russia or China.

For each of the phishing URLs detected, we identify the industry that is mimicked by phishing page. In Figure 9 we show how these break down across the past three quarters. The Technology industry (e.g. Microsoft, Apple, Google) continues to be the most popularly imitated, making up over 60% of all phishing URLs. Compared with Q4 of 2018, logistics (e.g., DHL) overtakes banking and financial industries and ranks #2 in Q2 of 2019. Gaming (e,g, battle.net) and telecom (e.g., AT&T) became less popular in 2019 while we saw more imitation of Linkedin and Facebook websites this year. 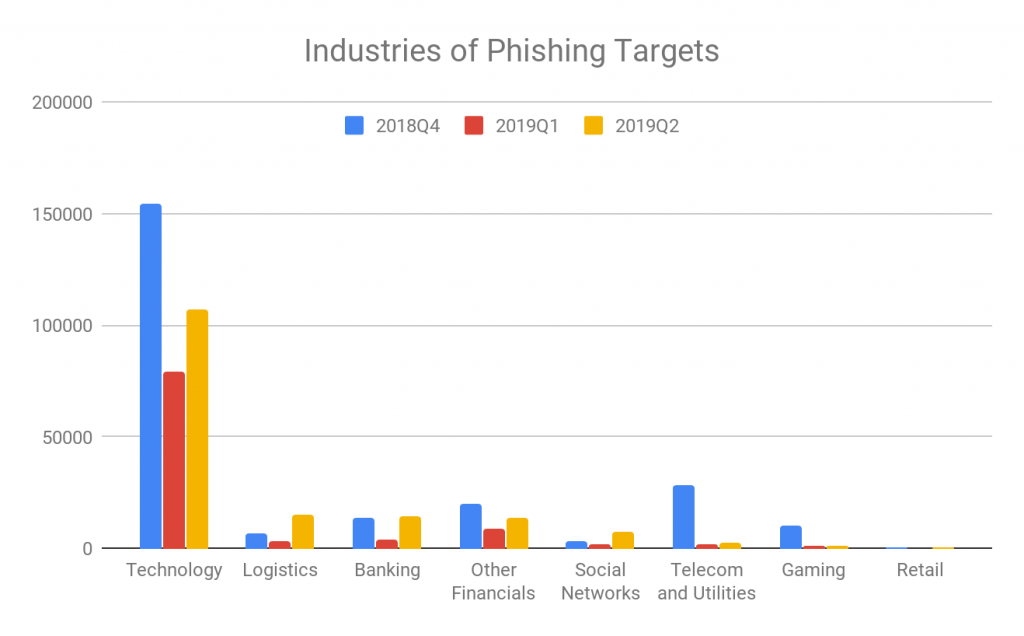 Similar to malicious websites visits, we also track the trend of how many new phishing websites are visited/blocked each month from October 2018 to June 2019. The figure below presents the statistics of the blocked visits to new phishing websites, which our ELINK system had not already analyzed. 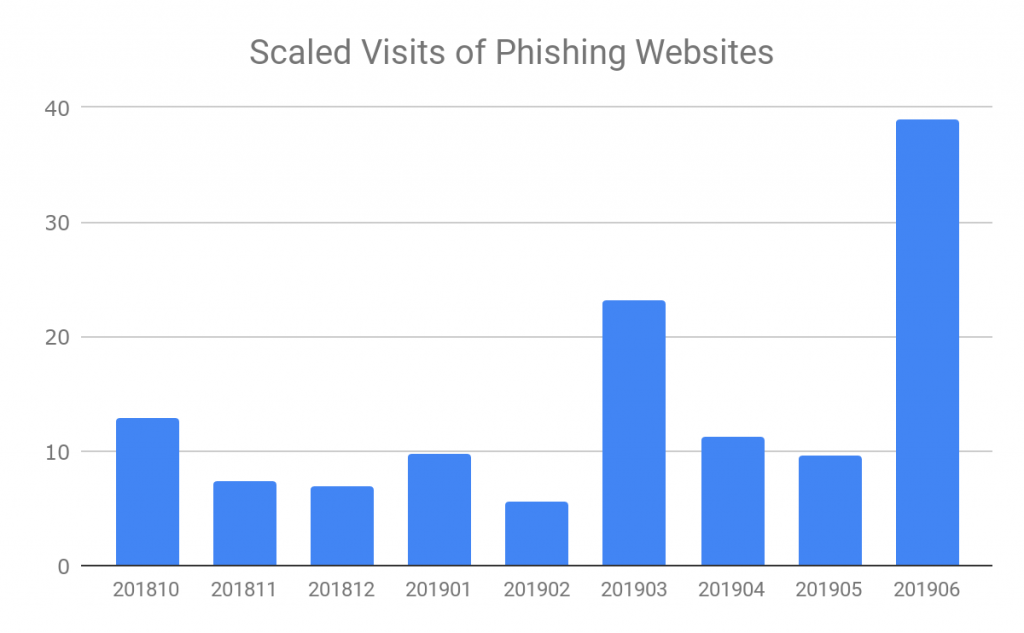 Looking at the trend of the first half-year of 2019, we see a big reduction of both malware and phishing in Q1, followed by an increase in Q2. The United States remains the top hosting country/region for malicious and phishing domains.

Our ELINK system still observes 10-year-old vulnerabilities being exploited in the wild. However, the majority of the vulnerabilities observed were discovered within the last 5 years. WildFire and PanDB both have full coverage of these malicious URLs and samples.

Compared to malicious content, phishing is more popular for attackers. It is getting harder to compromise browsers or operating systems with software or system vulnerabilities. Compared to a system or a browser exploit, credential harvesting via phishing attacks may be more effective for an adversary to complete their objective. WildFire and PANDB both have full coverage of these phishing URLs.