Lately, I’ve been investing time into auditing packet sockets source code in the Linux kernel. This led me to the discovery of CVE-2020-14386, a memory corruption vulnerability in the Linux kernel. Such a vulnerability can be used to escalate privileges from an unprivileged user into the root user on a Linux system. In this blog, I will provide a technical walkthrough of the vulnerability, how it can be exploited and how Palo Alto Networks customers are protected.

A few years ago, several vulnerabilities were discovered in packet sockets (CVE-2017-7308 and CVE-2016-8655), and there are some publications, such as this one in the Project Zero blog and this in Openwall, which give some overview of the main functionality.

Specifically, in order for the vulnerability to be triggerable, we need the kernel to have AF_PACKET sockets enabled (CONFIG_PACKET=y) and the CAP_NET_RAW privilege for the triggering process, which can be obtained in an unprivileged user namespace if user namespaces are enabled (CONFIG_USER_NS=y) and accessible to unprivileged users. Surprisingly, this long list of constraints is satisfied by default in some distributions, like Ubuntu.

Palo Alto Networks Cortex XDR customers can prevent this bug with a combination of the Behavioral Threat Protection (BTP) feature and Local Privilege Escalation Protection module, which monitor malicious behaviors across a sequence of events, and immediately terminate the attack when it is detected.

(All of the code figures on this section are from the 5.7 kernel sources.)

Due to the fact that the implementation of AF_PACKET sockets was covered in-depth in the Project Zero blog, I will omit some details that were already described in that article (such as the relation between frames and blocks) and go directly into describing the vulnerability and its root cause.

The bug stems from an arithmetic issue that leads to memory corruption. The issue lies in the tpacket_rcv function, located in (net/packet/af_packet.c) .

The arithmetic bug was introduced on July 19, 2008, in the commit 8913336 (“packet: add PACKET_RESERVE sockopt”). However, it became triggerable for memory corruption only in February 2016, in the commit 58d19b19cd99 ("packet: vnet_hdr support for tpacket_rcv"). There were some attempts to fix it, such as commit bcc536 (“net/packet: fix overflow in check for tp_reserve”) in May 2017 and commit edb58be (“packet: Don't write vnet header beyond end of buffer”) in August 2017. However, those fixes were not enough to prevent memory corruption.

The headroom that is mentioned in the manual is simply a buffer with size specified by the user, which will be allocated before the actual data of every packet received on the ring buffer. This value can be set from user-space via the setsockopt system call.

As we can see in Figure 1, initially, there is a check that the value is smaller than INT_MAX. This check was added in this patch to prevent an overflow in the calculation of the minimum frame size in packet_set_ring. Later, it’s verified that pages were not allocated for the receive/transmit ring buffer. This is done to prevent inconsistency between the tp_reserve field and the ring buffer itself.

After setting the value of tp_reserve, we can trigger allocation of the ring buffer itself via the setsockopt system call with optname of PACKET_RX_RING:

This is implemented in the packet_set_ring function. Initially, before the ring buffer is allocated, there are several arithmetic checks on the tpacket_req structure received from user-space:

Figure 3. Part of the sanity checks in the packet_set_ring function.

As we can see in Figure 3, first, the minimum frame size is calculated, and then it is verified versus the value received from user-space. This check ensures that there is space in each frame for the tpacket header structure (for its corresponding version) and tp_reserve number of bytes.

Later, after doing all the sanity checks, the ring buffer itself is allocated via a call to alloc_pg_vec:

As we can see from the figure above, the block size is controlled from user-space. The alloc_pg_vec function allocates the pg_vec array and then allocates each block via the alloc_one_pg_vec_page function:

The alloc_one_pg_vec_page function uses __get_free_pages in order to allocate the block pages:

When a packet is received on the interface, the socket bound to the tpacket_rcv function will be called and the packet data, along with the TPACKET metadata, will be written into the ring buffer. In a real application, such as tcpdump, this buffer is mmap’d to the user-space and packet data can be read from it.

Figure 7. The arithmetic calculation in tpacket_rcv

Initially, I thought it might be possible to use the overflow in order to make netoff a small value, so macoff could receive a larger value (from the underflow) than the size of a block and write beyond the bounds of the buffer.

However, this is prevented by the following check:

Figure 9. Another arithmetic check in the tpacket_rcv function.

This check is not sufficient to prevent memory corruption, as we can still make macoff a small integer value by overflowing netoff. Specifically, we can make macoff smaller than sizeof(struct virtio_net_hdr), which is 10 bytes, and write behind the bounds of the buffer using virtio_net_hdr_from_skb.

By controlling the value of macoff, we can initialize the virtio_net_hdr structure in a controlled offset of up to 10 bytes behind the ring buffer. The virtio_net_hdr_from_skb function starts by zeroing out the entire struct and then initializing some fields within the struct based on the skb structure.

Figure 10. Implementation of the virtio_net_hdr_from_skb function.

However, we can set up the skb so only zeros will be written into the structure. This leaves us with the ability to zero 1-10 bytes behind a __get_free_pages allocation. Without doing any heap manipulation tactics, an immediate kernel crash will occur.

A POC code for triggering the vulnerability can be found in the following Openwall thread.

I submitted the following patch in order to fix the bug.

Figure 11. My proposed patch for the bug.

The idea is that if we change the type of netoff from unsigned short to unsigned int, we can check whether it exceeds USHRT_MAX, and if so, drop the packet and prevent further processing.

Our idea for exploitation is to convert the primitive to a use-after-free. For this, we thought about decrementing a reference count of some object. For example, if an object has a refcount value of 0x10001, the corruption would look as follows: 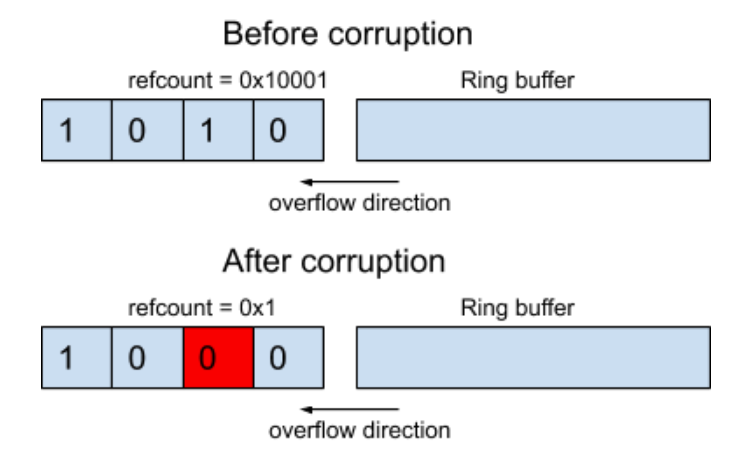 Figure 12. Zeroing out a byte in an object refcount.

As we can see in Figure 13 below, after corruption, the refcount will have a value of 0x1, so after releasing one reference, the object will be freed.

However, in order to make this happen, the following constraints have to be satisfied:

We used some grep expressions along with some manual analysis of code, and we came out with the following object:

Figure 13. Definition of the sctp_shared_key structure.

I was surprised that such simple arithmetic security issues still exist in the Linux kernel and haven’t been previously discovered. Also, unprivileged user namespaces expose a huge attack surface for local privilege escalation, so distributions should consider whether they should enable them or not.

Palo Alto Networks Cortex XDR stops threats on endpoints and coordinates enforcement with network and cloud security to prevent successful cyber attacks. To prevent the exploitation of this bug, the Behavioral Threat Protection (BTP) feature and Local Privilege Escalation Protection module in Cortex XDR would monitor malicious behaviors across a sequence of events and immediately terminate the attack when detected.