Summary
While investigating files uploaded to a TwoFace webshell, Unit 42 discovered actors installing an Internet Information Services (IIS) backdoor that we call RGDoor. Our data suggests that actors have deployed the RGDoor backdoor on webservers belonging to eight Middle Eastern government organizations, as well as one financial and one educational institution.
We believe the actors deploy RGDoor as a secondary backdoor to regain access to a compromised webserver in the event a victim organization detects and removes the TwoFace shell. We do not have HTTP logs that show the actor interacting with RGDoor, so we do not know the activities the actors carry out using the backdoor. However, we were able to create a client application to interact with RGDoor for testing purposes, which allowed us to interact with the backdoor to see how it operates on an IIS server.

Unlike TwoFace, the actors did not develop RGDoor in C# to be interacted with at specific URLs hosted by the targeted IIS web server. Instead, the developer created RGDoor using C++, which results in a compiled dynamic link library (DLL). The DLL has an exported function named "RegisterModule", which is important as it led us to believe that this DLL was used as a custom native-code HTTP module that the threat actor would load into IIS. Starting with IIS 7, developers could create modules in C++ that the IIS webserver would load to extend IIS' capabilities, such as carry out custom actions on requests. The fact that RGDoor is an IIS HTTP module suggests that there is no visual representation of the shell for actors to interact with, which also differs from TwoFace’s interface that actors can interact with by visiting the URL to the TwoFace ASPX file.
According to Microsoft’s documentation, native-code modules can be installed either in the IIS Manager GUI or via the command-line using the “appcmd” application. While we do not have logs to determine exactly how the actors install RGDoor, the actor can use the TwoFace webshell to install the RGDoor module via the command line. The following command could be used to install the HTTP module on an IIS server:
%systemroot%\system32\inetsrv\APPCMD.EXE install module /name:[module name] /image:[path to RGDoor DLL] /add:true
We confirmed the command above successfully installed the RGDoor backdoor in our test environment. Figure 1 shows the specific command we used to install RGDoor on our IIS server.

RGDoor is notified immediately when the IIS server receives an inbound HTTP POST request. RGDoor parses these POST requests, specifically looking for the HTTP “Cookie” field by accessing the HTTP header with the following function call:
pHttpContext->GetRequest()->GetHeader("Cookie",NULL)
After accessing the cookie field, RGDoor parses this field by looking for the string "RGSESSIONID=", which is the basis for the name RGDoor. If present, the code uses the two-bytes immediately following the "RGSESSIONID=" string as a decryption key, specifically treating the two character bytes as a single hexadecimal byte. For instance, the two-byte key of “00” would represent the hexadecimal value of 0x00, where “FF” would represent 0xff, and so on. The key is followed by a Base64 encoded string that contains ciphertext. The following represents the structure of the cookie filed in inbound RGDoor requests:
RGSESSIONID=[two-bytes for key][Base64 encoded ciphertext]
RGDoor decodes the Base64 encoded string and then decrypts the decoded string using a custom algorithm. The custom algorithm iterates through the ciphertext using the 'pxor' instruction to XOR each byte of ciphertext with the single-byte hexadecimal value from the two-byte character key provided in the cookie field.
The code will parse the cleartext looking for one of three commands: “cmd$”, “upload$” and “download$”. The code treats the string immediately following the command as the command’s argument. Table 1 provides the arguments and further details on the three commands.

Responding to Commands
When responding to inbound requests, the code will clear the response that IIS would have responded to the HTTP POST request by calling the following functions:
pHttpContext->GetResponse()->Clear()
RGDoor then constructs its own HTTP response by first setting the "Content-Type" field within the HTTP header to "text/plain". Figure 3 shows the code that uses the IHttpResponse::SetHeader method to set the “Content-Type” field within the HTTP response to “text/plain”, specifically by using a value of 0xC (0xA + 2) for the ulHeaderIndex within HTTP_HEADER_ID enumeration.

Interacting with RGDoor
We created a client application to interact with the RGDoor module, specifically to issue commands to the backdoor and to see how it operates on the IIS server. As mentioned previously in this blog, RGDoor has three available commands, specifically “cmd$”, “upload$” and “download$”. We used our client to issue one of each of these commands.
Figure 4 shows the HTTP request and response to our first interaction with the RGDoor module. The command issued in this request was “cmd$whoami”, which instructs RGDoor to run the ‘whoami’ command in command prompt. The key used to encrypt this command was “54” (0x54), which resulted in Base64 encoded string of “NzkwcCM8OzU5PQ==”. The HTTP response shows the RGDoor module returned the Base64 encoded string of “PT0ndDUkJCQ7OzgIMDEyNSE4IDUkJCQ7OzheVA==”, which when decrypted using the same “54” key is the result of the ‘whoami’ command, specifically the string “iis apppool\\defaultapppool\n\x00”.

Figure 5 shows our testing of RGDoor’s upload command, specifically “upload$c:\windows\temp\test.txt” that uploads a file from our local system to the webserver. The inbound request uses a key of “54” (0x54) that results in an encoded command string of “ISQ4OzUwcDduCCM9OjA7IycIIDE5JAggMScgeiAsIA=”. The request also includes the string “IDEnID06M2VmZ14=” within the POST data, which is the string “testing123\n” from the file on our local system encrypted using the “54” key that will be written to the “test.txt” file on the server. As you can see from the HTTP response, RGDoor responded to this command with “write done”, which is interesting as the response was in cleartext and not encrypted using the custom algorithm. 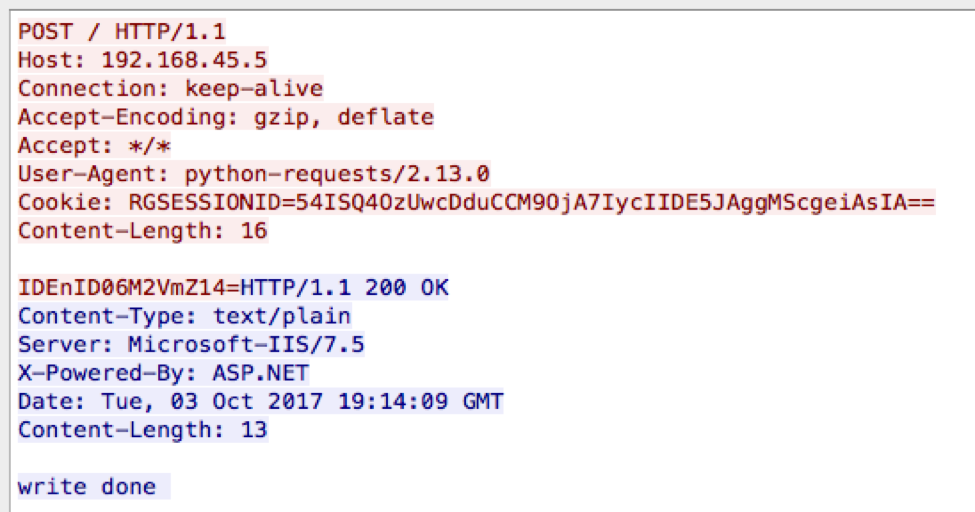 Figure 6 shows our testing of the download command within RGDoor, specifically a command “download$c:\windows\temp\test.txt” that downloads the file uploaded in our previous test. We chose to use the key “89” (0x89) in this test to showcase RGDoor’s ability to use any hexadecimal byte as a key, which resulted in an encoded command string of “7eb+5+Xm6O2t6rPV/uDn7eb++tX97OT51f3s+v2n/fH9”. RGDoor responds to this command with the encoded string “/ez6/eDn7ri7uoM=”, which when decrypted with the “89” key results in the string 'testing123\n', which is the contents of the “test.txt” file. 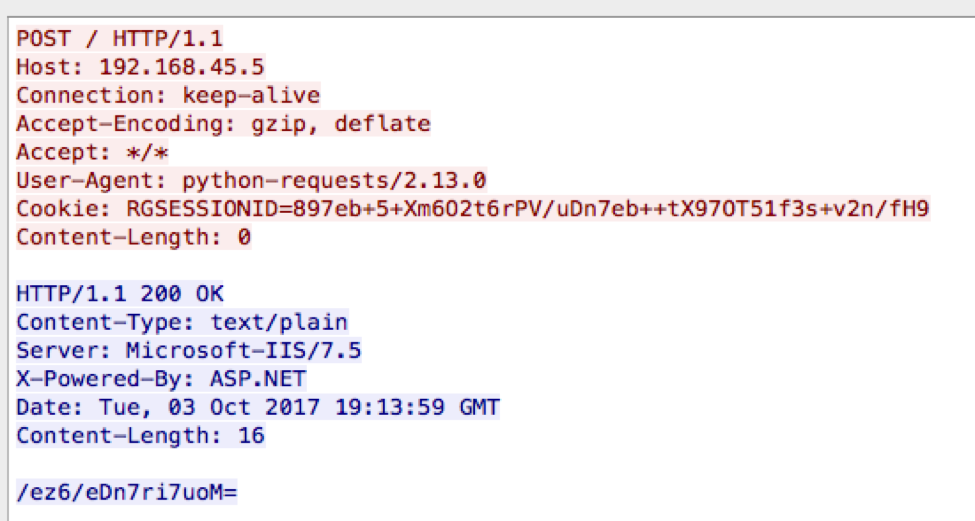 Figure 6 Downloading a file from the server via RGDoor

To determine how the RGDoor client requests appears within the IIS request logs, we checked the logs of our default IIS installation in our test environment. By default, IIS does not log the values within Cookie fields of inbound HTTP requests, which would contain commands issued by actors to RGDoor. To see inbound RGDoor requests, an administrator must configure logging of Cookie fields in IIS, which can be selected in the W3C Logging Fields dialog in IIS Manager, as seen in Figure 7. 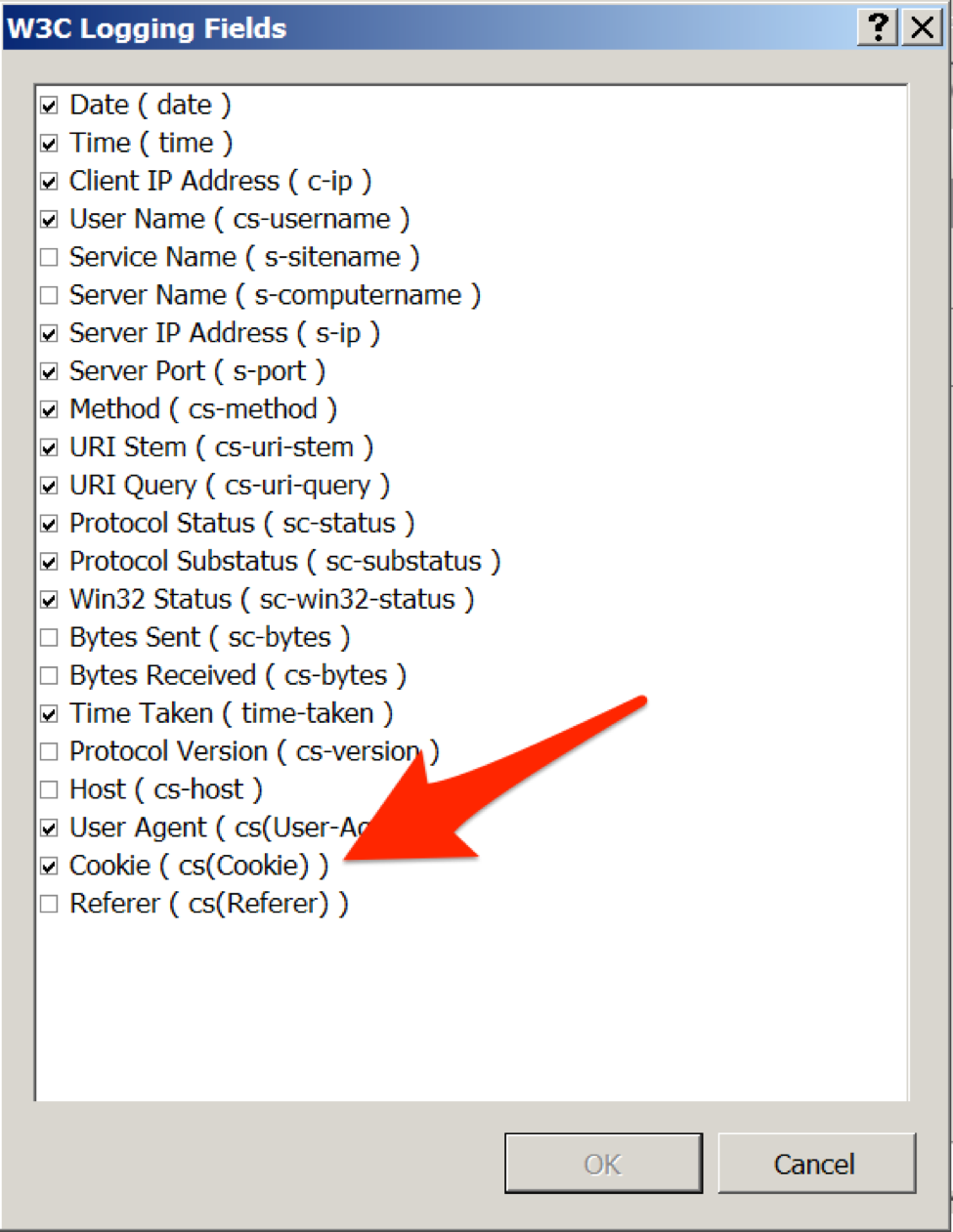 The HTTP requests sent by the client to the RGDoor backdoor in the testing above will generate logs on the IIS server. Without the Cookie field logged, it is difficult to locate and analyze inbound requests related to RGDoor. Remember that RGDoor is an IIS module that checks all inbound POST requests for commands, so an actor does not need to use one particular URL to interact with RGDoor. However, the following shows the IIS log generated from the first testing request we made using our RGDoor client, which shows the “RGSESSIONID=” string, the “54” key and the Base64 encoded command within the Cookie field:

Conclusion
RGDoor is an IIS backdoor that actors used the TwoFace webshell to load onto an IIS web server. The RGDoor provides backdoor access to the compromised server, which we speculate the actors loaded in order to regain access to the server in the event the TwoFace webshell was removed. This backdoor has a rather limited set of commands, however, the three commands provide plenty of functionality for a competent backdoor, as they allow an actor to upload and download files to the sever, as well as run commands via command prompt. The use of RGDoor suggests that this group has contingency plans to regain access to a compromised network in the event their webshells are discovered and remediated.
Palo Alto Networks customers are protected from RGDoor by the following: