PDF file format is quite rich. It allows you to render text, pictures, and even 3D objects. It also contains a JavaScript engine that renders scripts embedded within a document. Such scripts are used to create dynamic content that interacts with the user. Adobe’s JavaScript API manual documents most of the usable functions and global variables from such scripts.

There is a set of vulnerabilities called ‘JavaScript Privilege Escalation’. Such bugs allow JavaScript executing under nonprivileged context to run arbitrary scripts under privileged context and thus call any desired, secured function. Let’s look at an example of this scenario.

At this stage Adobe Reader executes all the JavaScript files located under the
C:\Program Files\Adobe\Reader 11.0\Reader\Javascripts directory. Unless some custom script or plugin is deployed, this directory should only include the JSByteCodeWin.bin file.

JSByteCodeWin.bin consists of SpiderMonkey 1.8 XDR bytecode. It can be decompiled using a tool written by Gabor Molnar, which is found in his github. By decompiling it you can see that Adobe implements many functions in JavaScript rather than native code. Since some of these functions need to execute secured functions, there is a need for some mechanism that allows it to execute them later on and not just in early/unique stages.

Adobe defines many functions as trusted functions at the Batch stage in JSByteCodeWin.bin, so they can later be called.

An example is the ANSendApprovalToAuthorEnabled function:

Being a trusted function doesn’t mean that its entire code executes under privileged context. This only means that the function can modify its context by calling app.beginPriv. Only code that executes in between app.beginPriv and app.endPriv block is privileged. Note that privileged context isn’t “passed down” between functions you call from within the beginPriv/endPriv block, and those will have to call app.beginPriv to raise their privilege level as well. If a function context was ended without decreasing the privilege level (by calling app.endPriv), it will automatically decrease at the end of its scope.

Imagine Adobe defines a trusted function at ‘Batch’ stage that looks like this:

That means it can later raise its context to privileged by calling app.beginPriv. The vulnerableFunc function accepts an argument, ‘doc’, which it assumes to be of type ‘Doc’ object.

Since there are no type-safety checks in JavaScript, an attacker can pass any object as a doc argument. This allows attackers to execute any secured function they desire by abusing the above code.

We create a new object named ‘fakeDoc’. We then set the member ‘displayText’ to reference some secured function we want to call. Then, we call ‘vulnerableFunc’ passing ‘fakeDoc’ as an argument.

In this example, we abused the fact that a trusted function receives a callback as an argument. But since JavaScript is a very dynamic language, there are many other cases in which callbacks are unintentionally called. Getters and setters functions can be defined, global variables can be overridden, and much more.

The approach Adobe takes to fix such vulnerabilities is to tweak the JavaScript engine to prevent specific behaviors. Examples include preventing the call to a privileged function from getters/setters, eval(), etc.

While manually auditing all the trusted functions, I came across the function that follows:

To bypass the hasAddr condition, all we have to do is set doc.Collab.initiatorEmail to ‘true’. Note that we cannot execute privileged code from there since this isn’t a function call but a member reference.

When I investigated Adobe Reader, I didn’t review its latest version by mistake. After I upgraded it, I found out this vulnerability was patched and previously discovered by MWR Labs (CVE-2015-4451).

Still, the way my exploit failed surprised me. An exception was raised when I copied the reference to the app.beginPriv function into fakeDoc.requestPermission.

JavaScript to the Rescue!

I tried to find a creative way to abuse JavaScript into copying a reference to app.beginPriv, and I came up with the following solution:

Rather than copying a reference to app.beginPriv straight from the global app object, I copied its prototype into another newly created object. Copying the prototype of an object means to copy all of its members and methods. I then gained a reference to beginPriv from that copied instance, which Adobe didn’t prevent. This means I can still abuse ANSendApprovalToAuthorEnabled into executing an arbitrary secured function.

In their presentation at DEFCON 2015, the HP ZDI team showed how to abuse such vulnerabilities into native code execution. This is done using undocumented, secured APIs that allow writing files to the disk. 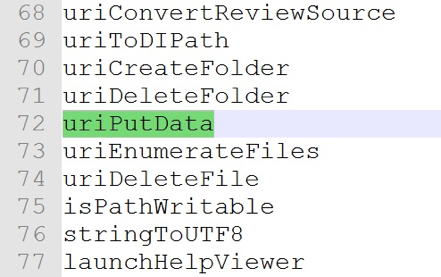 The function Collab.uriPutData can be used to write arbitrary files to the disk. The only thing is that it executes from the rendered process of Adobe Reader, which, in turn, executes at a low integrity level. This means that the locations where you can write files to are very limited. The strategy described in ZDI’s presentation only works for Adobe Acrobat Pro edition, which does not use the sandbox. They used Collab.uriPutData to write a DLL to the disk and abuse a DLL-hijacking bug in Adobe Reader to load it.

I tried to take a different approach that would work for the free edition of Adobe Reader too.

This is a secured function that launches the browser to a URL, supplied as an argument. By abusing the above privileged JavaScript vulnerability, an attacker can call it.

Calling this function I found out it launches the default browser. So I was wondering how it knows which executable file to launch (chrome.exe, firefox.exe, iexplore.exe, or any other browser).

Setting a breakpoint on kernel32!CreateProcessW, I noticed that it creates a process using shell32!ShellExecute.

The shell32!ShellExecute function is a winapi that launches the right process, given a file and an optional protocol handler. It knows which process to launch, matching a registry key for a protocol/extension. That is why the default browser is launched when calling app.launchURL – it registers itself as the handler of the ‘http:’ protocol. You can read more about it in the MSDN page for ShellExecute.

As opposed to what the documentation of app.launchURL states, you can launch a URL beginning with the ‘file://’. The only difference is that there’s a message box asking users whether they accept launching an application from that path. This means that we can call shell32!ShellExecute with an arbitrary path and an arbitrary extension. So I tried launching a PowerShell script ending with the ‘ps1’ extension.

That didn’t work; no PowerShell script was executed.

Adobe did think that giving the ability to call shell32!ShellExecute is dangerous, so they created a denylist for all extensions they think allow an attacker to execute arbitrary code. That denylist is found under the following registry key:

I reviewed the list, trying to find an extension Adobe forgot to denylist. They did quite a good job of excluding all trivial extensions. I noticed that they tried to prevent Python scripts from executing:

But they forgot to denylist the ‘.pyw’ extension, which corresponds to Python File (no console). This means that an attacker can execute arbitrary Python scripts (if installed) using app.launchURL.

The JavaScript engine that Adobe implements contains functions that can introduce potential security vulnerabilities. In order to enforce security measures for the JavaScript API, they introduced features such as secured and trusted functions. But it is possible to abuse the nature of the JavaScript language to cause some unexpected behaviors when combined with those security features. Their efforts to mitigate such issues are thorough, but there still appear to be viable exploitation pathways. We thank Adobe for their quick attention to the issues described in this post, and for the release of the October 6 patch.

Palo Alto Networks customers who deploy our Next-Generation Security Platform are protected from zero-day vulnerabilities such as these. Threat Prevention (an essential service for our next-generation firewalls that includes capabilities such as application control, IPS, anti-malware, and command and control protection), WildFire, and URL Filtering services provide our customers with comprehensive protection and automatic updates against previously unknown threats within as little as 5 minutes. 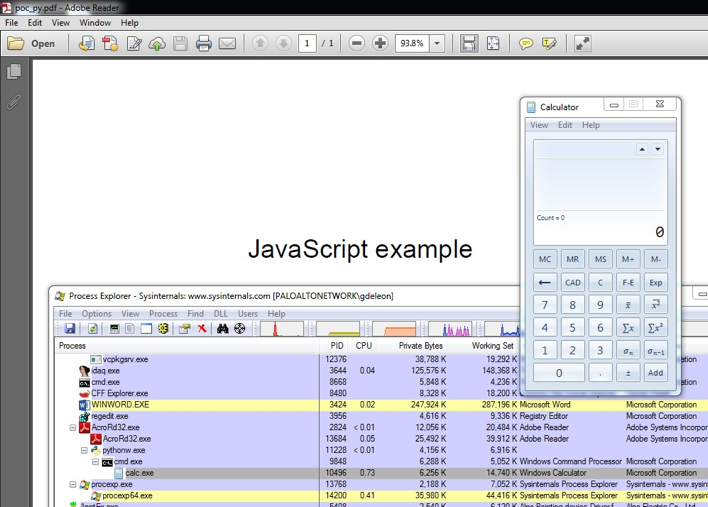