Unit 42 spent six months researching the China-based cybercrime group Rocke, which is the best-known threat actor engaged in cryptomining operations targeting the cloud. We released high-level results from our investigation of Rocke in our recent cloud threat report. This research report provides a deep dive into our investigation of Rocke, which concluded that the group is able to conduct operations with little interference and limited detection risk.

By analyzing NetFlow data from December 2018 to June 16, 2019, we found that 28.1% of the cloud environments we surveyed had at least one fully established network connection with at least one known Rocke command-and-control (C2) domain. Several of those organizations maintained near daily connections. Meanwhile, 20% of the organizations maintained hourly heartbeats consistent with Rocke tactics, techniques, and procedures (TTPs).

The activities of Rocke, aka the Iron Group, SystemTen, Kerberods/Khugepageds, and even ex-Rocke, were originally reported in August 2018. Researchers have since blogged on its use of the Golang programming language and the new backdoor, Godlua. There is an operational blog mapping Rocke operations to the MITRE ATT&CK framework. Unit 42 has also published blogs on the group’s Xbash ransomware tool and its cloud security evasion and cryptomining techniques.

Rocke was initially associated with ransomware campaigns through the use of its Linux-focused Xbash tool, a data-destruction malware similar in functionality to NotPetya. NotPetya used the EternalBlue exploit to propagate across a network. Xbash performed lateral movement by leveraging an organization’s unpatched vulnerabilities and use of weak passwords, which potentially limited its overall effectiveness. When Rocke compromised an organization, it demanded that victims pay 0.2, 0.15, or 0.02 bitcoin (BTC) to restore lost data. However, Rocke was unable to restore any data since Xbash deleted database tables prior to demanding the ransom. At the time of Unit 42’s reporting, Rocke’s BTC wallet contained 0.964 BTC (equivalent to US$10,130 today) from just 48 unique transfers.

Like Rocke’s Xbash malware, the group’s first cryptomining operations were written in Python and used Pastebin or GitHub as the code repository from which the first-stage payload was downloaded. As of March 12, 2019, Rocke actors began to also use Golang. The first-stage payload directed the victim system to connect to a hardcoded Rocke domain or IP address, which would trigger the download of the second-stage payload.

Unit 42 has observed a distinctive 12-step operation style, which appears to have remained consistent since Rocke was first reported:

As of the time of this writing, eight domains have been tied to Rocke C2 operations through hardcoded IP addresses, URL addresses, or domain registration connections (e.g., WHOIS registrant email address). The following chart lays out how the domains fit into the Rocke group infrastructure (see Table 1).

The TTPs listed in the previous section do not take into account a potential third stage to Rocke operations. Prior to the report An Analysis of Godlua Backdoor, Rocke malware appeared to perform a single operational function upon compromised cloud systems. The Godlua report cited malware samples that contained similar TTPs to those of Rocke. Upon further research, Unit 42 identified that not only do the TTPs match, but there are hardcoded domains, URLs, and an IP address that overlap with previously reported Rocke malware hardcoded values. This connection was made possible through the findings of an incident investigation posting on the r/LinuxMalware subreddit and the upload of the findings, including malware sample metadata, to GitHub. The author of the Reddit post operates the nonprofit organization MalwareMustDie, a white hat organization devoted to the reduction of internet malware. Unit 42 researchers analyzed four of the binaries listed in the Reddit thread and confirmed the hardcoded Rocke domain systemten[.]org contained within the samples, which was stated in the Reddit thread. The samples also contained hardcoded links to the Pastebin URLs that overlap with known Rocke reporting:

As seen within the Godlua blog, the IP address 104.238.151[.]101 and the URLs d.heheda[.]tk, c.heheda[.]tk, and dd.heheda[.]tk were found to be hardcoded within the report’s findings. The incident response thread posted to Reddit pertaining to the Rocke group also found that C2 connections were being sent to the three heheda[.]tk domains, which resolved to the IP address 104.238.151[.]101, also cited in the Godlua report. Additionally, the samples contained hardcoded values for the known Rocke domains of sowcar[.]com, z9ls[.]com, baocangwh[.]cn, gwjyhs[.]com, and w2wz[.]cn. See Figure 1 for how the identified indicators of compromise (IoCs) connect known Rocke domains with the IoCs pulled from the Godlua and Reddit thread IoC reporting. 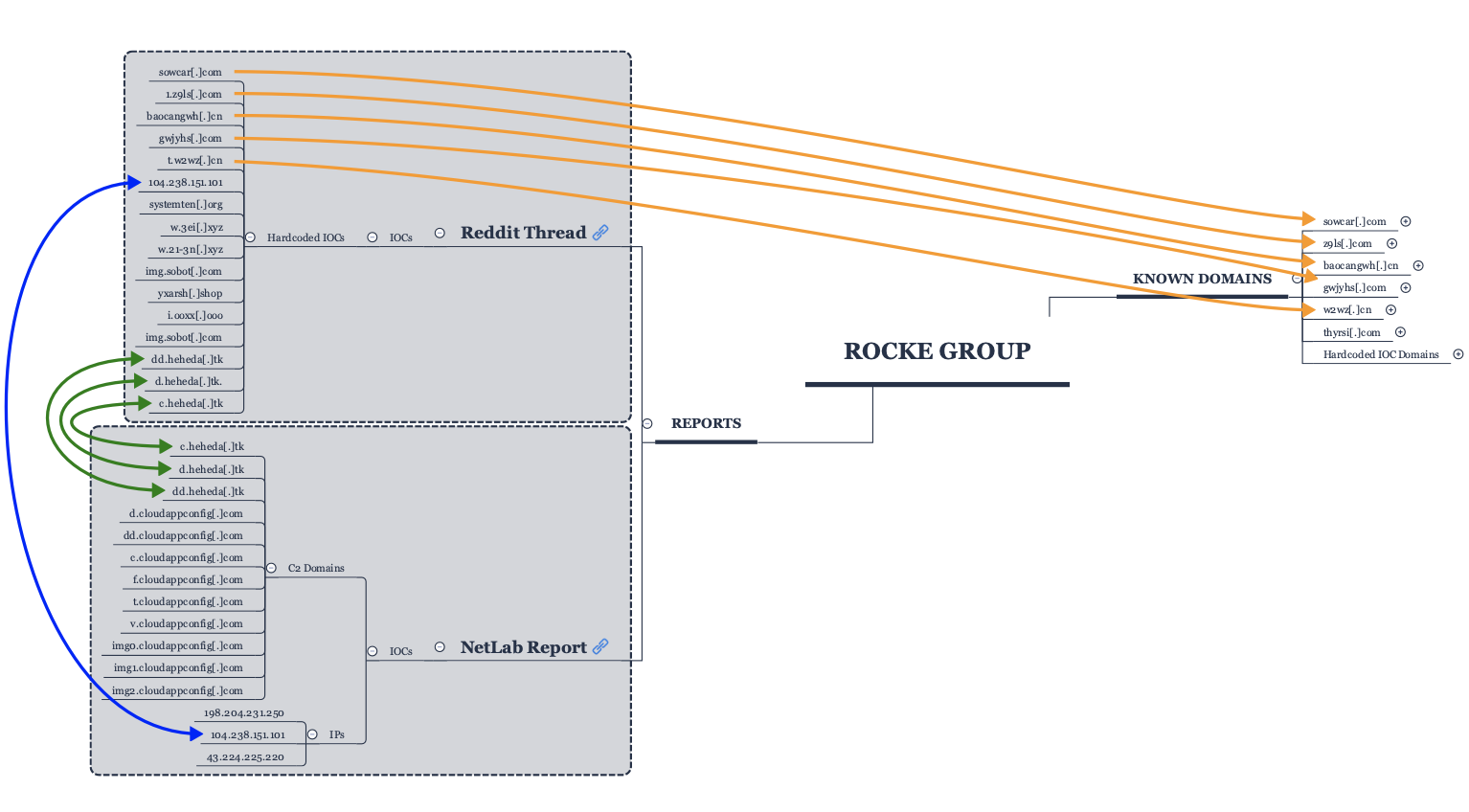 What makes the Godlua samples intriguing is the evidence that Rocke has added DoS operations to the group’s toolkit. The report delivers evidence that Rocke has added a third-stage malware component that performs a third C2 request to either c.heheda[.]tk or c.cloudappconfig[.]com and thereby downloads a LUA script called Godlua. The malware appears to provide a modular functionality to Rocke’s operational playbook. In addition to the DoS feature, the malware introduces the following new features:

The Godlua report also provided evidence that Rocke has added LUA switch functionality. The report states actors performed a DoS attack against the domain www.liuxiaobei[.]com. At the time of this writing, this domain does not resolve to any known system. It is currently unknown what functionality the other features of the Stage 3 malware accomplish. However, with options like “Shell,” “Shell2,” “Upgrade,” and “Proxy,” it is possible this malware is the beginning of a modular system agent that allows Rocke actors additional flexibility to perform cyber operations outside of cryptomining or data destruction.

Finding Rocke in the NetFlow

As of the time of this writing, Unit 42 researchers found 28.1% of cloud environments surveyed had at least one active communication session with known Rocke C2 domains. These connections occurred almost daily in some organizations from at least December 2018 until the time of this writing. Identification was made possible via the capture of NetFlow communications at the organization/cloud edge.

Hardcoded IP addresses provide strong connections to known malicious network traffic originating from an organization’s network. At the time of this writing, 104.238.151[.]101 is known to have resolved to the following URLs since January 1, 2019:

Unit 42 researchers extrapolated the investigation another level and identified all visible connections from all monitored organizations to all known Rocke domains. The researchers found that 28.1% of cloud environments contained at least one fully established network connection with a known Rocke domain. The earliest witnessed connection took place on December 4, 2018, and continued through at least June 10, 2019, with 146 unique connections to the domains sowcar[.]com and w2wz[.]cn during that time frame.

Finally, Unit 42 researchers attempted to identify if the initial payload downloaded from Pastebin could be identified with the NetFlow data. Researchers found that a total of 50 organizations made network connections to Pastebin. Of these 50 organizations, eight were found to have made network connections to Pastebin within the same hour as connections to Rocke domains. Since NetFlow traffic only allows for a granularity capability of one hour, and given the lack of full packet capture to confirm the nature of the network connection, it is impossible to positively identify precisely what time an organization was compromised. However, these occurrences point to key timeframes where full packet captures, if available, should be investigated further.

A distinct pattern emerges when viewing how Rocke network traffic appears within NetFlow data (see Figure 2). First, a connection is established with Pastebin, followed by a connection to a Rocke domain. As you can see from the image, the pattern repeats on an hourly basis, which is another indicator of beaconing capabilities and of the presence of the Stage 3 Rocke payload, which is already installed on the cloud system. Additionally, Figure 2 displays the unique occurrence of the source system connecting to Pastebin, then connecting to the known Rocke domains, z9ls[.]com, and systemten[.]org, connecting to the hardcoded IP address 104.238.151[.]101 in the same time frame. This pattern is indicative of a beaconing, or a heartbeat style of activity, which is a capability within the third-stage malware’s feature set. 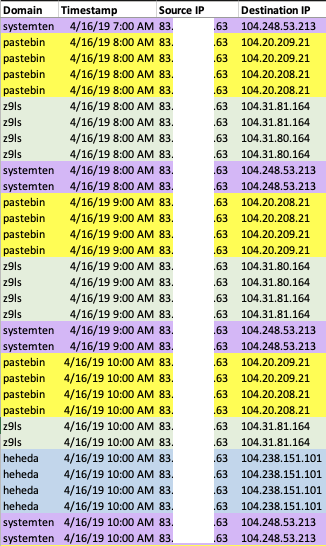 To mitigate Rocke activities within a cloud environment, the following actions are recommended:

AutoFocus customers can investigate this activity with the following tags: