This research explores the security landscape of the Internet-facing services hosted in Amazon AWS, Microsoft Azure and Google Cloud Platform. Public cloud is becoming increasingly popular and the reported total spending on cloud infrastructure grew 45.6% in 2018. Amazon AWS maintained its lead with a 31.3% share of the Cloud Service Provider (CSP) market, followed by Microsoft Azure with 16.5%, and Google Cloud Platform, with 9.5%. CSPs offer various “as-a-service” models that give businesses agility and flexibility to scale operations without worrying about the IT infrastructure. However, a single insecure configuration can put the entire infrastructure at risk.

We focused on evaluating public cloud from the publicly exposed hosts. We collected information including exposed services, service versions and service vulnerabilities to determine the security posture of each host. We also investigated the correlation between malicious IPs in public cloud and prior known vulnerabilities.Our analysis revealed that:

We also discovered evidence that attackers are using public cloud as a stepping stone to launch attacks. Cloud infrastructure is still considered more secure than on-premise infrastructure due to the significant resources that CSPs dedicate to maintaining and upgrading their infrastructure. AWS, Azure, and GCP each had less than 20 CVEs identified in 2018 as opposed to thousands of vulnerabilities found in Windows or Linux every year, according to the NIST National Vulnerability Database (NVD). However, there is no shortage of cloud security incidents across all CSPs. Examples include leaked voting machine passwords, the leak of Indian citizen records, and leaked user job profiles). Prior research from RedLock, NetSkope and McAfee showed that most cloud security incidents are attributed to misconfigurations by cloud customers, not the CSPs. While some security responsibilities have been gradually shifted from users to CSPs, users are always responsible for some security design and decisions. Secure cloud infrastructure can only be achieved when both CSPs and users fulfill their responsibilities.

This blog reviews the current state of the public cloud service providers, then provides details on exposed services, exposed vulnerabilities, and malicious IPs. We conclude with a set of open-source tools to help users secure their public cloud infrastructure.

A Glance at Public Cloud

CSPs offer various services that allow users to delegate infrastructure, operating systems, software platforms, and even functions to the cloud. Figure 1 shows the shared responsibility between users and cloud service provider. Delegating infrastructure to the cloud (Infrastructure as a service, or IaaS) gives users the highest control to manage their systems while delegating functions to the cloud (Functions as a Service, or FaaS) gives users the easiest way to run a piece of code without worrying about the platform, resilience, and scalability. This research shows that users make fewer security mistakes when more responsibilities are shifted to the cloud provider. 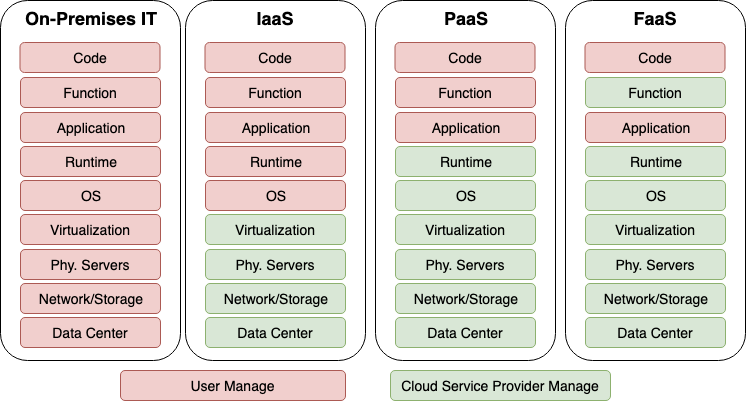 As AWS, Azure, and GCP together account for more than 60% of cloud market share, this research focuses only on these three CSPs. AWS, Azure, and GCP currently respectively each owns 41.8 million, 14 million, and 7 million IPv4 addresses, based on a review of the IP range that each CSP publishes . These addresses are spread across multiple cloud services, as shown in Table 1. This table only shows AWS and Azure, since GCP has not published the IP blocks of its individual services. Note that the majority of this research was done by finding the exposed hosts in these IP blocks and analyzing the services running on them.

Table 1. Number of public IPs that AWS and Azure allocate for the cloud services

To find the hosts and services exposed on the public cloud, we queried Shodan and Censys for the IP blocks owned by AWS, Azure and GCP. We found 9.3 million AWS hosts, 1.5 million Azure hosts, and 2.5 million GCP hosts. Our searches focused on eight services that are generally not secure enough to expose to the entire internet. Table 2 shows the result of these searches. It is shocking to see that 32% of the exposed hosts in public cloud have open SSH services. Although SSH is one of the most secure protocols, it is still too risky to expose this powerful service to the entire internet. Any misconfiguration or weak/leaked credentials can lead to host compromise. CIS benchmarks suggest inbound traffic to SSH services should be restricted to a small set of hosts. Curious to how secure these SSH servers are, we scanned all 2.8 million U.S. based SSH servers hosted in public cloud.

To have strong security, SSH servers should only be authenticated with a public/private key pair, as opposed to password-based authentication, because they are vulnerable to brute-force attacks. Much to our surprise, almost 50% of the SSH servers on Azure have password login enabled while less than 5% had it enabled on AWS and GCP (Table 3). We thought it was more than a coincidence since the difference was so large, so we dug into Azure cloud to investigate how these SSH services are created. We quickly found the explanation: most SSH services on Azure Virtual Machines are configured during the VM creation process. Figure 2 shows a screenshot of the SSH configuration on Azure. Azure gives users two options: password authentication or public key authentication. It is logical to think that half of the users would choose password authentication, likely because they don’t know how the public key authentication works or how to create a key. Nevertheless, it is easy to come up with or reuse a password, but creating a public key requires significant extra steps, as described in this Azure documentation.

This same behavior was not observed in AWS or GCP environments because neither of them offers password login as an option. AWS generates a new key pair and lets the user download the private key before the VM is launched (Figure 3). GCP also creates a key pair automatically upon VM creation and manages the keys inside the Compute Engine (Figure 4). This finding shows how much the UI design can steer user behavior and potentially move the system to a less secure state. 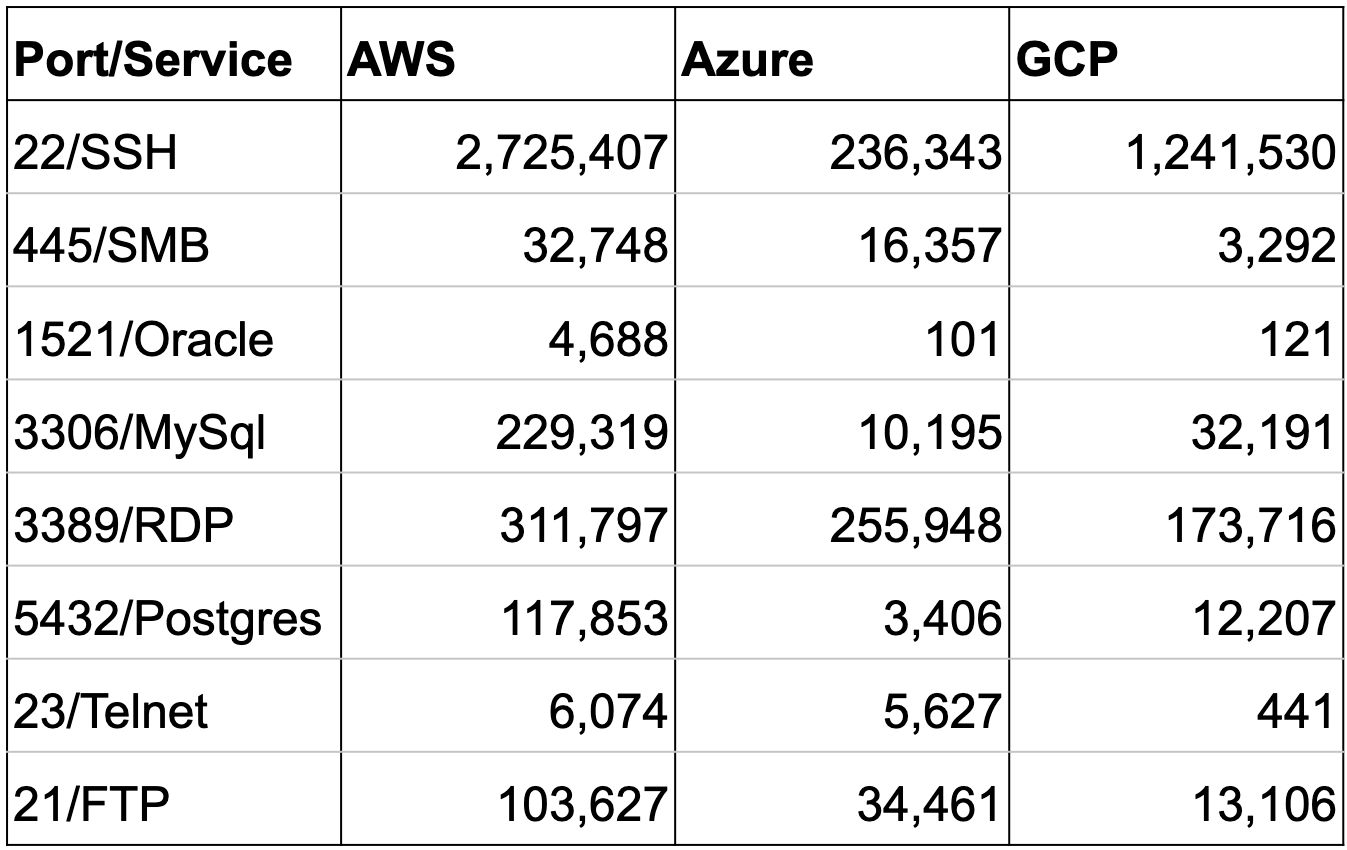 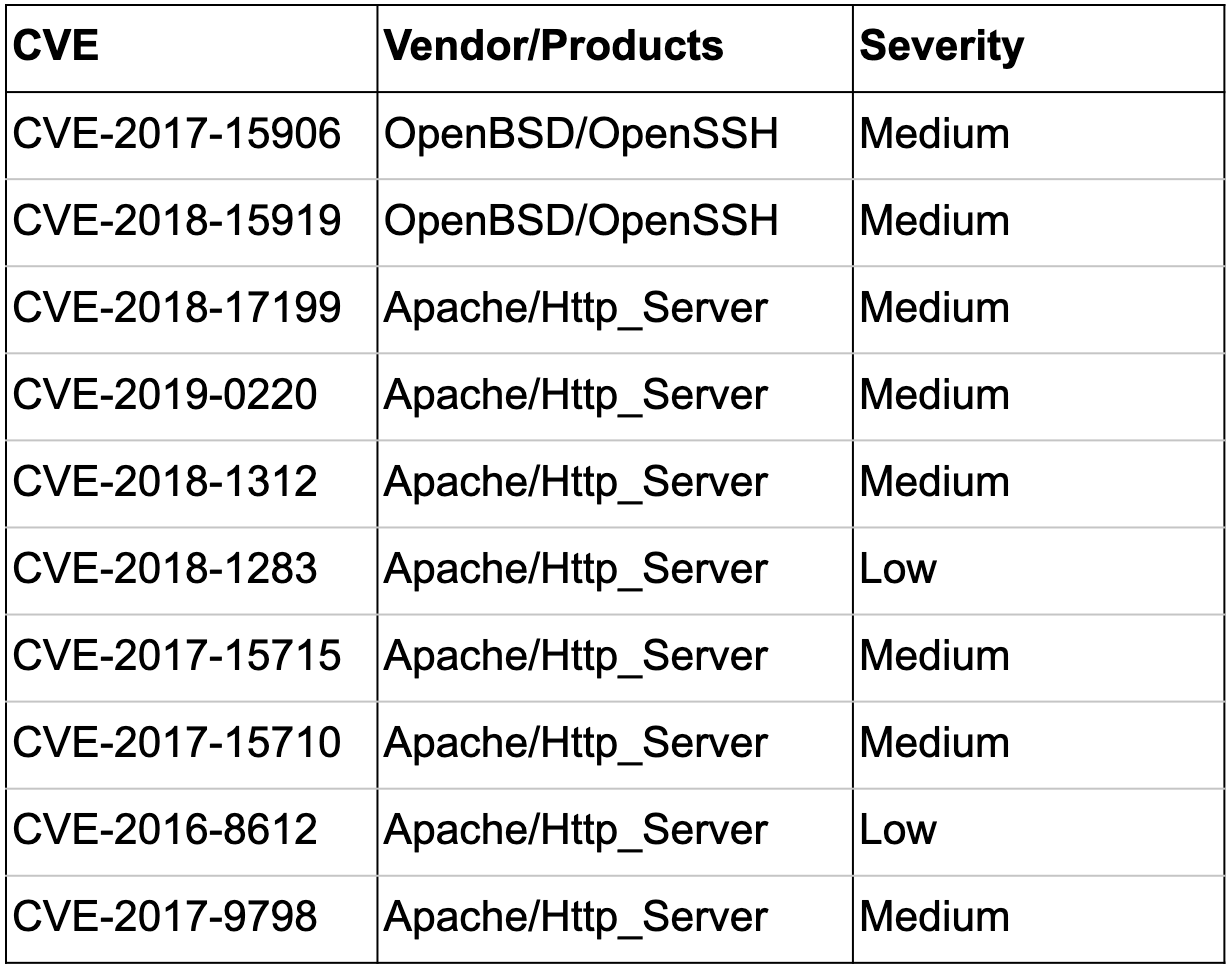 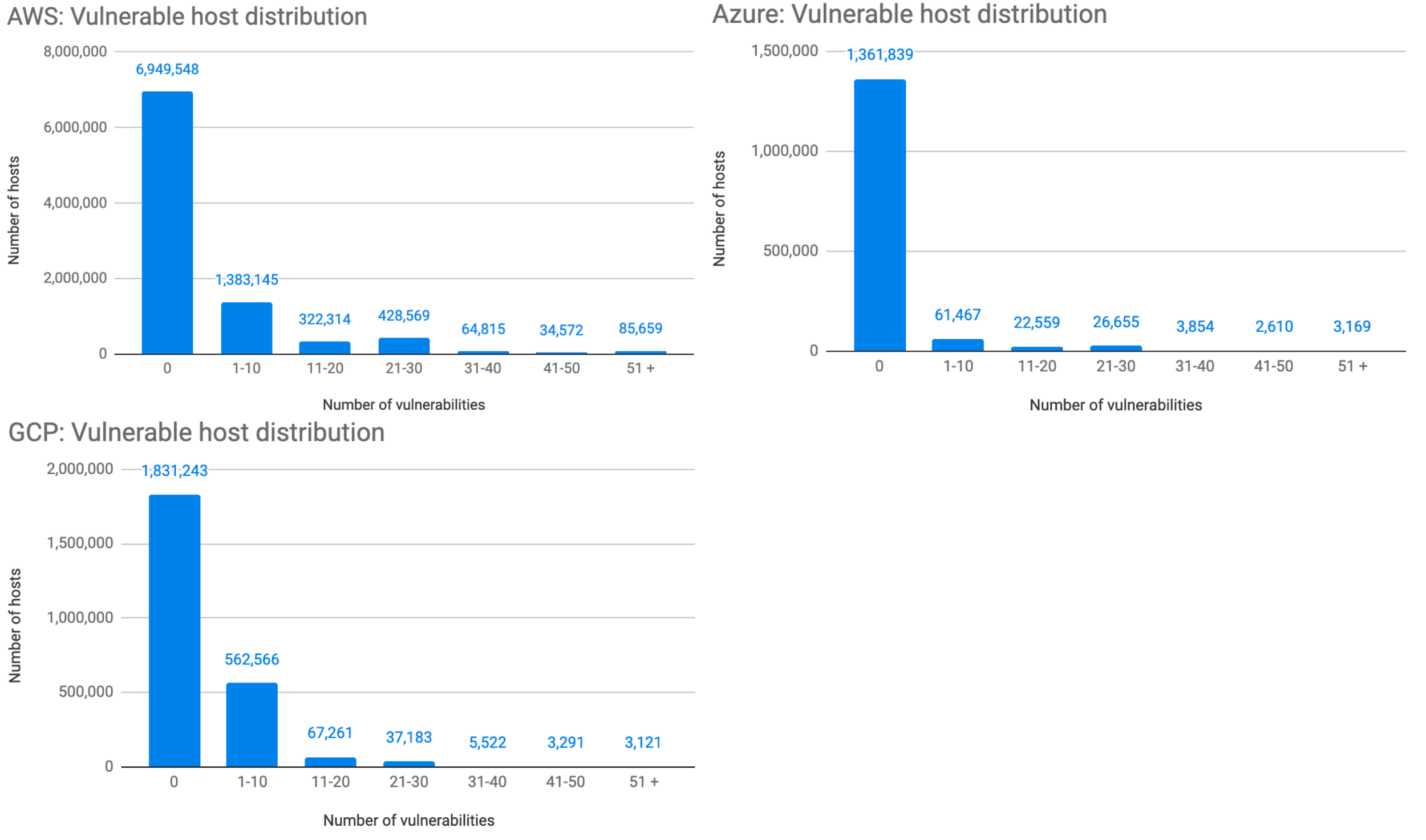 Figure 5. The number of hosts with different numbers of vulnerabilities in AWS, Azure, and GCP 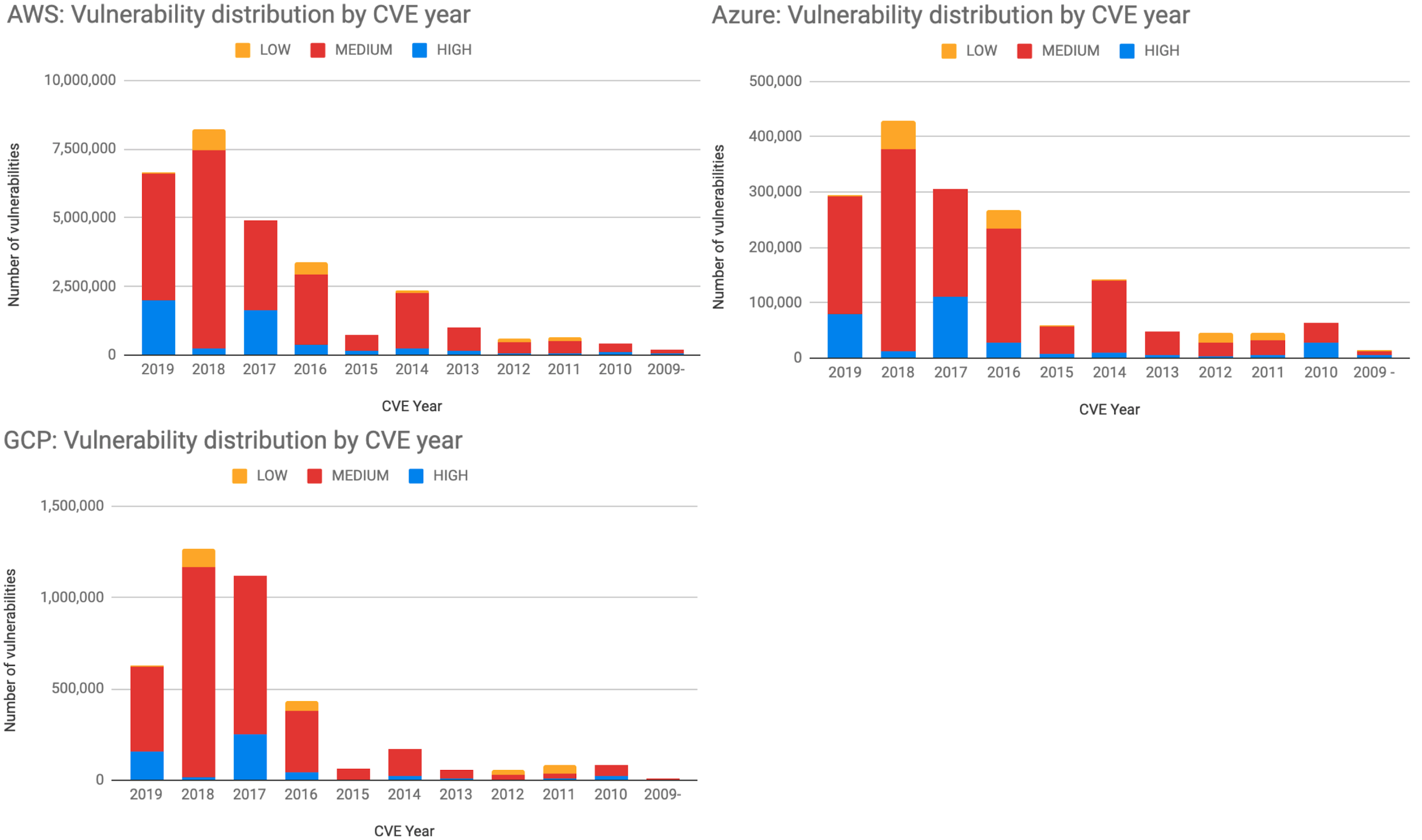 Figure 6. Number of vulnerabilities with different CVE year in AWS, Azure, and GCP

Secure Socket Layer (SSL) and Transport Layer Security (TLS) are fundamental to the modern web application security. They provide communication privacy and data integrity to the computer network. Many vulnerabilities were discovered in earlier versions of the protocols and a few of the severe vulnerabilities allow man-in-the-middle attacks. After examining all the exposed hosts with SSL/TLS configured, we found more than 61% were still using protocols older than TLS v1.2, as shown in Figure 7.

This number is worrisome as it’s been almost ten years since TLS v1.2 was released and both TLSv1.0 and TLSv1.1 are scheduled to retire in 2020. It is again not surprising to see that most of these outdated protocols are maintained by IaaS owners who are often behind the patching and update cycle. 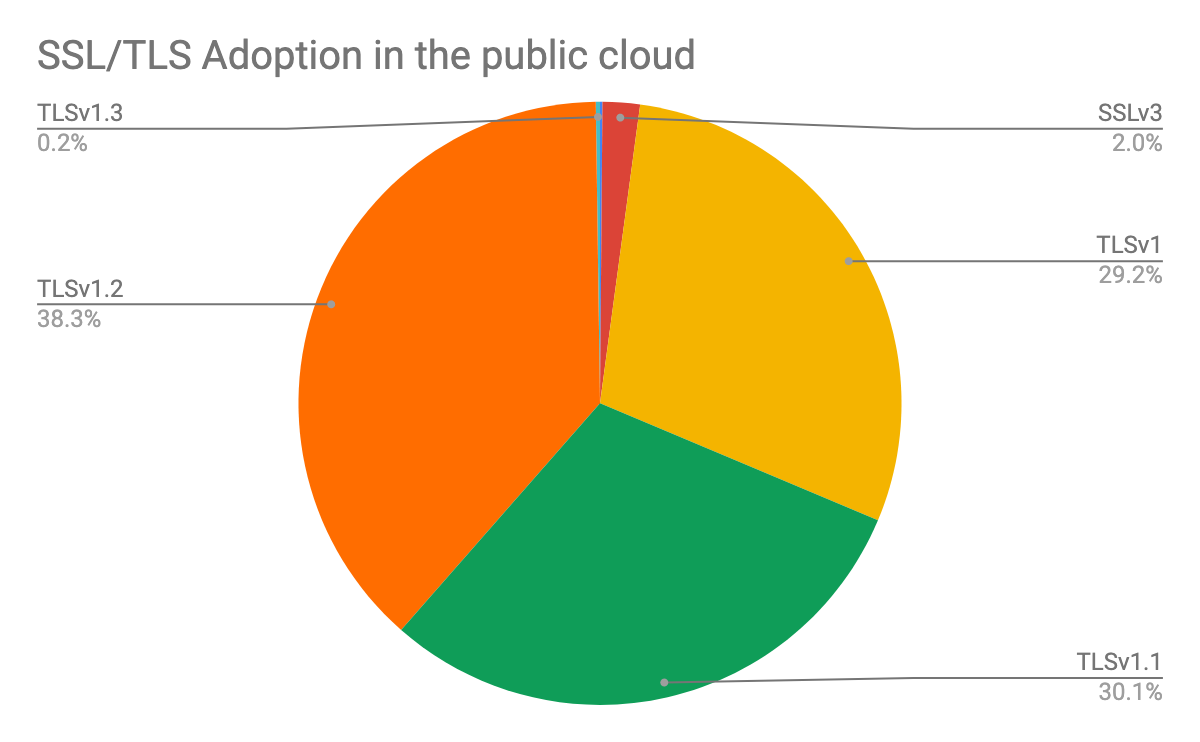 Public cloud not only simplifies developers and IT's work but also provides a platform for malicious actors to launch or pivot attacks. The vulnerable application services in public cloud create attack vectors into the cloud infrastructure. From an attacker's perspective, compromising a public cloud instance is not too different from compromising an on-premise server. However, knowing that an instance is hosted on a specific CSP, an attacker can better weaponize the exploit to evade surveillance. There is also a better chance that a compromised public cloud instance has higher computation power, in case of a crypto-jacking attack. Unit 42 has uncovered evidence that malicious actors are developing malware targeting public cloud infrastructure. To understand the problem, researchers analyzed the malicious IPs in 2018 from Facebook Threat Exchange. Out of the 16,764 malicious IPs, 985 originated from AWS, 109 originated from Azure, and 34 originated from GCP. A total of 7% of the reported IPs were from one of the three CSPs.

Public cloud adoption continues to accelerate as it plays an increasingly significant part in next-generation IT. Although Amazon launched AWS more than 13 years ago, CSPs started to focus more on security in recent years. About 75% of allAmazon cloud security products were launched within the last three years.

In public cloud, security is a shared responsibility between the CSP and the users. As there are so many cloud services in public cloud, most of the users are probably unaware of their security responsibilities. CSPs not only should secure their cloud services but also set up guardrails to prevent and detect insecure user behavior. The findings in this study reiterate the importance of “security by default.” If there were no insecure options, the users could not have made insecure decisions. If CSPs proactively monitored for insecure user behavior and alerted users with actionable remediation, there would not have been so many exposed services.

There are, however, still designs and decisions for which users should be responsible. Users need to have minimal security awareness to work in the cloud. Although Function-as-a-Service removes a lot of maintenance burden from the users, developers still need to write the code and assign proper permission to each function. If new vulnerabilities are found in the libraries that the functions use, only the developer can patch and update the source code. If CSP alerts an exposed SSH service and recommends a firewall configuration to restrict inbound traffic, only the system admins know what IPs the firewall should allowlist. These trivial tasks are too often neglected, which can lead to catastrophic outcomes. The sheer volume of security incidents caused by weak credentials or exposed databases have numbed the security community. Yet there is no sign that the number of related security incidents is slowing down. Different organizations simply repeat the same mistakes at different CSPs.

Perfect security is almost impossible, but one should always conduct due diligence to minimize the chance of compromise. Thanks to the open-source community, there are plenty of free tools to simplify a complex job. These tools that can help users bridge the security gap in their cloud infrastructure.

Vulnerability scanners: Developers should continuously scan their code for known vulnerabilities. Prisma Scan, Clair, OpenSCAP, and OpenVAS can identify the vulnerable packages in your system.

Exposed hosts and services monitoring: System administrators can monitor the IP blocks that they own from the internet. Shodan and Censys are IoT search engines that periodically scan the entire internet.